Samantha Barks, a Disney Princess Who Sings Like a Vocally an Old Soul

Samantha Barks, a Disney Princess Who Sings Like a Vocally an Old Soul 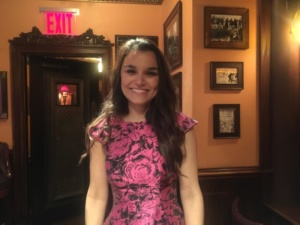 Looking like a Disney princess Ms. Barks took to the stage with Daniel Messé’s “Troublemaker,” the first single that was downloaded to youtube from her self titled album. This pop country song has a positive vibe.

In 2008 Samantha rose to fame on the BBC talent show ” I’d Do Anything.” At 17, she came in third place to play the role of Nancy in Oliver. Singing “As Long As He Needs Me,” Ms. Barks displayed powerful vocals, but she still needs to grow into the maturity of the song and allow it to encompass her being.

Kimberly Perry’s “If I Die Young,” was more age appropriate, as strains of Alanis Morisette, Rickie Lee Jones and tinges of an Ette James feel came through.

Ella Fitzgerald’s version of  “Summertime” was sung out of love for her sister, while The Beatles aching beautiful song about freedom “Blackbird,” was sung still, slow and luxuriously. I went and listened to Ms. Barks on youtube and the pairing of Billy Stritch as her musical director has helped immensely, to turn Ms. Barks into a first rate singer. It helps when your vocal range is flawless and your jazz influences are the best in the world.

It was on Randy Newman’s “When He Loved Me” that Ms. Barks emotions poured forth.

A fan of Justin Bieber, Samantha had the house rocking to “Love Yourself.” The 20 something girls at the table in front of me were in fan heaven.

My favorite piece of the night was the Burt Bacharach/Elvis Costello heartbreaker “This House Is Empty.”Ms. Barks connection to this material says she knows the loss of true love. The same was true of Katy Perry’s, “The One That Got Away.”

Joni Mitchell’s “Both Sides Now” was painstakingly drenched in a loss of innocents. It was at this moment that I felt I was listening to an old soul imparting wisdom.

In 2012, Samantha starred alongside Jonathan Bailey in the Disney Channel’s animated series, Groove High. In 2016 Jonathan and Samantha took on Jason Robert Brown’s The Last Five Years in London. After hearing Ms. Barks version of “I Can Do Better Than That,” I am sorry I never had the chance to see this production.

For her encore and as not to disappoint her audience “On my Own’, from Les Miserables ended the evening.

The set list was eclectic and not what you expect, but there is something about Ms. Barks voice, that makes you sit up and take notice. She is one of a kind and someone to watch as she matures and grows into a first rate star.