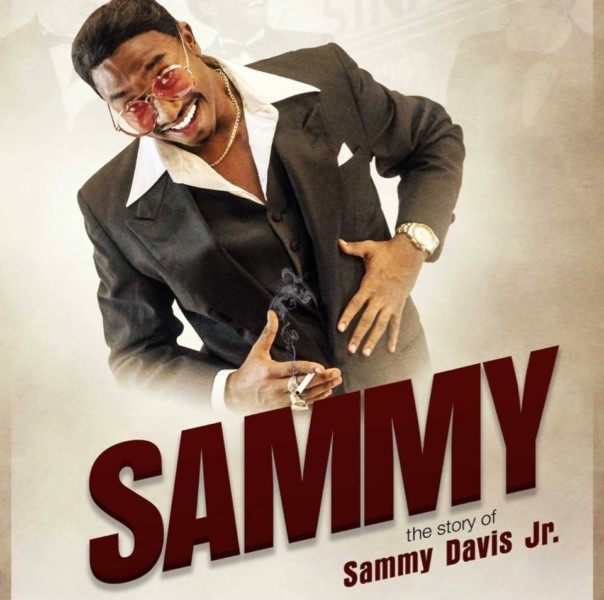 Sammy: A Tribute to Sammy Davis Jr. – That Old Black Magic Lingers On

Sammy: A Tribute to Sammy Davis Jr. – That Old Black Magic Lingers On 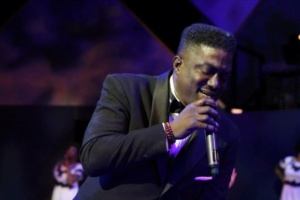 Winding down their Season of Dance, the Black Ensemble Theater concludes 2017 with a world premiere musical tribute to “The Candy Man” himself, Sammy: A Tribute to Sammy Davis Jr., now playing into the new year. Writer and Director, Daryl D. Brooks and his producing partner, Jackie Taylor, utilized a vast troupe of vocalists and hoofers in their two hour plus homage to the legendary showman. Sharing tales from Sammy’s early success in vaudeville, later Las Vegas days as an essential member of the notorious Rat Pack, as an activist for Civil Rights and a political advocate for a yet to be elected President Kennedy, and concluded with the yo-yo career successes and a glimpse into the personal life of the man.  While the transitions between staged vignettes and song are rough around the edges, once the music began, the show gelled. Not nearly as compelling as their award-winning tribute to Josephine Baker staged earlier this year, the Black Ensemble Theater’s Sammy: A Tribute to Sammy Davis Jr. proves “That Old Black Magic” continues on through Davis’ music, even decades after his demise, passing away from throat cancer at the age of 64 in Beverly Hills, California. 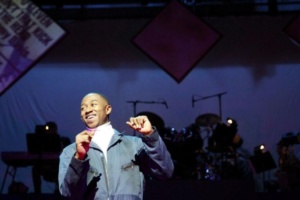 Born December 8, 1925 in Harlem, this tribute show chronicled Sammy’s life from his earliest childhood days spent tap dancing with with his father and Will Mastin as the Will Mastin Trio, Samuel George Davis Jr. next served in World War II, where he entertained fellow solders with his comical impressions of popular celebrities of the day, including Louis Armstrong. Destined for greatness early on, Sammy returned to performing after the war, where his star continued to perpetually rise. Impressing Frank Sinatra, Sammy quickly cemented his signature swagger, joining the elusive ranks of the Hollywood Rat Pack. Along with Sinatra, Dean Martin, Peter Lawford and Joey Bishop, Sammy transitioned next into film, appearing in the original Ocean’s 11, before dabbling in Broadway, starring in both Mr. Wonderful and Golden Boy. Best known for his early 1970’s pop hit “The Candy Man” Davis returned to headlining Vegas shows for years, where the press dubbed him the moniker “Mister Show Business.” 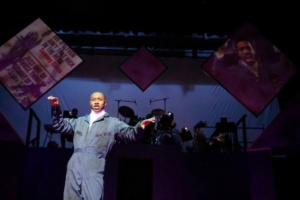 This Kennedy Center Honoree, NAACP and Grammy Lifetime Achievement Award-winner also faced terrible racism throughout his life and professional career. Many of these moments shared on stage here during brief vignettes between musical numbers. In 1957, Davis was involved in a secret relationship with then up-and-coming actress Kim Novak, when Columbia Pictures President, Harry Cohn, intervened, demanding their affair end and Davis marry a black woman within two days to quiet any career-killing controversy surrounding their forbidden romance. After that quickie nine month marriage ended in divorce, Davis’ married Swedish-born white actress May Britt. Keep in mind, interracial marriages were still illegal in over 30 states at the time. Davis campaigned tirelessly for then Presidential candidate John F. Kennedy, but was not invited to perform at the inauguration due to the color of his skin and the fact Davis was once again involved in an interracial relationship, pushing his wedding back until after the President was officially sworn in to office. Often not allowed to stay in the very hotels he was headlining, Davis drew a line in the proverbial sand, demanding to be treated like all of his white contemporaries. If Frank stayed in the Presidential Suite, there was no reason Sammy couldn’t have the Presidential Suite as well. Alas, Sammy fell into all the typical trappings of the celebrity lifestyle; addicted to attention, constant womanizing, excessive alcohol consumption, outlandish spending and more that plagued oh so many in the entertainment industry, including dying in debt to the Internal Revenue Service. 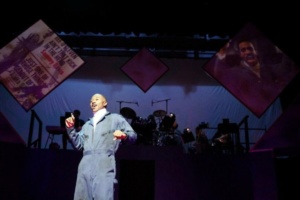 The true highlight from the intimacy of the 299 seat main stage auditorium is it allowed each audience member an up-close, bird’s eye seat to Rueben D. Echoles’ intricate tap choreography.  Cast member Kenny Davis did the best to capture the cadence of Sammy’s endearing vocal style while performing. Michael Adkins captured most of his electrifying dance moves too. The remaining cast, including Rhonda Preston, Linnea Norwood, Kylah Williams, Emily Hawkins, Dwight Neal, Trequon Tate, Mark Yacullo and Nathan Cooper all got their individual moment in the sun as well, crooming Davis’ genre-defying classics like “Irving Berlin’s “Cheek To Cheek”, “Fly Me To The Moon”, “Begin The Beguine”, Cole Porter’s “I’ve Got You Under My Skin” and “Won’t You Play Another Somebody Done Somebody Wrong Song” played to perfection by musical director Robert Reddrick and the Black Ensemble Orchestra. Aaron Quick’s ever changing projections included photos of Davis throughout his lifetime on screens hovering over a set crafted by Denise Karczewski. Alexia Rutherford’s gowns adorn the ladies with enough sparkle to satisfy even the most casual of fans. 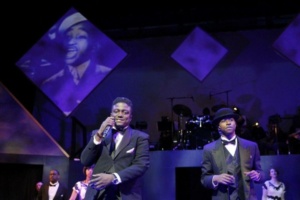 Sammy: A Tribute to Sammy Davis Jr. showcased the evolution of a man who defied the odds and did it his way. Conquering both personal and profession demons while paving the way for generations of performers to follow, this tribute offered behind the curtain tidbits into the life of the legendary showman. “Mr. Bojangles” himself would feel honored.