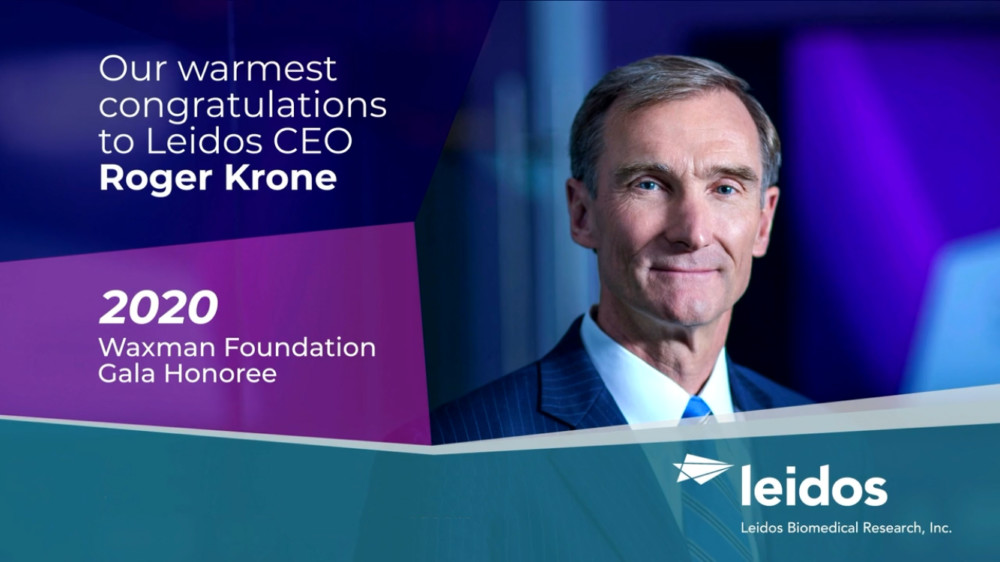 The Samuel Waxman Cancer Research Foundation (SWCRF) announced that the 44-year-old biomedical research non-profit honored Leidos Chairman and Chief Executive Officer Roger A. Krone at its annual Collaborating for a Cure Gala. The SWCRF recognized Mr. Krone for his commitment to improving health and communities through philanthropy and his prominence as a global leader. The award was presented yesterday at the virtual streaming of the SWCRF 23rd Collaborating for a Cure Gala that drew nearly 800 viewers.

“From addressing opioid addiction to supporting military veterans, Roger and Leidos have a track record of leading philanthropic and community support to address some of today’s most urgent health and social challenges. Leidos is at the forefront of health information technology and innovative research of cancer, HIV, and infectious diseases. We are delighted to recognize you, Roger, for your support of the SWCRF and our quest to realize a world without cancer,” said Samuel Waxman, M.D., Founder and Chief Executive Officer at SWCRF.

“It’s an honor to be recognized by the Samuel Waxman Cancer Research Foundation,” said Mr. Krone. “The Frederick National Laboratory for Cancer Research, currently operated by Leidos Biomedical Research on behalf of the National Cancer Institute, works on the forefront of basic, translational and clinical science. I am confident with the great minds at labs like Frederick, and with the generosity of caring people like you, we will decode cancer once and for all. Thank you again for this honor.

The SWCRF Collaborating for a Cure Gala is one of New York City’s most anticipated charity events that kicks off the holiday season and typically attracts more than 1,000 guests. This year, the SWRF held its first-ever virtual Gala, which raised $2 million to maintain more than 50 research programs and collaborations. To date, the event has raised more than $40 million for the SWCRF cancer research programs.

“This year has been difficult for all of us, and we are moved tremendously by the generous spirit displayed by so many longtime and new donors. The trust they place in the SWCRF and our innovative approaches to cancer research is a testament to a unified effort to end cancer, one of the world’s most devastating diseases. The support raised during unprecedented health and economic challenges facing the nation will enable the SWCRF to maintain its research programs. These programs address 14 types of cancers and tackle aging as the single highest risk factor for developing cancer, through our Partnership for Aging and Cancer Research program,” said William T. Sullivan, Executive Director, SWCRF.