Santasia Get Your Jolly On

Santasia Get Your Jolly On 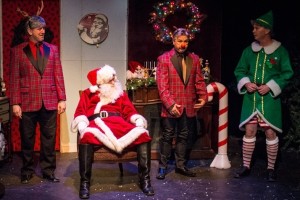 If you believe in flying penguins and the Virgin Mary then Santasia at St Luke’s Theatre is the show for you. Never before have the actors had more fun than the audience and that is saying a lot. Part SNL, Jerry Springer, Godfather, dysfunctional family, with a cast of Christmas characters and traditions all meshed together to make your side split. This show will have you laughing so hard you’ll be crying. Returning for the 16th year Santasia is music, dance, video, and humor along with some more serious sides of the season.

Imagine six grown men who prance, dance, and sing while portraying three wise men in competition for gifts for the baby Jesus or as take care of your reindeer and get them spaded slides across the screen. My favorite skit was the Jerry Springer DNA test and the toilet roll stocking gift. There are no Scrooge’s in this group of writers/comedians with a combined total of 24 years experience across the board in TV, film and theater. Created by two in sync brothers, Brandon and Shaun Loeser,  James Elden, Lon Gowan, Chey Kenedy, Rusty Locke, Richard Lee Warren and Thomas Vu all joined in. Shaun besides wearing an elf hat is the director and set designer. The entire team is also the producers of the show. A special nod to Tania Pearson-Loeser for her excellent choreography.

This show is 2 hours of fun and entertainment all wrapped up in a clever delightful way.

We recommending taking the Santasia pill, but beware of the side effects…laughter.

G. H. HARDINGJanuary 17, 2022
Read More
Scroll for more
Tap
No More Sad Things – Subtle and Scandalous
Melissa Errico’s What About Today?‏ Live at 54 BELOW DVD to be Released 12/15