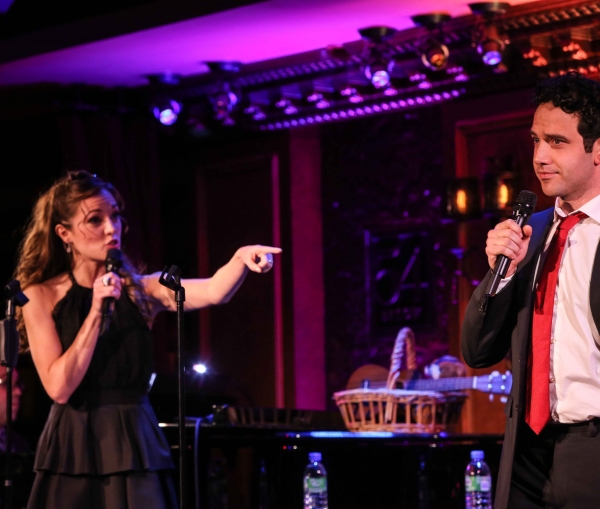 Suzanna Bowling
Tony Award nominees Santino Fontana and Laura Osnes will perform a one-night-only reading of the Tony nominated playwright Ken Ludwig’s (Lend Me A Tenor, Crazy For You) brand new play Dear Jack, Dear Louise at Theater J in Washington DC on Thursday, November 1 at 6:30 p.m.
The reading — directed by the playwright, a longtime resident of Washington, DC — will benefit Theater J, which supports the nation’s most distinctive and progressive Jewish theater.  This special evening will  take place at Arena Stage at the Mead Center for American Theater.
Dear Jack, Dear Louise tells the true story of the courtship of Ludwig’s own parents. The time is 1942, and U.S. Army Captain Jacob S. Ludwig, stationed in Oregon, has become pen pals with Louise Rabiner, an aspiring actress in New York City. Through letters, notes, and telegrams, the young Jewish lovers must find their way toward each other—even though they have never met.
Santino Fontana and Laura Osnes, in the title roles, have already established their on-stage chemistry playing Prince Charming and Cinderella opposite one another in Rodgers and Hammerstein’s Cinderella on Broadway. Both received Tony Award nominations for their performances.
Ken Ludwig is one of the most produced playwrights in the U.S. with a roster of celebrated works including Lend Me A Tenor, Murder On The Orient Express, and the book of the Tony winning Gershwin musical Crazy For You.
Tickets to the November 1 benefit are on sale to the general public starting at $300.
Photo by Stephen Sorokoff
Related ItemsCinderellaDear Jack Dear LouiseKen LudwigLaura OsnesNewSantino FontanaStephen Sorokoff
Events

Suzanna BowlingOctober 18, 2020
Read More
Scroll for more
Tap
Broadway and Off Broadway Openings For November
The Personal Property of Bernie Taupin Goes Up For Auction