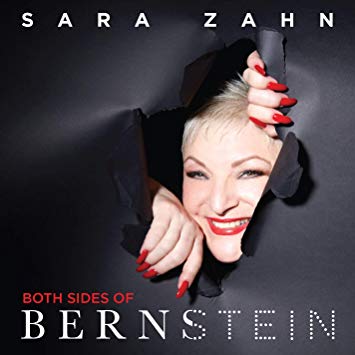 Sara Zahn’s homage to Leonard Bernstein is a year late, or rather 27 years late. Originally recorded in 1994 at the end of a Philadelphia engagement, Both Sides of Bernstein is a well thought out retrospect. The CD release at The Laurie Beechman was a special tribute that honored this phenomenal composer in multiple ways.

Ms. Zahn has been working in show business for over 50 years as an award-winning songwriter and familiar singing voice on TV shows, animated films, jingles and voiceovers. Her cabaret shows have earned her a Backstage Bistro Award for Outstanding Female Vocalist and The Hanson Award from MAC (Manhattan Association of Cabarets and Clubs).

Zahn delivers as she started off with “Cool” from West Side Story. “Conquering the City” was a cut song from Wonderful Town, that blended into “Little White House”, “Take Care of This House” from 1600 Pennsylvania Ave, which made you want to re-visit this score.

A jazzy “I Can Cook, Too” from On The Town, a tender “Spring Will Come Again” From Skin of Our Teeth and “Story Of My Life” a gem cut from Wonderful Town gave us insight into these wonderful shows.

Allan Kashkin, Zahn’s amazing husband on piano is a true treasure. This man generously backs up his wife with love and panache. I have never heard Bernstein played better.

The album has 20 tracks and all were sung. What was so delightful about this evening was there were two songs I had not know, because they had been cut from shows I saw.

I fell in love with the heartfelt “I Love This Land” from 1600 Pennsylvania Ave. “Make Our Garden Grow” from Candide ended the program.

Director Barry Kleinbort, kept the evening loose and natural. Though I would have loved some Trouble in Tahiti or Mass thrown in.

To make the album, the audiotapes from 1994 found their way to Harbinger Records/The Musical Theater Project. The album has Rod Derefinko on the keys.

Sara Zahn: Both Sides of Bernstein is a must for any Bernstein lover or lover of music.