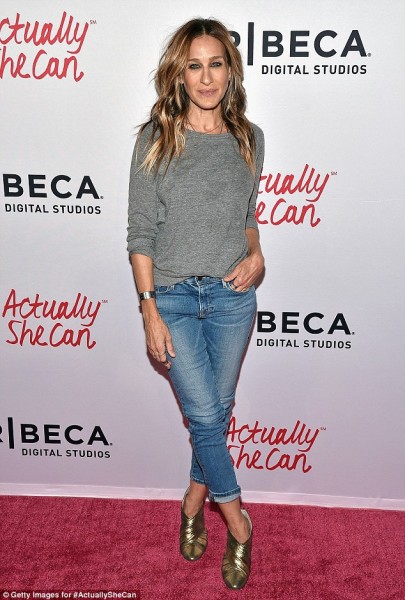 the New York Hilton Midtown hotel, located at 1335 6th Ave. Actor and CBS Commentator Nancy Giles will emcee the afternoon’s event, which celebrates women of outstanding vision and achievement both in front of and behind the camera in film, television and digital media.

The honorees for this year’s Muse Awards are some of the most extraordinary women in the business: Sarah Jessica Parker, a New York City icon and one of the most well-known actors and producers of our time; Lisa Nishimura, Academy and Emmy Award winning Vice President of Original Documentary and Comedy Programming at Netflix; and Ellen Burstyn, is one of the few actresses with the Triple Crown of Acting after winning multiple Academy Awards, two Emmy Awards and a Tony Award.

The 13th Annual Loreen Arbus Changemaker Award, created with the generous support of NYWIFT member Loreen Arbus, is given to an individual, organization or corporation in the entertainment industry that has helped to create and bring about significant change to benefit and aid women; this year it will be presented to Maysoon Zayid, a comedian, writer and producer, as well as a fierce disability advocate. In its second year, the Nancy Malone Directing Award will be awarded to film and television director Tricia Brock (The Walking Dead, 30 Rock, Younger, Mr. Robot). The award is named for Nancy Malone, an Emmy Award-winning producer and director, one of the first female directors in television, and a founding member of Women in Film in Los Angeles who dedicated her life to women’s advancement in TV, film and digital media.

NYWIFT is also proud to announce that Terry Lawler, NYWIFT’s Executive Director, will be presented with this year’s Made in NY Award from the New York City Mayor’s Office of Media & Entertainment. After a long and devoted membership, Lawler joined the staff as Executive Director in June 1997, at the start of NYWIFT’s 20th anniversary year. Not only has Lawler guided the organization through massive organizational growth, she has also led NYWIFT through enormous change in the industry at large. She spearheaded its move to online communications and the inclusion of the “digital media” industry, alongside film and television, in the organization’s programming and membership outreach. She also significantly enhanced membership diversification across occupations with more members represented in the below-the-line crafts, as well as age, race and ethnicity and, yes, gender. Moreover, she has revitalized NYWIFT’s advocacy initiatives and strengthened relationships with important governmental, industry and media partners.

Established in 2006, the Made in NY Awards celebrate excellence in New York City’s creative community and recognize the achievements of individuals and organizations that have made significant contributions to the City’s media and entertainment industries. Other recent honorees include Alysia Reiner, Michael K. Williams and Judith Light.

“I am thrilled to present Terry with the ‘Made in NY’ Award, which recognizes her steadfast commitment to supporting women in the City’s creative community,” said Media and Entertainment Commissioner Julie Menin. “The City is grateful for her more than two decades of leadership as Executive Director of New York Women in Film & Television, where she not only diversified membership across age, race and gender, but also spearheaded numerous innovative programs that provide women with more career, funding and mentoring opportunities to find success in the creative fields. Supporting equity and inclusion is more critical than ever and Terry has been a leader in empowering and lifting up women’s voices.”

“I’m truly honored to be receiving the Made in NY Award at the Muse Awards this year,” said New York Women in Film & Television Executive Director Terry Lawler. “After 21 years with NYWIFT, I couldn’t imagine a better way to complete my hugely satisfying tenure as Executive Director. The progress we have made in helping to move women to the forefront of many entertainment mediums is something I am not only genuinely proud of, but so truly thankful for. I have loved every wonderful, challenging and rewarding moment of my stewardship. I will miss my colleagues dearly, but I know I leave the organization in marvelous and highly competent hands, and look forward to welcoming incoming Executive Director Cynthia Lopez as she takes the helm.”

“Now in its 39th year, the Muse Awards continues NYWIFT’s long tradition and dedication to applauding the work and achievements of women in our industry, said New York Women in Film & Television Board President Simone Pero. We are thrilled to honor this year’s incredible roster of accomplished women, and also look forward to toasting our beloved Terry Lawler in gratitude for all she has done not only for individual members and for the organization as a whole but also for NYWIFT’s mission of equality in our industry.”

Tickets are $165 for most New York Women in Film & Television members and $350 for nonmembers. Corporate tables for $3500 or sponsorships starting at $5000 are also available. To purchase, please visit nywift.org/MUSE.

G. H. HARDINGJanuary 20, 2023
Read More
Scroll for more
Tap
Rebel Wilson Will Tap Dance on The Big Screen as Jennyanydots in CATS
Creed II Hits The Target But It’s One That’s Not So Hard To Hit