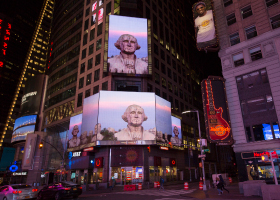 Save The Presidents Comes To Times Square

Save The Presidents Comes To Times Square

For the month of Washington’s and Lincoln’s Birthdays, Times Square Arts presents a “day in the life” portrait of 43 monumental busts of former American Presidents by artists  Tali Keren and Alex Strada. Rescued from the site of a closing sculpture park near Williamsburg, Virginia by the entrepreneur who was hired to demolish them, the statues sit, damaged but steadfast, in the light of the sun and the darkness of night.

“By showing Save the Presidents as the Midnight Moment for February 2018, we are excited to bring a surreal farm and worksite in rural Virginia to the center of commerce, traffic and tourism in New York City. The film is slow and quiet – a stark contrast to the buzz of Times Square. At the same time, both spaces are monumental and fantastical.

Save the Presidents explores the promise and instability of political representation, while questioning mythologies of democracy, power and gender. It functions as a Rorschach test onto which Times Square pedestrians may naturally project their political fantasies and associations. In our current, precarious political moment, the work encourages a reassessment and reimagining of the history and future of the American presidency.”