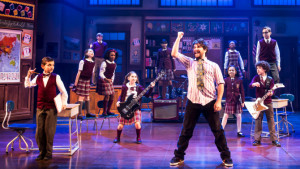 School of Rock – The Musical will hold an open casting call for a new wave of pint-size rockers, offering the once-in-a-lifetime chance to join the most famous kid band of all time.

A massive open casting call will take place in New York City on Friday, February 26, 2016 at Broadway’s Winter Garden Theatre (1634 Broadway), the home of Broadway’s newest record-breaking musical, School of Rock. The open call will begin at 10:00 a.m. (local time), with sign-in beginning at 9:00 a.m. and ending at 12 p.m.

An online contest will offer hopefuls the chance to win a trip to NYC with a guaranteed audition slot and tickets to see School of Rock – The Musical.  The creative team will select the top 10 participants for the grand prize. Three additional participants will win a one-season scholarship to The School of Rock, including three months of rock star training and an end-of-season performance. To enter the contest, hopefuls should visit: www.schoolofrockthemusical.com/auditions-contest/  Entries will be accepted through Wednesday, February 15, 2016 and winners will be announced onFriday, February 19, 2016.

The open call is open to kids of all ethnicities ages 9-12 who are under 5’ tall and play an instrument. This audition is exclusively for girls who play bass and boys who play guitar, piano, and drums. Kids should come prepared with a headshot and resume (if you have one) and ready to rock out.  Drums, keyboard, and amps will be provided.

Based on the smash hit 2003 film of the same title, School of Rock – The Musical features music from the movie, as well as an original score by Andrew Lloyd Webber and lyricist Glenn Slater, with a book by Julian Fellowes and direction by Laurence Connor.

School of Rock — The Musical is produced on Broadway by Andrew Lloyd Webber for The Really Useful Group, Warner Music Group & Access Industries, The Shubert Organization, and The Nederlander Organization. Nina Lannan and Madeleine Lloyd Webber serve as Executive Producers.