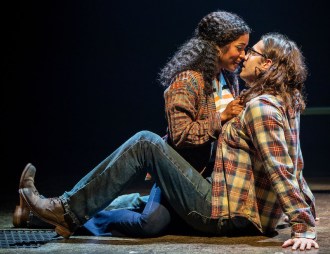 There will be many who will not be in love with the new musical Scotland, PA., based on the Billy Morrissette’s 2001 movie of the same name and a corporate take on Macbeth. However there are some very clever pieces to this slasher/sci-fi/cult musical. And yes, this will become a cult musical like Sweeney Todd, Bat Boy, Little Shop of Horrors, Carrie, Heathers, Jekyll & Hyde, The Rocky Horror Show, The Toxic Avenger, Eating Raoul, Harold and Maude, Urinetown and I am sure I missed one or two.

The time is 1975 and a group of stonners Hector (Kaleb Wells), Stacy (Wonu Ogunfowora) and Jessie (Alysha Umphress) predict the future and the death of Mac (Ryan McCartan).

Cut to a fast-food restaurant owned by Duncan (Jeb Brown) in Scotland, PA. His workers consist of Mac, who has ideas on how to make Duncan’s ahead of its time with drive through windows. He keeps getting passed over for promotion to manager by Doug (David Rossmer), who has been embezzling the restaurant’s money. Mac’s wife Pat (Taylor Iman Jones) is none too thrilled with their life and wants more.

Suddenly Mac starts hearing the voices of the stonners in his head who tell him he is destined for more. Pat decides she that Mac should rob Duncan’s in a staged robbery. They will use a party for Duncan’s dim-witted best friend Banko (Jay Armstrong Johnson), as their alibi. Things go bad at the robbery and Duncan, ends up head first in a fryer that splatters and burns Pat’s hand.

Mac and Pat buy Duncan’s from Malcolm (Will Meyers ), Duncan’s son who hated his dad. They turn Duncan’s into McBeths, a thriving new space (think McDonalds) using all of Mac’s ideas.

Enter Investigator McDuff (Megan Lawrence) and needless to say as with the story MacBeth, most people you have come to know, die tragically.

The cast is first rate, with vocals thrilling. Adam Gwon wrote some gorgeous harmonies for this and the show is really well sung. Do not expect the same kind of sound of Adam Gwon’s Ordinary Days. This is more like Bat Boy.

Jay Armstrong Johnson nails “Kick Ass Party”, as does Will Meyers with “Why I Love Football.” Megan Lawrence almost seals the show with “”Peg McDuff is On the Case” (Think “Don’t Break the Rules” from Catch Me If You Can). “The show’s orchestrations by Frank Galgano and Matt Castle give a homage to every sci-fi/ slasher/ cult musical. It was intelligent and a lot of fun catching them, though I doubt most people will pick up in this. Sadly we wish more for this impressive cast.

It is the book by Michael Mitnick that doesn’t hit the mark. It is not as funny as it should be.

This show may not find love in New York, but regionally and in schools I think it will become a cult favorite.

Suzanna BowlingNovember 19, 2020
Read More
Scroll for more
Tap
Molly Sweeney a Look at How Ones Person World May Upset the Norm
He Says: Forbidden Broadway: The Next Generation Sparkles Like a Fake Diamond that Ain’t Too Proud to be Rude and Witty