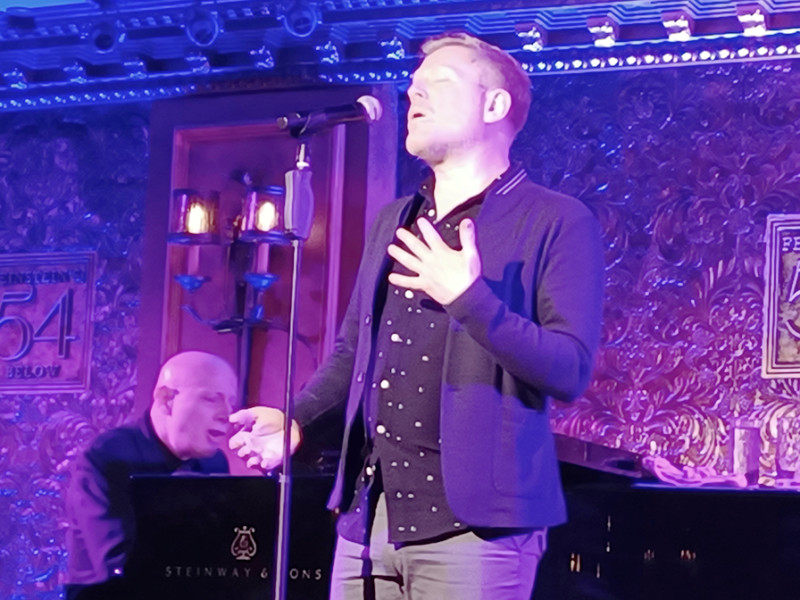 Anthony Rapp has been performing onstage since he was 9 years old.  So it’s not surprising that the star of such musicals as “Rent”, “Hedwig and the Angry Itch” and the 1999 revival of “You’re a Good Man, Charlie Brown” should create a cabaret show for Feinstein’s/54 Below based on the chronology of his life as a performer.

These songs were  “snapshots”, as he said, of particular moments in his life. For this evening, he chose moments in time from shows with which he had been affiliated, or writers he admired, or songs he had written that captured particular emotional moments for him. Many of those were deeply melancholic and filled with longings such as we all feel from time to time.

I would have liked a little more sharing of his personal relationship to some of the material he chose to set up that chronology, besides that it came from a show he had done or a writer he admired. But on Sunday night at 54 Below, Mr. Rapp let the music speak mostly for itself.

Mr. Rapp has an irresistible, natural pop/rock voice, and he is drawn to such songs which suit him, as well as musical theater songs.  From the very beginning, Mr. Rapp took us to an emotional landscape much rockier and darker than the typical, upbeat cabaret show would do.

His opening number, “Losing My Religion” as recorded by R.E.M., was the story of an unrequited love by a “hurt, lost and blinded fool”.  He followed that with “Origins of Love” from “Hedwig,” another song of emotional heartache which describes love as emerging from the anger of the primitive gods. “You had blood on your face; I had blood in your eyes. The pain down in your soul… was the same as the one down in mine…we called it love.”

Rock songs tend to be more poetic and oblique than traditional musical theater songs. So it took a while for my ears to tune in fully. It was also a surprisingly dark way to start a show, although fully in keeping with the emotional tone of the evening.

As a performer, Mr. Rapp deeply embodies the emotional struggle of the Everyman, which we all feel privately from time to time.  “Creep” from “Feeling Electric” (the early version of “Next to Normal”), “Waving through a Window” from  “Dear Evan Hansen”, “Everybody Hurts” also as recorded by R.E.M., and his gender bending version of “Wait For It” from “Hamilton” were a few of the songs that shaped the intense emotional center of his show. His voice grew in power, and the emotions grew in depth, with each successive song, drawing us in until the entire audience was deeply moved by his intimacy.

His selections included several songs he had written himself. All of them, including “Perfect,” “Now I Know”and the ode to his dying mother, “Visits to You,” were quite good. As cabaret is so much about direct connection with the performer, I really enjoyed being given this very personal musical window into his own life experience.

Of course, not every song was a Greek tragedy. He lauded Cyndi Lauper for her personal strength and positivity as a performer before giving a heartwarming rendition of her song, “True Colors.” Towards the end of the evening, he became Charlie Brown again for us, to sing “Happiness” from “You’re a Good Man, Charlie Brown.” By that point in the evening, the innocence and positivity of a theatrical six year old brought a welcome moment of emotional release.

He concluded his show with the stunningly beautiful “Without You” by Jonathan Larson, and the iconic, upbeat “Seasons of Love” from the show that made them both famous, “Rent.”

Much credit for the beautiful musical texture of the evening is due to his multitalented musical director, Daniel Weiss, who bounced effortlessly from piano to guitar and provided lovely, unobtrusive harmony vocals. Peter Schon’s soulful playing of the cello was the perfect emotional complement to them both.

Mr. Rapp’s show was an evening marked by his genuine humility and deep connection to the aching soul in all of us.  It touched everyone as much as it clearly moved Mr. Rapp himself as a performer.