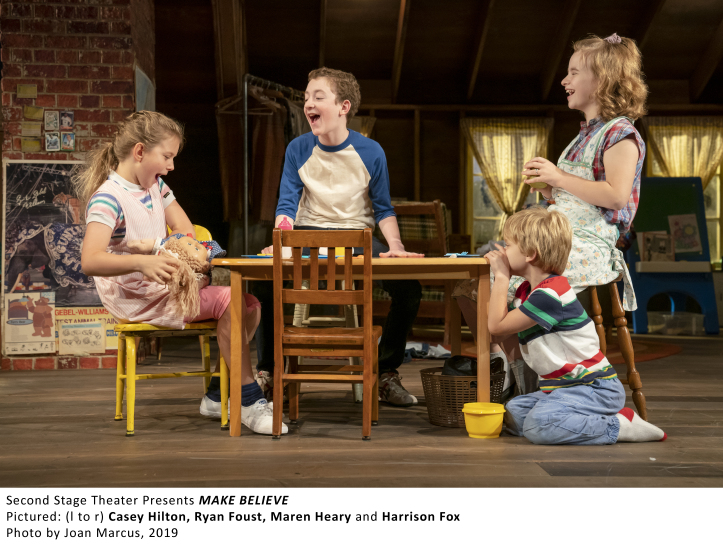 There are numerous funny stories that we all have about our childhood, so they say in Make Believe, the new play by Bess Wohl (Small Mouth Sounds) that is darkening our summer days in the best of all possible ways.  They tell us that we thought we were safe back then, even though most of us rode our bikes down the streets without helmets and survived to tell the tales of our childhood, but through Wohl’s fierce dialogue and formulations, we locate the hard truth as we become better acquainted with the four dynamic Conlee kids, who are aggressively playing house in their airy attic in order to push away the fear that slowly rises up inside them. Their games start to foreshadow a dangerous despair and a rupture that will have them scared and ‘howling at the moon” in hunger while making our own hearts skip a few beats from nervousness.  With director Michael Greif (Broadway’s Dear Evan Hansen) at the helm guiding this spooky ghost story, the realization that these four are on their own for longer than what’s reasonable starts to sink in and make us uncomfortable. Their parents have inexplicably disappeared, leaving them to “rot or get burned” in the uneasy channeling of their elders. The opening is a wildly tension building set-up, one that goes on a bit too long for its own good, but in the adult end, the device works, as the weight is fully implanted for their return thirty-two years later. The Conlees gather, hiding from the Scandinavians and embracing their past selves, searching for answers through the broken down left overs of this not so big happy family and hoping for resolution and relief.

Bess Wohl digs down deep for her return to Second Stage Theater, looking inside the minds and hearts of children, their parents, and the injuries endured in their collective childhood that will haunt them forever. The four young children; young Kate adultly portrayed by Maren Heary, young Chris played with a hard edge by Ryan Foust (2ST’s Mary Page Marlowe), young Addie, delicately played by Casey Hilton, and young Carl doggedly played by Harrison Fox; travel deep into space looking for a way to understand their troubled angry parents while trying to take care of their past presently. Survival tactics unravel deeper cuts that never seem to heal, even when held so secretly under an immature aggressive stance.  The four young actors do a fantastic job mimicking the horridness of adults, while systematically letting us into their pain and fear. It all unravels for longer than need be as they slowly become more difficult to take in and engage with. The writing traps the kids in their own foul mouthed family play, even when as well portrayed as they are.

Finally, the shift happens, and the young and wise Kate transforms into the brittle wise adult Kate, dynamically embodied by Samantha Mathis (Broadway’s 33 Variations). She’s hiding out in that same attic, unintentionally unearthing adult Addie, gorgeously portrayed by the magnificently fun Susannah Flood (Barrow St’s The Effect), acting out some tension and awkwardness with the handsome smart Chris, beautifully played by the subtle Kim Fischer (Third Rail’s Then She Fell). This is where the piece finally finds its beating heart and rhythm, especially when the distracted dog-eared Carl, tensely played with intelligence and unhinged anger by Brad Heberlee (PH’s A Life) arrives determined to be and not be present within the same breath. His disconnection paired beside his delayed powerhouse speech shifts their history and unmasks the pain-filled ghosts floating through the attic air.

Make Believe is dense with wise and weighty dust, forever floating and unsettled in their remembrance of it all. It cuts and bruises our childhood selves with a telling ease, played out with dynamic directness on that beautifully erected set by David Zinn (Broadway’s Choir Boy), with delicately entwined costuming by Emilio Sosa (Public’s Eve’s Song), subtle lighting shifts by Ben Stanton (Broadway’s JUNK), and strong original music and sound design by Bray Poor (Broadway’s True West). The set-up serves the adults well, giving us ample bits of knowledge through deviously delightful pre-recorded audio performances from the likes of Anne Boxley Bowles, Danny Burstein, Heberlee, and Jennifer Laura Thompson. In Fischer’s Chris we find a good heartbeat that we can attach to, but it is Mathis and Flood that rule the attic floor, giving us a vantage point of historical painfulness that resides under the ghostly bruises that have since vanished. I’m not going to try to “wing the ending“, finding a way “to pull it all together” in this last sentence. I’ll just let the childhood dust settle as it may, because it will, most emphatically do just that, on our adult skin and in our soul, making it difficult to forget these kids and the damaged adults they grow up to be. Even when they succeed in a way their parents weren’t able to.