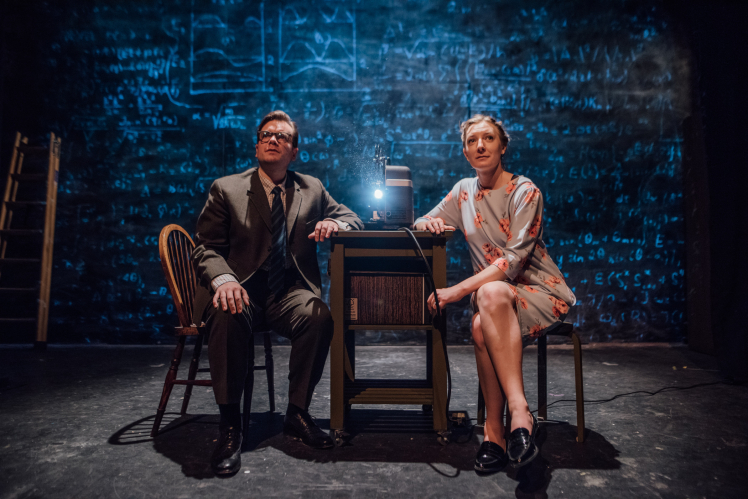 In 1973 there was a groundbreaking series on British television which brought Jacob Bronowski and his brand of popular scientific philosophy to the masses. The show titled, “The Ascent of Man” discussed an idea of linear and optimistic theory.  An assessment of Man’s ability to confront the challenges ahead utilizing past experiences and history to continue a straight-forward rise to the future. It signified a uniform and direct line upward for mankind, and in the New Diorama Theatre‘s epic and fantastically creative co-production with Greenwich Theatre, the Secret Life of Humans tries to unpack the boxes of history that are piled up and around that private room of the now deceased Bronowski. It’s a tomb, library, or boxed testament to his involvement in the mathematical world of estimation and probability, but more importantly for the two archeologists at the center of this explosive play, his intertwined involvement in past transactions are what really sits at the bottom of this pile of papers.

In a gloriously executed production directed by Kate Stanley (Idle Motion’s Voyager) and playwright David Byrne (Down & Out in Paris and London), devised by ‘The Company’, the play by Byrne rolls up its sleeves and digs down deep like explorers as Ana, played solidly and succinctly by Stella Taylor, an anthropology academic at the end of her academic rope meets Bronowski’s lone surviving heir and grandson, Jamie, played adoringly by Andrew Strafford-Baker like a nervous teddy bear, for what is meant to be, at least on her side, a tinder date/one night stand; a bit of fun to take the edge off.  Through an engaging and playful dance of chair movements and subtle body language choreography on a floating chalkboard-like librarian set designed with a perfecting eye for wonder by Jen McGinley, Ana learns about a secret room that has locked away Bronowski’s writings and work from curious eyes like hers until now.  She, in her parallel career in human philosophizing, has always been captivated by Bronowshi’s work, especially after his sudden death just minutes after finishing a BBC network television interview with Michael Parkinson (with well structured video projection work on the back wall). Even though she refers to his world view as derivative and overly simplistic, she sees this random alignment as a chance for understanding, and possible personal/work advancement. After much negotiation and persuasive intrigue, she, with Jamie’s wide-eyed help, opens the door to the room, and begins the job of unpacking this compelling tale, and even when, metaphorically (and projectorially) speaking, the work comes crashing down upon the two, the energy never dwindles, nor does our curiosity.

The question, of course, is what will they find in all those boxes, and what will some of these ‘artifacts’ mean, especially that newspaper photograph of the mourning man.  And how will that effect the sweet Jamie who has worshipped his grandfather all these years? The past, laid out before us in boxes and in the actual ghost-like form of the wonderful Richard Delandy as Jacob Bronowski, his wife Rita, played exquisitely by Olivia Hirst, and Jacob’s friend and co-worker, George, played with achingly beautiful sincerity by Andy McLeod, wander in and out of the library stacks, as the play and the books revolve and slide in and about them.  Secret lives intersect, spanning several different time periods, weaving together like parallel universes colliding and enriching one another.  Almost colliding together in a mad high-minded attempt to resonate out beyond the past into the present and possible future. It’s a marvelous mathematical dance, especially the work of aerial designer, John Maddox, lighting designer Catherine Webb, costume designer Ronnie Dorsey, and composer and sound designer, Yaiza Varona. The theatricality of the telling is as captivating as the story that unfolds.  I can’t say I was able to stay completely in the know, as Byrne asks whether or not our species is capable of learning from our past mistakes, but I definitely was leaning in trying my best to understand the threads of logical thinking. As Yuval Harari’s “Sapiens: A Brief History of Humankind“, an obvious inspiration to this telling, surrounds us from all sides of the moving book shelves with the theories that makes us human, the main one being is our ability to communicate with one another in large groups, as in a lecture hall or a theatre.  At times, we don’t quite know what we are to the actors on stage, an audience or an auditorium of interested students, but we gladly share these vivid imaginations and concepts that this troupe of actors, especially the absolutely magnificent projection work by Zakk Hein, challenging our capacity to invest and dig in. It’s an exploration, most worthy of our time and energy, and one I would happily continue; to read and study more in hopes that I can take in this and all those questions posed within this quick 80 minute piece. It’s a lecture I’d gladly revisit for a second time, hoping to uncover more of the complexities that are hidden in each and every box.