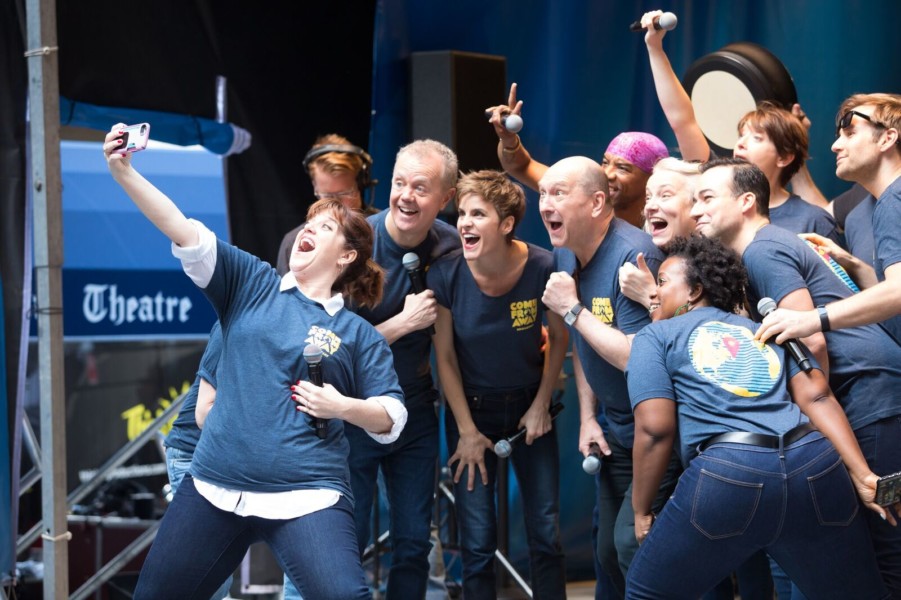 The Broadway League is pleased to announce that this year’s Stars in the Alley will take place on Friday, June 1st at 1:00pm in Broadway’s legendary Shubert Alley, west of Seventh Avenue between 44th & 45th streets.

Stars in the Alley is a free outdoor concert with live music, produced by the Broadway League and sponsored by United Airlines, that celebrates the end of the 2017-2018 Broadway season and adds to the festivities leading up to the 2018 Tony Awards®. The event will consist of performances from this season as well as numbers from current long-running shows.

“Celebrating the end of the season with Stars in the Alley is always one of the highlights of the year! This free concert has something for everyone covering all genres and offering new music, old favorites with a lot more to discover!” said Charlotte St. Martin, President of the Broadway League. “Stars in the Alley is an opportunity to sample the very best of live theatrical entertainment featuring the most talented performers in the city and celebrate the wonderful productions that are now on Broadway.”

“United Airlines is proud to partner with The Broadway League once again for this exciting event. Working with such an iconic fixture of the New York City cultural scene allows us to support our customers and employees who are avid Broadway fans, and we are delighted to share in this year’s festivities,” said Mark Krolick, Vice President of Marketing at United.

“On behalf of the MPTF and Bob Jaffe, Trustee of The Film Funds, we are again pleased to support the actors and musicians who make musical theatre performance the soul of Broadway.  Stars In The Alley is such a joyful celebration, free to the public, in the heart of the theatre district.”  Dan Beck, Trustee, Music Performance Trust Fund.

Once on This Island

The Phantom of the Opera

School of Rock The Musical

WITH ADDITIONAL APPEARANCES FROM*:

Children of a Lesser God

Harry Potter and the Cursed Child, Parts One and Two

The Play That Goes Wrong

More details about Stars in the Alley to be announced soon! For Broadway information in NYC as well as for shows on tour across North America and internationally, visit Broadway.org.

The concert will come just nine days before the American Theatre Wing’s 72nd Annual Tony Awards®. The ceremony will air on the CBS Television Network on Sunday, June 10, 2018 (8:00-11:00 PM, ET/delayed PT) live from Radio City Music Hall in New York City, hosted by 2017 Tony Award Nominee Josh Groban, and 2016 Tony Award Nominee Sara Bareilles. The Tony Awards, which honor theatre professionals for distinguished achievement on Broadway, have been broadcast on CBS since 1978. The Tony Awards are presented by The Broadway League and the American Theatre Wing.  For more information on the Tony Awards, visit TonyAwards.com and Facebook.com/TheTonyAwards and follow @TheTonyAwards on Instagram and Twitter.

The event is produced by The Broadway League. United Airlines is the title sponsor of Stars in the Alley® and is the official airline of The Broadway League and the Tony Awards. Live music sponsored by The Recording Industry’s Music Performance Trust Fund and the Film Funds. The official hospitality partner is Junior’s Restaurant. The official media partner is The New York Times. Additional support is provided by The Shubert Organization and SL Green Reality Corporation.

Suzanna BowlingNovember 26, 2021
Read More
Scroll for more
Tap
Lucky Plush Productions Tab Show – Happy Just To Dance For You
A Bright and Provocative Light Shining in Buckinghamshire Burns Out in the End