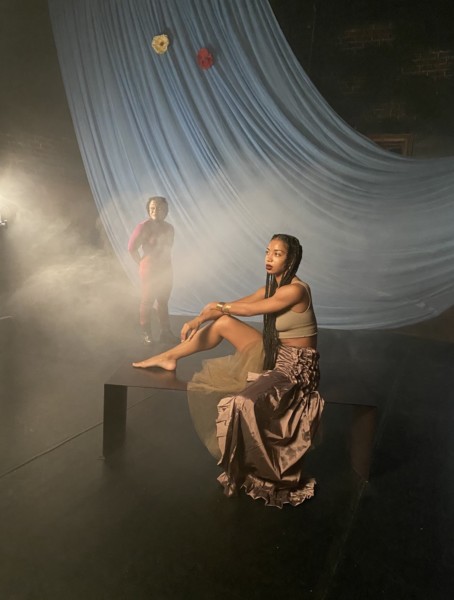 Royal Family Productions is proud to announce the kick-off of their second annual Female+ Forward Festival with See Her, a new cinematic theatrical piece written by one of last year’s FFF playwrights, Iman Schuk (This Open Earth). This event, the first content from Royal Family in 2021, will premiere on MLK Day with a conversation with the creative team and stream through the end of February. It will commemorate this incredible moment in history as a Black woman is inaugurated as America’s next Vice President.  This collaboration recognizes the voice of Black women as an unwavering strength and the drivers of change. The story will be told through spoken word, song, and dance and will be streamed for free on Royal Family’s YouTube channel. The event is FREE. For more information and to sign up to receive a direct link to the event go to www.RoyalFamilyProductions.org.

Kenita Miller-Hicks is a Drama Desk Award-winning actor and vocalist who has performed in such notable Broadway productions as The Color Purple , Xanadu , Tony Award-winning, Grammy-nominated Once on This Island , and Come From Away . Her regional work includes an AUDELCO Award-winning portrayal of Zora Neale Hurston in Urban Stages’ Langston in Harlem and many others. She is also a member of the band The Hawtplates with her husband Justin Hicks and her Sister In law Jade Hicks. Kenita was born and raised in Rochester, NY, and currently lives and works in The Bronx, NY.

Gabrielle Sprauve was born in Queens, NY and raised in Savannah,GA. She trained at Savannah Arts Academy, the Ailey School, the Martha Graham School, and Marymount Manhattan College, graduating in 2017. She has performed works by Larry Keigwin, Alexandra Damiani, Norbert De La Cruz, Paul Taylor, Darrell Grand Moultrie, Adam Barruch, and Jo Strømgren. Gabrielle is a current member of Ballet Hispanico, joining in 2017, where she has had the pleasure of working with choreographers such as Annabelle Lopez Ochoa, Michelle Manzanales, Bennyroyce Royon, Eduardo Vilaro, Andrea Miller, Edwaard Liang, and Gustavo Ramirez Sansano. In addition to her work with Ballet Hispanico, Gabrielle has had the pleasure of freelancing with Traverse City Dance Project to create an original dance film as part of their No Distance Dance Festival 2020 and is a cast member of PARA.MAR Dance Theater.

Iman Schuk is an actress, model and playwright who has appeared in multiple stage and film productions and whose written works have been produced and performed in New York, Atlanta, and Chicago. A student of the human experience, Iman uses her writing to highlight the compelling richness and complexity of everyday people living their everyday lives. She dedicates this work to the honor of her father Sam Smith, who told her to have the courage to follow her own pen wherever it should take her.

Royal Family has been a creative incubator of original, humanistic plays for over a decade. Bravery and fearlessness are imperative to our process. Artists and audiences alike are challenged in a creative safe space to explore the humor and the tangled truths of the human condition. As actor and first-time playwright Anthony Rapp ( Rent , Dazed and Confused , Star Trek: Discovery ) observes, “Royal Family is committed to truthful, heartfelt, alive, theatrical storytelling. It’s vital to the human experience and hard to come by.”

Royal Family was established in 2007 by Katie Avebe, Mary Bernardi, Chris Henry and Andy Theodorou as a home for artists wishing to challenge and transform the traditional theatre canon. Since its launch, Royal Family has developed lasting relationships with highly regarded theatre professionals such as Kathleen Chalfant (Angels in America, Tony-Nominee Wit) and Anthony Rapp (Rent, If/Then, Dazed and Confused); and has partnered with artists including John Cariani (Tony Nominee Fiddler on the Roof, The Band’s Visit, Something Rotten), Adriane Lenox (Tony Winner Doubt, Tony Nominee After Midnight), Mary Testa (Tony Nominee On the Town, Tony Nominee 42nd Street, Tony Nominee Oklahoma), Stephanie J. Block (Tony Winner The Cher Show, Tony Nominee The Mystery of Edwin Drood, Tony Nominee Falsettos), Andréa Burns (In The Heights, On Your Feet), Maddie Corman (Accidentally Brave, Some Kind of Wonderful, Next Fall), Adrienne C. Moore (Orange is the New Black, For Colored Girls…), Constance Shulman (Orange is the New Black, The Rose Tattoo), Penny Fuller (Tony Nominee Applause, Tony Nominee The Dinner Party), and Taye Diggs (Rent, Hedwig and the Angry Inch). Our productions have been reviewed by The New York Times, Time Out, The Village Voice, The Boston Globe, Time Out London, The London Times, and The Irish Times and featured three years in a row in the esteemed Edinburgh Fringe Festival.

Suzanna BowlingMarch 3, 2021
Read More
Scroll for more
Tap
The PATH Fund Awards Over $11,000 To Artists Donations & Applications Being Accepted For Round 5
What to Watch in The New Year: Jan 17