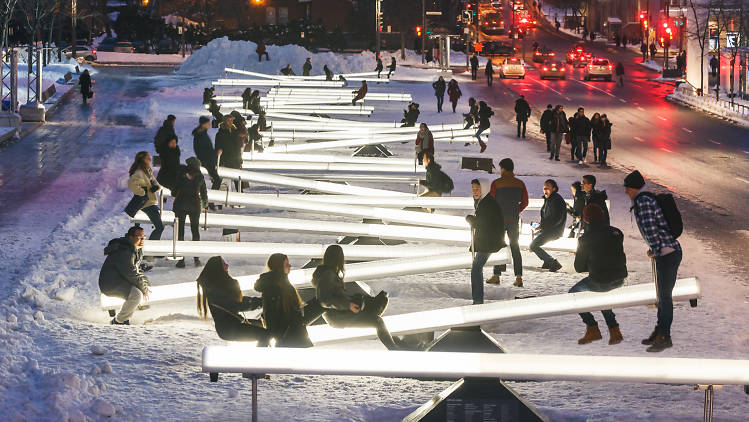 Starting Monday, January 6, an interactive installation will warm hearts of all ages on on Broadway between 37th and 38th streets.

The street will be transformed into a giant playground with 12 illuminated seesaws that passersby can hop on and interact with through the end of the month.

The interactive illuminated see‐saws will respond and transform when put into motion by people. When not in use, the see‐saws will stabilize to the horizontal and remain at a lower glowing level. When activated by users and inclined, the see‐saws, augmented by LED lights and speakers, will increase in light intensity and emit a randomized sound sequence. This variation in intensity aims to animate the public space and its occupants during the cold and dreary winter. Impulse will be an ever‐changing urban composition and urban instrument, in which city dwellers are the musicians and artists.

Created by Lateral Office, CS Design Inc., “Impulse” has been shown around North America, including in Niagara Falls, Boston, Montreal and in other cities. Impulse is a publicly activated light and sound experience. The project uses the idea of repetitive units of subtle light and sound that can be played by the public to create a temporal, ever‐changing event. Impulse embodies ideas of serialism, repetition, and variation to produce zones of intensity and calm.

The bad news is that the street will be blocked through January 31, which may cause traffic woes.

Last year, the Garment District Alliance installed “Iceberg,” a series of metal arches that formed an illuminated and irregular tunnel that made sound as people passed through it.