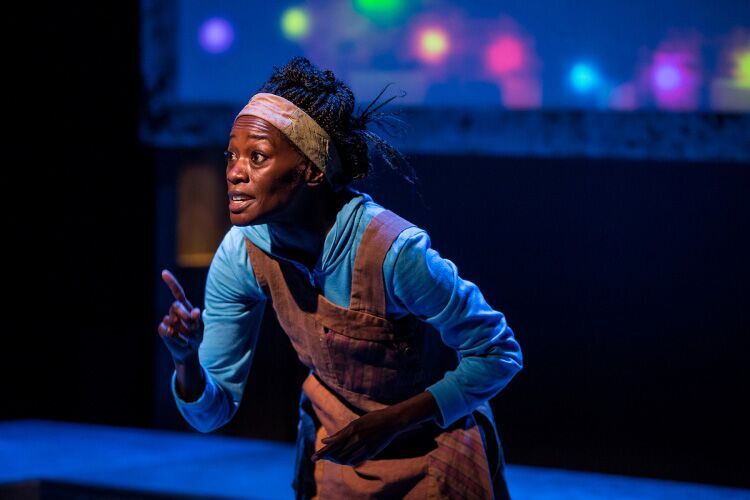 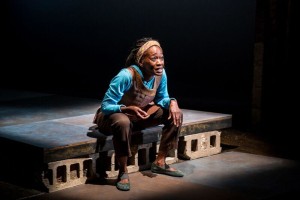 What started as a beloved 1997 children’s novel by Paul Fleischman, has been loving transformed into an inspiring, one woman, tour-de-force showcase. I am, of course, talking about Seed Folks, the Children’s Theatre Company of Minneapolis production which has been brought to run in the Windy City for most of the month of May. Remarkably, the messages of unity within the piece ring just as current and true here. Seed Folks features one woman, noteworthy character actress, Sonja Park, who effortlessly transforms into 14 different characters in the span of about an hour. Initially geared towards children, there is enough richness in its nuanced storytelling to engage the adults in the audience as well. Set in a neglected Cleveland neighborhood, which could easily double for any rundown and unkempt Chicago neighborhood, Seed Folks focuses on the untapped potential inside each of us, if we are just willing to look past our innate biases and stereotypes that have shaped our individual and collective biases. Directed by Peter C. Brosius, all eyes are on Parks the entire time as she masterfully plays a range of ages and genders, from child to senior citizen, with alluring and riveting ease. 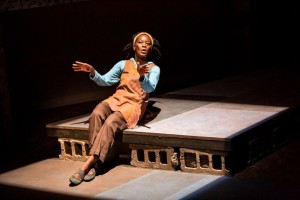 The story begins with Kim, a 9 year old Vietnamese girl, who decides to plant lima bean seeds in the vacant lot near her Gibb Street Cleveland tenement building. While she is digging into the ground with her spoon to plant her seeds, Ana, an 80 year old Romanian woman looks on, suspicious of the activity. Convinced this young person can only be up to no good, Ana goes down to the lot to dig up what she assumes will be a gun, knife or weapon of some sort, hidden by a young gang member. When she realizes she has dug up sprouting seeds, Ana desperately turns to Wendell, the 40 year old former Kentucky farmer building superintendent, to help save the sprouting buds. Next, Leona, a 4th grade teacher, who also takes notice of the sprouting plants and the activity in the abandoned lot, decides to contact City Hall, determined and unwavering by red tape bureaucracy, resolute in her intention to get years worth of garbage and debris removed from this lot to aid the community garden, rapidly taking shape. This immigrant neighborhood quickly embraces the idea, and several others join in the cultivation program too. Ginny, a 6th grader Haitian helps her father plant lettuce with the intention to make money selling the produce for her college tuition. Sae Young, a Korean woman, plants a variety of peppers while she harbors new found friendships with neighbors she long ignored. Curtis plants tomatoes to impress his neighborhood girlfriend whose window looks out over the garden. Amir, an Indian, plants eggplants and carrots in the soil while his consciousness is raised, interacting with people of races he long distrusted.  Uniting the multitude of voices within this inspiring neighborhood transformation, Sam, the 78 year old Jewish man activist, who has seen it all and shares his lifetime of experiences for the betterment of the community. He notices all is not perfect in this neighborhood Garden of Eden. He recognizes “the garden was turning back into Cleveland” with segregated segments, fenced in soil plots, each culture purposely selecting its own, self-contained section of the lot. To counter this, he sponsors a contest between all the gardeners in the vicinity for the best ideas to collect water to sustain the garden. Nothing unites divided cultures like the chase of the almighty dollar. 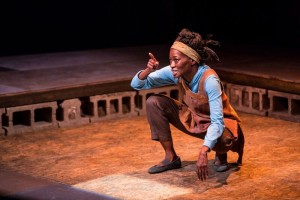 The final character in the piece is also the most poignant. Florence, an older woman with family that originated in Louisiana before she migrated to Ohio, is the character who defines the very title, Seed Folks. These “Seed Folks” are people who decided to plant their roots wherever they may happen to take up residency. She concludes her monologue professing the importance of renewed community hope for all and how everyone in the neighborhood “feels a part of the garden…..like family.” By unleashing the hidden potential within themselves and their neighborhood, these Clevelanders morphed a dilapidated piece of land into a community garden, embracing all the individuality of the immigrant neighbors in the hood, so to speak. This remarkable lesson in social transformation is invaluable, regardless of audience member’s age. 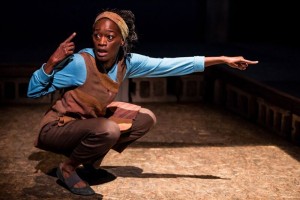 While thematically the repurposing of the vacant lot becomes a symbol of family & communal hope renewal housed in a once deemed dangerous spot, the real beacon in Seed Folks is the remarkably talented Sonja Park. Her unprecedented obligation to fulfilling each of the distinctive 14 different characters she gives voices was just remarkable. I couldn’t take my eyes off of her. This character actress didn’t rely on superficial external costume changes to bring to life these diverse characters. It was all  masterfully crafted from within. Her rapid-fire commitment to ever-changing dialects and posture was simply astonishing to behold. During the show, Park also came into the audience and engaged a few of the children in attendance, much to their delight and bewilderment.

Continuing its long tradition of evocative and affecting storytelling, Seed Folks fits perfectly in the wheelhouse of Chicago Children’s Theatre productions. Focusing on year-round quality children’s programming, the Chicago Children’s Theatre has served over 325,000 theatergoers locally and worked with students and schools from all 50 wards in the city of Chicago. Folding perfectly in the mix, Folks’ inclusive tale of team work from people who otherwise would have never engaged one another impressed.  Merging the parallel worlds of neighbors in an every day urban society setting, chucking their predetermined biases to join together, working for the common good, may be viewing the world through rose colored glasses, but I must say, that is my favorite view shade. The journey that is Seed Folks is one well worth investing in seeing. Let your curiosity sprout as Sonja Park blooms.

Chicago Children’s Theatre’s Seed Folks is now playing through May 22, 2016 at the Ruth Page Center for the Arts