Seeing the Light, Soulpepper’s Jesus Hopped the ‘A’ Train Sizzles Strongly in the Complicated Sun 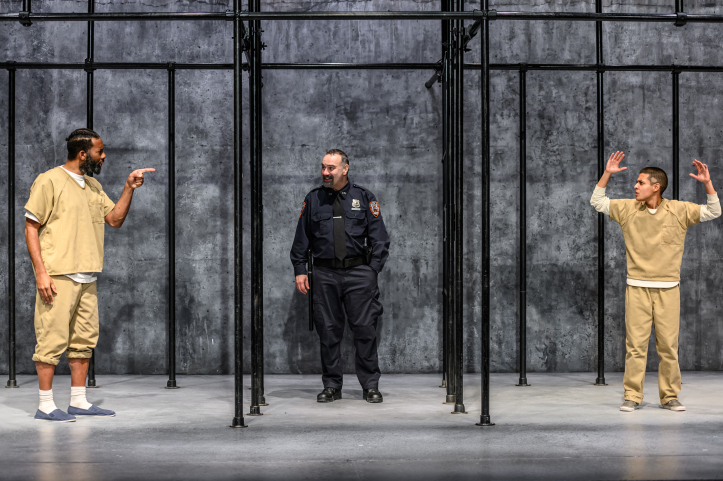 Seeing the Light, Soulpepper’s Jesus Hopped the ‘A’ Train Sizzles Strongly in the Complicated Sun

With a bone rattling clang, Soulpepper‘s staging of Stephen Adly Guirgis’s intensely compelling and fascinating play, Jesus Hopped the ‘A’ Train stomps forward taking possession of the space with determination and confidence. “This is not the VIP room, but livestock storage“, we are told by the disturbingly sharp and brutal prison guard, Valdez, played menacingly by the excellent Tony Nappo (Tarragon’s The Golden Dragon) but the production shines as professional and bright as the hard metallic poles that make up the confined cells on the stage. The set, well designed by Ken MacKenzie (Soulpepper’s Spoon River), with pitch perfect lighting by Kevin Lamotte (Soulpepper’s Waiting for Godot) and solid costuming by Shannon Lea Doyle (Tarragon’s The Jungle), gives off the sense immediately upon entering that everyone in the well-crafted Jesus Hopped the ‘A’ Train is a caged creature one way or another. Separated from the outside world, the two cells that are planted like animal cages center stage sit strong and determined, while also being enclosed inside another confined space. The rest of world sits just out of reach, somewhere on the other side of that one side door, or unseen behind us, offering little to no access or escape. The sound design by John Gzowski (Soulpepper’s The Crucible) startles and encloses us from the first moment shocking us with its harshness and sharp emptiness. And then, we are given that first dynamic visual; a young man on his knees, desperately trying to find salvation in the spoken word, and being ridiculed for his clumsy failure. It’s an impressive combined slap that effectively entraps us tensely in captivity. It forces us to lean forward and peer down the dark tracks, tensely looking for the light that signals that the train we want is arriving fast and furiously.

It’s obvious from the get-go that no amount of praying by Angel Cruz, powerfully portrayed by Xavier Lopez (Blood Pact’s No Clowns Allowed), will ever release him from this or any kind of jail he finds himself trapped inside, even one of his own making. It’s clear that God and salvation/forgiveness will be playing a strong, but supportive role in this detailed exploration. The same could be said for the other inmate Lucius Jenkins, played wildly and strongly by Daren A. Herbert (Stratford’s The Music Man). His violent offense is much more grand in scale (X8) than the act done by the outspoken but scared Jesus, but Lucius speaks of God, and directly to God about salvation and forgiveness that teeters somewhere between profound and insane. His antics, when I first saw the play at the Signature Theatre in New York a few years back, wore me out, and I started to melt his words into a sound that could be ignored or discharged, but here, in Soulpepper’s Michael Young Theatre, each word and phrase strikes hard with the complicated intersections of belief, faith, denial, and dementia. The two fine actors spar defiantly and intimately while separated by bars, and in that fire, we find the fuel of this production, taking us to the edge of conflict and beyond.

Jesus has our compassion from the very beginning, even as he jabs and dodges with spitfire and pho-arrogance at the attorney assigned to his case. Played strongly by a confident Diana Donnelly (Shaw Festival’s Sex), Mary Jane Hanrahan withstands the onslaught with power and compassion, even as they rage against one another in their first meeting. Donnelly’s argument and defense is solid and detailed finding shades of another color not found elsewhere in her portrayal. She inhales the prison energy with passive intensity, shifting solidly in her shoes away from the high decibel interactions of this train ride to a structured solid place of complicit conflict. “Angel got to me” she says, as we acknowledge the same, even as we hear more about his crime (or maybe because of it). We join forces with her, for him, and when she acknowledges she made “two mistakes“, we know the road to Angel’s ruin has just been paved, but tense with an anticipatory edge.

The first guard we see interacting with Lucius is the kindly Charlie, played by a centered and warm Gregory Prest (Soulpepper’s Of Human Bondage), who treats his prisoner with respect as he works up on the rooftop of a special 24- hour lockdown wing on Rikers Island. His empathetic treatment of the prisoner fills us with empathetic care, and although he is punished for his kindness, he ultimately has an odd and profound twist, granting the guard a release from being the self-inflicted imprisonment inside those solid walls. His replacement, on the other hand is the brutal Valdez gladly taking over a jail cell of his own making. His has created walls made up of anger, hatred, and bitter antagonism. It surges out so distinctly that we become as bruised by his behavior as any of the prisoners inside.

His energy echoes the universal reaction of how many view these inmates, as if they are wild beasts that need to be caged, but it’s also a headspace that rattles the theatre’s senses, back and forth, accentuated by both Lucius’s desperate mania and Valdez’s fear-based aggressiveness.

It’s hard to pin down how we feel about Lucius and the system in general. The sympathy we feel for his predicament is as erratic as his behavior. The violence that has imprisoned him behind these very bars is disturbing and very deadly, but what about redemption? Who are we to take his life for the crimes he did on to others? Is crime and punishment balanced with empathy and understanding of mental illness and traumatic abuse? Do we ignore the childhood abuse done unto Lucius or do we seek to give him care and treatment for his trauma? More importantly, do we turn a blind eye to this violent offender, especially if he or she is of color, believing that we, as a community, might be a tad safer without him walking the streets? The answers are your own to make, but religion throws an additional layer on the social conundrum that makes it even more complicated for us to see the path clearly. And then there is Jesus, the inmate, not the Son of God. How will he be able to see his way clear to the end if we can’t come to any conclusions as we sit comfortably on the outside looking in?

It’s a testament to the strength of a play, as written, when it registers as strongly and complicatedly as it does here at Soulpepper. This express train ride of a play, directed with a quick sharp hand by Soulpepper’s Artistic Director Weyni Mengesha (Soulpepper’s Kim’s Convenience), has no delays on the tracks. It drives full speed to the end of its line filling us with a complicated engagement that is twisted by violence and personal choices. We know in the final moments, the cruelty of Lucius messing with the mind of the young Jesus, but we can’t completely deny the honesty with which it is being said. In both directions. The high-octane passion of the piece takes over, leaving us without a lot of space for complacency. Jesus Hopped the ‘A’ Train is a powerful piece of writing about punishment, redemption, forgiveness, and prejudice wrapped up in God’s and societal judgement. But it’s in the variations of theme, speed, and color that keep us on the edge. Not a good place to be on our daily TCC or MTA train commute, but perfectly captivating for a night at the theatre.