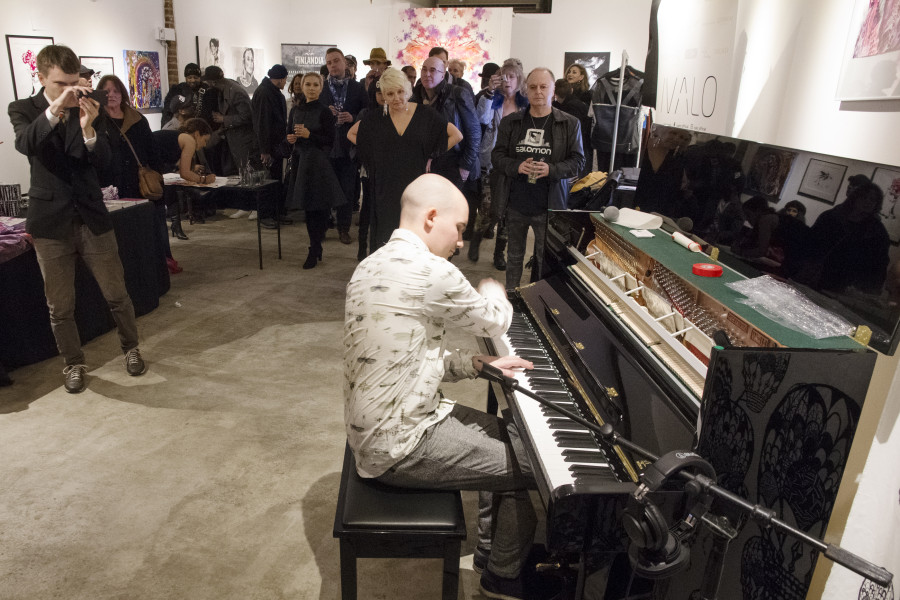 It’s been a busy month in New York City.

Culture For One, an organization dedicated to improving the outcomes for the city’s youth in the foster care system through the arts, hosted a reception to celebrate established supporters and introduce new members of the community to the important work of the organization.

Finnish Tech, Design and Art, a non-profit organization that promotes Finnish creativity in the US through artistic expression, debuted The House of Finland this month in New York City. The pop-up featured interactive sessions, multi-content exhibitions, concerts and evening events with the creatives who brought the works of art to life. The evening festivities will include concerts and cocktail parties with Finlandia Vodka and Finlandia Cheese. The House of Finland is a unique immersive experience celebrating Finnish art, heritage and culture.

Produced by creative collective and agency, Black Swan Projekt, the festival highlighted an array of dynamic, up-and-coming creatives, including a debut single release gig by avant-garde pop act GEA, live painting and latest collection by illustrator and textile designerSusanna Sivonen, selected designs from a newly launched art and fashion brand CHAÎNE and The Routes of Helsinki sound installation by Mikko H Haapoja. The Routes of Helsinki installations have been actively presented in many galleries, Helsinki Music Centre and in public city space, including metro platforms of Helsinki Central Railway station. Currently sound art piece The Routes of Helsinki – Beeline can be heard in Helsinki City Museum’s main exhibition Helsinki Bites.

Nicole Opper’s new film Visitor’s Day made its New York premiere at the DOC NYC International Documentary Film Festival at the IFC Center on  November 14th.  Visitor’s Day tells the story of Juan Carlos, a runaway who struggles for self-acceptance in the face of abandonment by his father. This powerful documentary is set at IPODERAC, a self-sustainable group home for boys – housing up to 72 children – in the countryside of Mexico founded in 1966. In the year of its 50th anniversary, IPODERAC will break ground creating the first home of it’s kind for girls and young women.

One of our favorites, ATOBOY, the modern Korean restaurant from Chef JP Park has launched lunch service. The a la carte menu features a selection of rice bowls, hansang (Korean lunch set), noodle soup (limited number per day), as well as small dishes (featuring new dishes and favorites from the dinner menu). Daily selections of kimchi and jangajji will also be available.

Chef Flynn McGarry of Eureka (with his current chef residency at Kava) introduced a Champagne & Oysters menu in the evening during dinner service. The menu will feature East Coast oysters and champagne selections by the glass and bottle. Menu is attached here. Additionally, he will be serving a limited number of “Pocket Squares,” his rendition of his favorite Hot Pockets snack. The fillings will change regularly but he will begin with Chicken & Truffle (confit chicken with celery root, truffle and sottocenere), then Squash & Sage (roasted squash with sage, gruyere).

And, for the holidays coming up. November is National Vegan Month and by CHLOE. is celebrating all month long with delicious seasonal items and specials at both NYC and LA locations.

Diners turkey-trotting their way to the vegan hot-spot can enjoy the seasonal Gobble Gobble Burger ($10.95) made with a lemon-caper seitan burger, topped with sautéed kale, harvest stuffing, rosemary gravy, and a fresh cranberry sauce – all sandwich between a potato bun. Additionally, by CHLOE.’s newest standalone bakery in NYC’s West Village, Sweets by CHLOE., is offering freshly baked vegan pies and desserts that are perfect for the holiday season.

HallMarc, located on the third floor of the iconic Time Warner Center and designed by The Rockwell Group with an eye towards maximizing the panoramic views of Columbus Circle and Central Park, is the perfect place for watching the parade balloons go by on Thanksgiving Day.

This holiday season, seeing is believing as Macy’s Herald Square The legendary Christmas windows are here. Signaling the start of the most wonderful time of year, this year’s windows titled “Believe,” not only celebrate the spirit of the season, but also salute nine years of Macy’s “Believe” campaign—a cherished letter writing campaign which raises funds for Make-A-Wish®, the national organization that grants the wishes of children with life-threatening medical conditions. Sure to delight generations of spectators who have grown up with the annual tradition of visiting the windows, as well as those experiencing the enchantment of a New York City Christmas for the first time, this year’s seasonal spectacular provides a distinctive window into the unique spirit of the holiday season in each of the six Broadway windows.

Created by Roya Sullivan, award-winning designer and Macy’s National Director of Window Presentation, Macy’s 2016 Christmas windows combine the wonder of modern technology with stunning visual elements and an extra dose of holiday nostalgia as they bring six key holiday themes to life. Each window is accentuated with an intricate handmade frame indicating the theme of the artistry that lies within. In addition, a fifteen foot tall representation of Santa Claus will take center stage, perched high above the marquee entrance presiding over the festive activity in Broadway Plaza below.

According to Sullivan, “In creating this year’s windows we wanted to focus on the idea of what Christmas meant to us as children. In thinking back to those feelings we kept returning to the idea of six key qualities that truly exemplify the spirit and magic of the season. To build upon that, through the years we have noticed how much kids of all ages enjoy interacting with the windows so we have again incorporated interactive elements with the goal of continuing to creating experiences that allow our audience to play and be part of the action.”

Here is to a wonderful November.