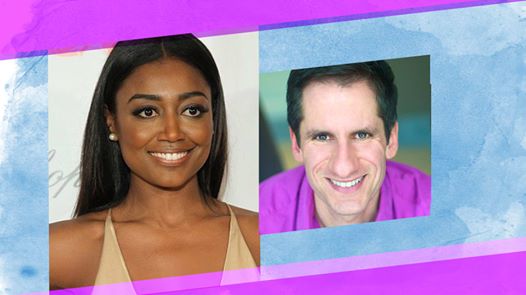 The Town Hall & Mark Cortale continue with their latest installment of the internationally acclaimed concert series Seth Rudetsky’s Broadway at The Town Hall, 123 W. 43rd Street. Rudetsky’s guest this month was Tony Award winner Patina Miller, who won the coveted statue for her performance as the Leading Player in the 2013 revival of Pippin. Miller offered. Miller started off the night with a wonderfully arranged version of “Corner of the Sky”, having always wanting to sing this song. Rudetsky got her to sing “Maybe this Time,” from Cabaret, a show she hasn’t done, but he thinks she would be right for.

Faux pas almost happened when Patina dressed in a micro mini sat down in the rather the low to the ground chairs. Thankfully, Patina’s manager had a scarf, which saved the day.

Miller also co-stars in the CBS series “Madam Secretary.” The format of each concert is a seamless mix of intimate behind-the-scenes stories prompted by Rudetsky’s funny, insightful and revealing questions. Miller was originally hired as the understudy for Sister Act in the reading. She was just out of college. As she launch into “Fabulous, Baby!” from that show, the sensational Miller’s vocally soared. After doing the reading, Miller was cast in Hair in Central Park, she almost missed out on moving to Broadway or Sister Act to London as the two conflicted. But as luck would have it London happened and then Broadway happened twice. She went on for one performance at a 10am student matinee and the rest is history.

“Miss Celie’s Blues” showed off Miller’s soulful side as we learned she was auditioned for Effie White for the film version of Dreamgirls.

“Last Midnight” from Into the Woods gave us a look at what it was like to see Miller performed the Witch in the three-night Hollywood Bowl production, which played in LA this past summer. there are rumors this show will be returning to Broadway.

Rudetsky, as always brought the most out of his guest and this was one delightful evening.

Delightfully these one-of-a-kind concerts are done for SandyHookPromise.org, which funds programs and practices that protect children from gun violence.