Seven Deadly Sins a New Take on Falling From Grace 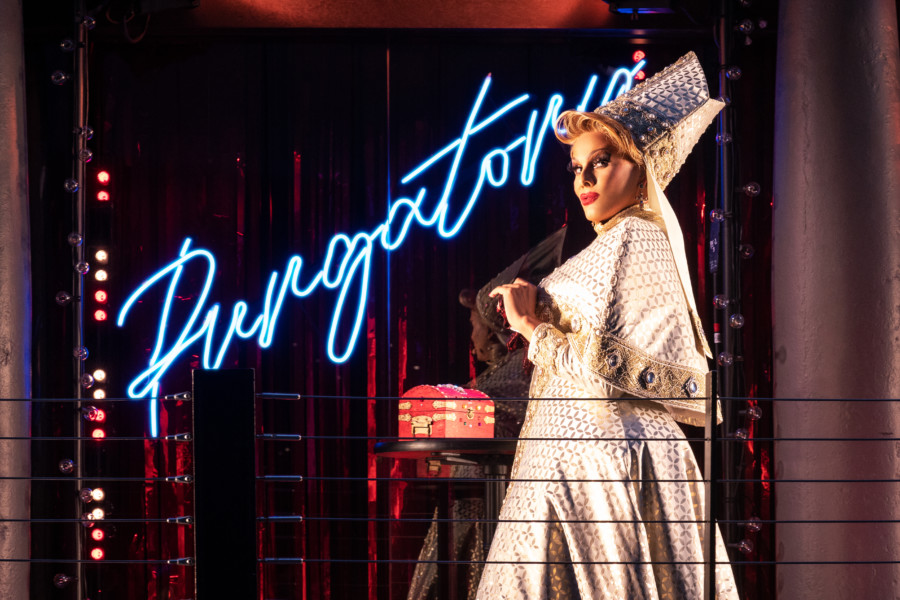 Seven Deadly Sins a New Take on Falling From Grace

Theatergoers head to the meatpacking district to purge your sins or relish in them. There you will catch The Tectonic Theater Project and Madison Wells Live production of Seven Deadly Sins. Under the direction of Moisés Kaufman, seven new plays inspired by one of the Deadly Sins will titulate, seduce and make you think, as you are throughly entertained.

Starting off in Purgatory, Shuga Cain (S11 of “Ru Paul’s Drag Race”) dressed as a fashionista white pope sings the New Orleans blues as she strip teases to “I Feel a Sin Coming On”. She thrills to “I’ll Be The Only One To Blame and You Can See It”.

You are then split into 3 groups and you are off to visit the sins. First up for my group was Wild Pride by MJ Kaufman Here Pride is gay pride, as influencer Cody Sloan as Guru is selling and claiming to help those in need. Bianca Norwood making her New York stage debut plays all the callers and those who call him out. This fabulous take on how influencers give false hope and are only out for themselves, says so much on this subject. Bravo! a perfect start to the night and Ms. Norwood is an acting find.

Onto the next window Shavanna Calder (HBO’s “Los Espookys”)as Eve is being seduced by Morgan McGhee (Ain’t Too Proud) snake in Ngozi Anyanwu (Gluttony) in Tell Me Everything. Here, Eve has the self control to resist the temptation of the Apple, but the snake’s persistence of knowledge makes her gluttonous for more. As in Pandora’s box once the knowledge is gained, Eve is mournful and regretful of the gift.

The last play in this section was Thomas Bradshaw (Sloth) Hard. Brandon J. Ellis (Bandstand) would rather play video games than make love to his wife Shamika Cotton (HBO’s “The Wire”). What a man needs to get motivated comes into play.

Walking a couple of blocks away our fabulous guide Tennille tells us about the sexual exploits of the area.

Jeffrey LaHoste (Envy) is the only show not inside of a glass enclosed window. Set in another century Naples has Andrew Keenan-Bolger (Newsies) showing off his fabulous bod as Caitlin O’Connell (The Crucible) drives her husband’s gay lover out of town.

Nationally ranked pole dancer and movement artist Donna Carnow brings Bess Wohl’s Lust and Cynthia Nixon’s words into an exquisite take over a victims blood lust to kill her abuser. Ms. Carnow who has never acted before brought such feeling to the emotions, insecurities and life of a stripper with a child to support.

Ming Peiffer’s (Wrath) is the only play I could not connect to. Longhorn is set in a S&M dungeon where Brad Fleischer (LCT’s Golden Boy) “M” has contacted Kahyun Kim “W” (STARZ’s “American Gods”) an Asian American professional dominatrix. “W” has been unleashing her services on a white American men, humiliating and dehumanizing them. The man is portrayed like a Republican male. After the session he unleashes violence, as “W” loses control. In a world where Asian Hate is rearing its ugly head, this play seems inappropriate. Sadly who is harming Asian American’s are for the most part not white males. This is a subject near and dear to my heart, as a lot of my best friends are Asian.

My final entree was the delightful Moisés Kaufman play based on Greed… Watch. Eric Ulloa (On Your Feet) Leo and Tricia Alexandro (Perp at the Barrow Group) Vivian’s, father has passed away. After the memorial the father’s will, will be read, however Leo is concerned about his father being buried in a watch worth over a million. Here greed shows it’s hysterical face. Ms. Alexandro dominates this well done and fabulous ending to the evening.

Well directed, well acted and a delightful evening of original plays conceived by Michel Hausmann, designed by ‍David Rockwell, lit by Yuki Nakase Link and phenomenally given a sound designed by Tyler Kieffer. This was one of the best scores I have heard. I would seriously by this CD.

These sexy, adventurous outdoor theatrical experience, are all broken down by color-coded wristbands, which divide the audience into small groups. Each one has a guide who remains throughout the evening, distributing complimentary earbuds, explaining how to connect to the wireless receiver, holding up a QR code theatergoers can scan for a virtual program.

Theatre is back with a bang and this is one hell of a firecracker.

Stephen SorokoffAugust 12, 2022
Read More
Scroll for more
Tap
Meet Michael Mott Composer of In The Light, A Faustian Tale
What to Watch: July 1