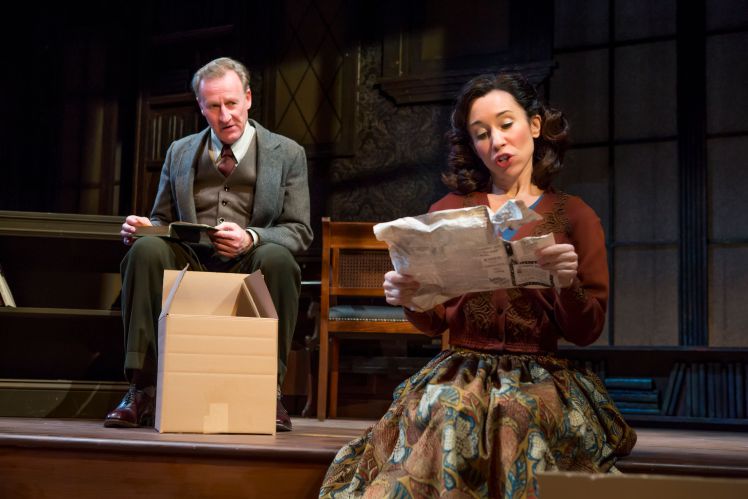 Shadowlands: A Beautifully Stuffy Lecture on Love and Suffering.

Shadowlands: A Beautifully Stuffy Lecture on Love and Suffering. 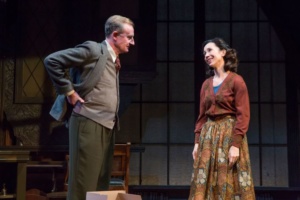 As a modern play, I would bet that Shadowlands was considered quite a pleasant and harmless drama back in the day when it first debuted as a television film in 1985. Nothing all that challenging or disturbing, and I’m certain that it was viewed as a well crafted piece of storytelling when it made its stage debut at the Queen’s Theatre in London on 23rd of October, 1989, running for almost a year.  The play, that won an Evening Standard Award for Best Play 1990 and a Tony award in 1991 for Best Actor (Nigel Hawthorne), centered around the real life story of  an acclaimed British writer and his relationship with an American fan, whom he befriends and eventually marries. I do recall seeing the 1993 film, directed by Richard Attenborough starring Anthony Hopkins and Debra Winger (Oscar nominated), but beyond the pretty spot on casting, that’s about all I am able to remember. I knew it had something to do with the struggle with personal pain and grief that comes from a love relationship, but beyond that, I could only recall that it felt quite proper and charming, like a Merchant/Ivory film without the beautiful vistas. 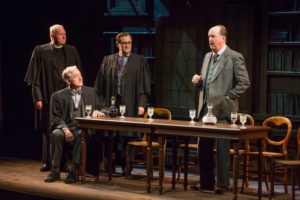 The current production of William Nicholson’s well crafted play, as directed by Christa Scott-Reed (New World’s Church and State) champions the same solid qualities unabashingly. Brought to Theatre Row’s Acorn stage by the Fellowship for Performing Arts, this play tells the sweet and sad story of C. S. Lewis, (or Jack as his friends prefer to call him) portrayed exceedingly well by Daniel Gerroll (Broadway’s Plenty). We find him sitting comfortably in middle age, happily living the life of a quiet bachelor in Oxford, sharing a home with his loyal and steadfast brother, Major Warnie Lewis (John C. Vennema). He is perfectly content writing and lecturing his life away, until the day, when an American woman interjects herself into the conversation, and all else is in the history books.

Regardless, their intellectual bond and mutual affection grow, slowly and steadily, taking Jack by surprise, right up to the end. She upends his intellectual constructs and fuels his emotional evolution. And only later, when he finds out what love and suffering truly mean, outside of a lecture, Jack is quite the changed man, at least emotionally. He may still be the stuffy British man who shies away from the sun, but he also forgoes self-preservation, forcing himself to rethink love, pain, and faith.
Joy is a breath of sharp fall air in the slightly dusty British halls of Jack’s existence. She is pushy and straightforward and manages to hold onto that part of her persona to the sad and bitter end. I didn’t quite believe in Joy’s pain or her infirmity near the end, but it also didn’t make her less likable. Davidman delivers on the required strength and passion that could melt the ice that surrounds Jack’s heart, and we understand how she is able to help make him a better man. I just wish we also saw some of her own weakness and struggle to a larger extent.
On a very solid and somewhat overly fussy and noisy set, designed by Kelly James Tighe (Cherry Lane’s Nunsense), with lighting by Aaron Spivey (La Mama’s Jukebox Jackie), superbly stuffy period costuming by Michael Bevind (FOA’s The Screwtape Letters), and original music and sound design by John Gromada (Broadway’s The Trip to Bountiful), the historically balanced drama marches forward, sometimes a bit too slowly and properly, but all with very good taste indeed. The cast all do a fantastic stiff-upper-lipped job, especially Vennema (Broadway’s The Royal Family) as Jack’s solid and kind brother. His genuine empathetic soul is on full display throughout, but becomes more pronounced with his hand-holding of Joy’s young son, played sweetly and naturally by Jack McCarthy/Jacob Morrell.
It’s a heart warming moment in a heart warming play about the bravery of stepping into the arena of Love. Knowing full well that pain and suffering comes on the backside. Earlier on, Jack perches that one should endure suffering with patience, but his ideals no longer applied once Joy entered the picture. Jack dives in to the pool of Love and Pain, gracefully and quite properly, like any good solid Brit would do. And we applaud that brave step forward.
For more go to frontmezzjunkies.com
Related ItemsC. S. LewisDaniel GerrollFellowship for Performing ArtsJoy DavidmanNewRossshadowlandsTheatre Rowwilliam nicholson
Off Broadway

Suzanna BowlingAugust 4, 2020
Read More
Scroll for more
Tap
Daryl Roth and Linda Winer In Conversation Part 4
Billy and The Killers To Rock and Not Enough Roll