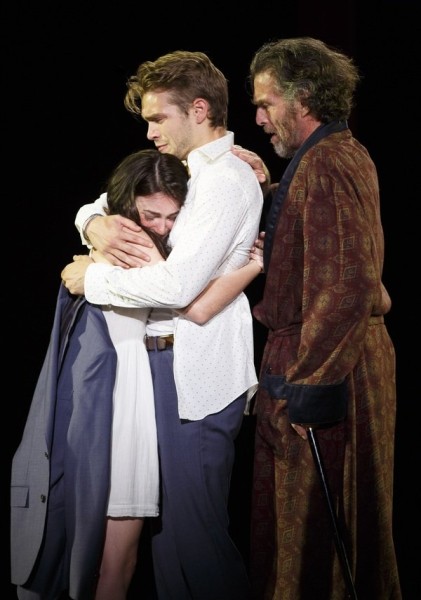 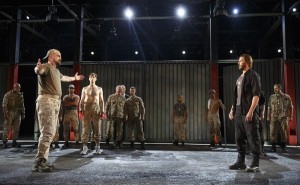 Watching Shakespeare in the Park’s Troilus and Cressida was like watching rats deserting a sinking ship and being trapped to suffer. Daniel Sullivan’s modern up take makes Shakespeare sound so talkie with bits of shell shock or loud obnoxious music to beak the lull. Before the second act, a third of the audience left and it wasn’t even raining. By the beginning of the second act half a theatre was barely filled. In an age where war rages on Sullivan’s let’s us see the seven-year war close up. Soldiers roam the stage, the aisles as Mark Menard’s sound design blasting explosions complete with gun fire never ceases as the soldiers take selfies.

I love Greek and Trojan stories of old and did not know the story of Troilus and Cressida. This anti-romance involves Troilus of Troy (Andrew Burlap), who falls for Cressida (Ismenia Mendes), daughter of a Trojan priest. Cressida rivals Helen of Troy (Tala Ashe), the cause of the war and spends the show in a alcoholic stupor. Panders (The wickedly fabulous) John Glover is, Cressida’s uncle and the matchmaker, between the two. The two bed, profess love before Cressida is exchanged by her father Priam (Miguel Perez) for a Trojan prisoner of war. Troilus glimpses Diomedes (Zach Appelma), a handsome Greek soldier with his beloved Cressida, and decides to avenge her. 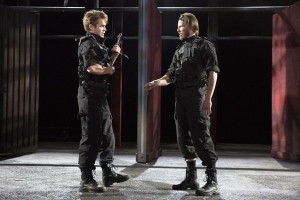 The majority of the play revolves around the leaders of the Greek and Trojan forces, On the Greek side Agamemnon (John Douglas Thompson) and on the side of Troy, Priam. Agamemnon and his cohorts attempt to get the proud Achilles (Louis Cancelmi), to return to battle and face Hector (The scene stealing Bill Heck), who sends the Greeks a letter telling them of his willingness to engage in one-on-one combat with a Greek soldier.  Ajax (Alex Breaux) who was originally chosen makes peace with Hector before they are able to fight. Achilles is aided into was by Ulysses (Corey Stoll) and then prompted to return to battle after his  lover Patroclus Ajax (Alex Breaux), is killed by Hector before the Trojan walls. More fighting until Achilles catches Hector and has him killed as war rages on.

Only Thersites (Max Casella) offers comic relief and it is too little to late.

Troilus and Cressida: Shakespeare in the Park until Aug. 14th.