Shakespeare in the Park’s Much Ado About Nothing is Pretty Much Everything. 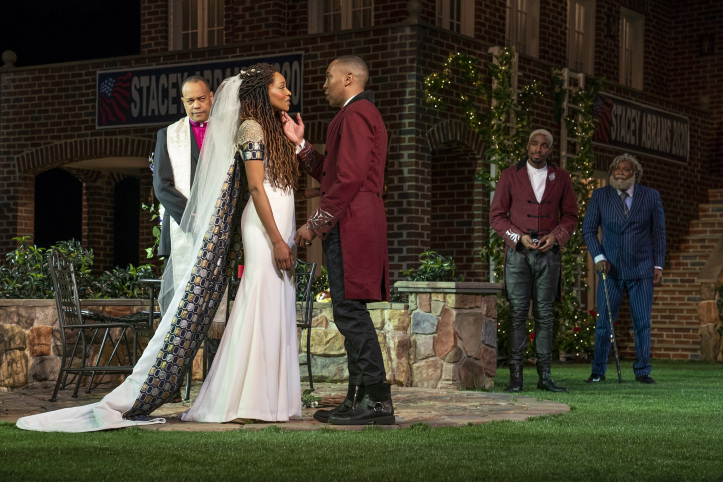 Shakespeare in the Park’s Much Ado About Nothing is Pretty Much Everything.

Thank you to Joseph Papp and the Public Theater for the vision of doing this year after year. It is a truly amazing gift to the city of New York from the Public (and its generous sponsors); free-to-all Shakespeare in Central Park at the gorgeous Delacorte Theater with an ever and constantly astounding array of talent and celebrity.  This year’s Much Ado About Nothing, as directed with skill and sass by the phenomenally gifted Kenny Leon (Broadway’s American Son) and glorious choreography by the talented Camille A. Brown (Broadway’s Choir Boy), finds a playing field of originality and festivity within Shakespeare’s sacred text. Fortunately, I was able to slip in, thanks to the Public’s press department, just in the nick of time, and blessed with the chance to see the second to last performance of this magnificently fun recreation, one that, happily, was being filmed the same night for broadcast on PBS (Thank the Gods for that divine bit of love and theatricality).

For the night’s theatrical gift, I will forever be truly thankful for, as this production plays and flies through the text with ease and joy, lead by the strong and gifted Danielle Brooks (Broadway’s The Color Purple) as feisty Beatrice falling for and fighting with the handsome and ridiculously charming Grantham Coleman (Public’s Buzzer) as her wise-ass equal in love and sting, Benedick.  Every word and phrase flowing from their lips read authentically and clear, finding honest humor and charge in every moment. It’s smart and strong, especially when smacked upside with the unfairness of a women’s value and worth being seen as so fragile and easily broken solely based on the dastardly words of a scoundrel and trickster.

On a lovely summer’s night in New York City, with a cool breeze and a starry sky, there is pretty much no better way to spend an eve then at the Delacorte. I’m sorry to say the chance to see this wonderfully crafted reinvention of one of Shakespeare’s finest has passed (it closed last night), but the next is coming soon. So pay attention, you New Yorkers, get yourself to the park and see the upcoming Coriolanus revving up it’s bloody engines next month. The tickets are free and they are pretty easy to get (the noon lottery at the Public is my recommendation), so make sure take advantage of this gift, and get thee to some Shakespeare in the Park.

MUCH ADO ABOUT NOTHING