Shakespeare’s Twelfth Night, at the Delacorte Theater in Central Park, is not your typical version. This musicalized version by Shaina Taub, adapted by Kwame Kwei-Armah, who co-directs with Oskar Eustis, is throughly entertaining. The score sounds like Stevie Wonder meets the band Chicago. The songs are the highlight of this production with funky beats, hummable melodies and bouncy lyrics by Ms. Taub who also doubles as The Fool, Feste is quite a talent.

Before the show starts you are invited on stage for free popcorn (limited supply), performers, jugglers, selfies and mingle with the inhabitants of Illyria. Already they are telling you to enjoy. 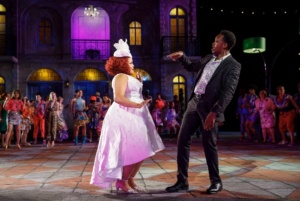 This  gender-crossed, mistaken-identity comedy has been set in New Orleans for a funeral and 90-minutes of interaction. I have to admit if I did not know this play so well, I may not have gotten the gist, as everything is played fast and lose. 17th-century verse is tossed out so that contemporary lyrics can take it’s place. Basically this is a musical re-telling. 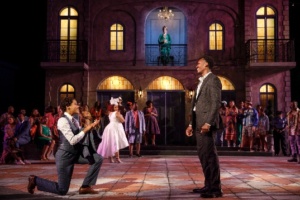 The play centres on the twins Viola ( Nikki M. James) and Sebastian (Troy Anthony), who are separated in a shipwreck. Viola, disguises herself as a male named Cesario. She falls for Duke Orsino (Ato Blankson-Wood), who is in love with the Countess Olivia (Nanya-Akuki Goodrich). Upon meeting Viola, Countess Olivia falls in love with her thinking she is a man. In the meantime Sir Toby Belch (Shuler Hensley), Sir Andrew (Daniel Hall) and Maria (Lori Brown-Niag) set to put Oliva’s manservant Malvolio (Andrew Kober) in his place. 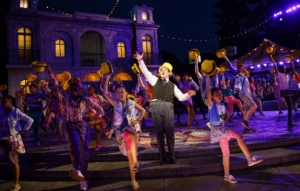 This production is by the Public Theater’s Public Works program, which brings professionals together with amateur actors. They combined with at least 8 civic and cultural groups including: Brownsville Recreation Center, Children’s Aid, Domestic Workers United, Iraq war veterans and retired teachers. The cast was so large it was broken up into two groups. The night I attended I saw the blue group. The signing by members of the New York Deaf Theater was at times lovely, but the problem when you combine these two groups is the show does not always seem professional and the cast of seventy-seven just seems cluttered at times, despite the choreography by Lorin Latarro. 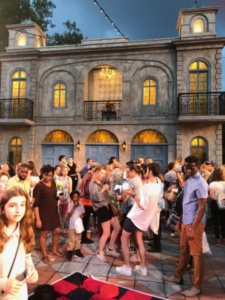 The show before it starts

Despite that there were some wonderful performances. Ms. James, a Tony winner for The Book of Mormon, stands out for bringing both a emotional timbre and a command of the language. Ms. Akuki Goodrich brings a comedic touch. Mr. Blankson-Wood brings a rich voice and swagger to his role. Veteran actor Shuler Hensley (Oklahoma, Young Frankenstein), shows why he won a Tony Award. But it is  Andrew Kober who is hilarious as Malvolio, especially when locked in a Porta-Potty. 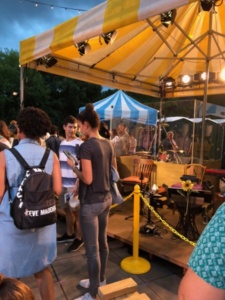 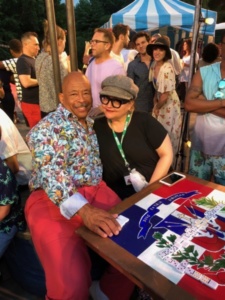 If you like musical cliff notes of Shakespeare, you will adore Twelfth Night.