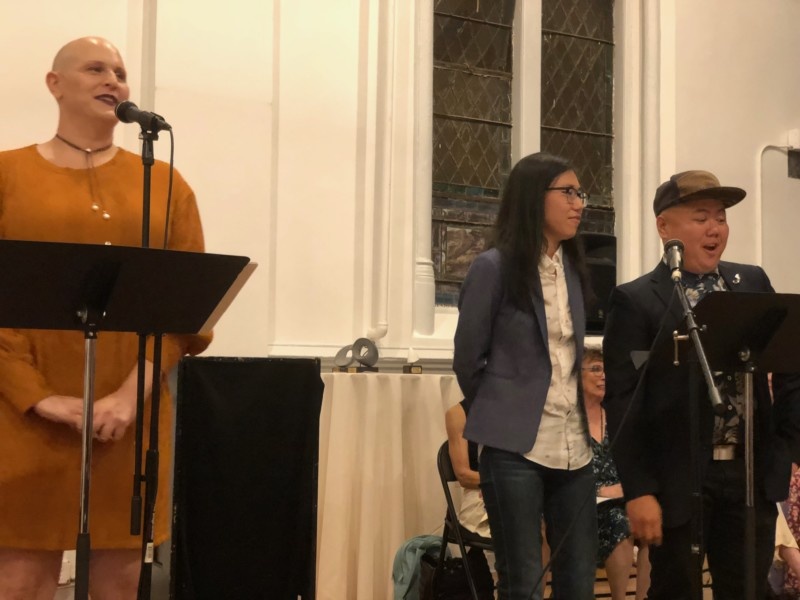 Monday night, The Bret Adams and Paul Reisch Foundation presented the 2019 Idea Awards for Theatre giving away three grants awarded to adventurous new voices in playwriting and musical theatre, as well the visionary playwrights who have inspired and blazed trails before them.

The 2019 Vivace Musical Theatre Award was presented to the composer/lyricist team, Kit Yan and Melissa Li. Recognizing emerging talent and original work with ambitious theatrical ideas and were bestowed with a $30,000 prize.

The award was given by director Mei Ann Teo.

The two premiered two songs from their newest show, Miss Step. Miss Step has already gotten a first draft commission of from 5th Avenue Theater, and a commission from Keen Company for a Keen Teens one act musical.

You can catch this team at NYMF with Interstate. Interstate is an Asian-American pop-rock poetry musical about a transgender spoken word performer, and his best friend Adrian, a lesbian singer-songwriter. They become internet-famous as an activist musical duo. Their political and personal music touches Henry, a transgender teenage boy living in a small Kentucky town, and he finds solace in their art as he struggles with his own identity and family. Interstate shows how two transgender people at different stages of their journey navigate love, family, masculinity, and finding a community in the era of social media.