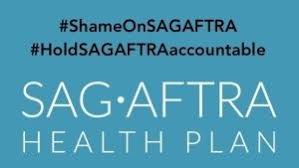 The changes were sudden as actors over 40 with at least a decade of credits and annual earnings of at least $13,000 qualify for insurance, but if their spouse is working they are kicked off primary coverage and performers 65 and older, who are taking their pension, with limited and seasonal income to sessional earnings will not be able to count on their residuals and will be cut out. Those who no longer qualify can continue their coverage through COBRA, which has a $20,000 earnings threshold, which is nearly $2,000 higher than the previous Plan, but with production at a standstill, there is no way a majority of the members can meet this new earnings minimum.

Retirees will find it hard to qualify because under the new plan, as residual earnings are being phased out, they will be left out. Many older participants rely on their residuals to help them qualify for SAG-AFTRA health benefits. The 8,000 senior performers and their 4,000 dependents will have to transition to Medicare coverage. These actors who worked all their lives, paid dues, paid into making this insurance what it is, who were loyal are now the most vulnerable.

Nearly 15,000 people signed a petition to overturn the plan’s revisions as virtual town hall last Friday night ran for eight hours as more than 460 gathered to share their concerns.

To me this sounds like age discrimination and a class action lawsuit.

WriterSeptember 20, 2020
Read More
Scroll for more
Tap
What To Watch September 1st To Take Away The Blues
By Popular Demand: Kevin Hart at The Count Basie Center for the Arts