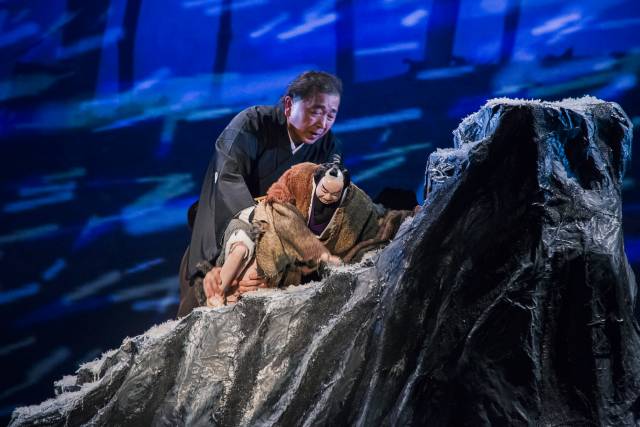 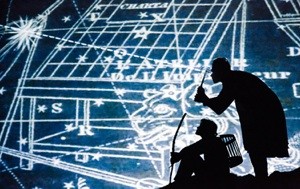 Shank’s Mare, created by Tom Lee and Koryu Nishikawa V, is a puppet show using video, miniaturization, actors and music, all blended together for an enchanting evening mixing the Eastern and Western culture. You will be mesmerized by these stories and the way they are told. 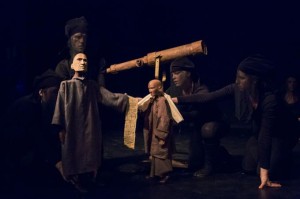 The show is a combination of stories about finding ones path and way of life. Shank’s Mare illustrates how our paths wander in and out and intersect. Before the show begins two dancers purify the space to allow us to experience the journey of the soul. Starting with parental love, we meet a samurai who upon losing his son gets drunk and as his life turns to a life of crime.  Off on a quest to follow a comet an astronomer/ philosopher and his young female apprentice embark on a pilgrimage that is long and full of hardship. To learn about death a golden deity floats beside dead souls as a stag offers spiritual karma. In leaning salvation a spider tries to pay back a favor done a long time ago and redeem the samurai who is damned.

The puppets here are manipulated by Hachioji masters Koryu Nishikawa V and Ryuji Nishikawa V. Chris Carcione’s live feed projections and miniaturized set provide the landscape. Animations by Robin Brater complete the  world. The live music composed by Bill Ruyle and performed by Ruyle on hammered dulcimer and percussion and Chieko Hara on shamisen (a Japanese flute), is a haunting score that provides the emotions for this wordless production.

This show should not be missed.

Stephen BestJanuary 18, 2022
Read More
Scroll for more
Tap
Get On Your Feet! Cause the Rhythm is Gonna Get You
Drama Desk Diamond Jubilee Brings Out the Stars