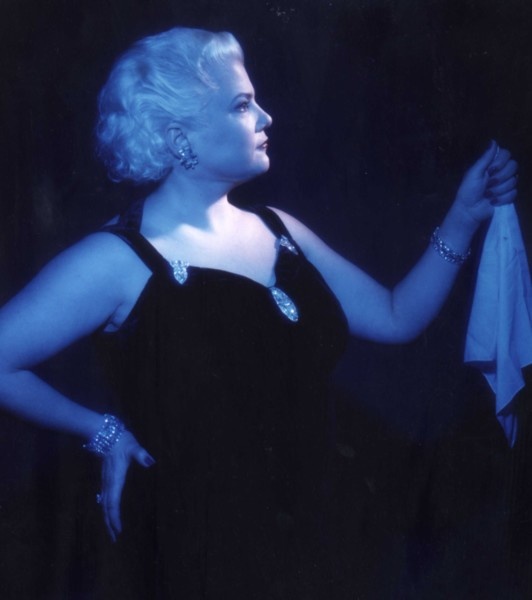 Star performers are defined by their unique gifts. So I’m always amazed when one performer manages to capture the essence of what made another performer so special.

In Red Hot Mama: The Sophie Tucker Songbook at Feinstein’s/ 54 Below, this Tony nominated (Starmites) powerhouse made us feel that Ms. Tucker had never left us. In the days before theaters had amplification, a star performer needed an oversized personality and a voice to go with it.   Ms. Tucker had it. So does Ms. McNight.

The 54 Below cabaret room was an ideal place for Ms. McNight to get up close and personal with her audience, who ate up every borsht belt joke, sexy double entendre, and Yiddish expression. The atmosphere at 54 Below seems to transport us back in time anyway, with its red flocked wall paper and photos of nearly naked Ziegfeld Follies girls. But to add to the period atmosphere, a sign on the wall by the stage re-branded the place as the Latin Quarter nightclub, where Ms. Tucker was a favorite later in her career.

Sophie Tucker was born in Russia in 1886, of Jewish descent. She was brought to America by her parents the next year. She started out singing for tips in their family restaurant in Hartford. She moved to NYC in 1906, and came up in the world of vaudeville in the beginnings of modern musical entertainment. She was forced to perform in blackface at first, because theater managers thought her too fat and homely to be appealing. She rebelled against that, and proved them all wrong.

Her first record producer was Thomas Edison, who could barely contain her big voice on his wax cylinders. She worked with Irving Berlin when the world still knew him only as Izzy Baline. In a career spanning sixty years, she continued to perform to loyal fans until shortly before her death, last appearing on Ed Sullivan in 1965.

Ms. Tucker could sing well enough. But she was just as likely to shout her lyrics with emotion as sing them. It’s what she sang and talked about, not her vocal talent, that made her famous. She compared her own voice to a foghorn.  Ms. McNight, however, has a Merman-esque ring to her voice when she sings, which can cut through even Times Square traffic.

Another great quality of Ms. McNight’s tribute performance is that she actually is a better comedienne than Ms. Tucker was. To my ear, Ms. Tucker often let the material work harder than she did. When Ms. McNight delivers a zinger, she really knows how to stick it.

Ms. McNight took us on a musical survey of Ms. Tucker’s vast catalogue starting with a performance of her first recorded hit, “My Yiddeshe Mama,” which Ms. Tucker had to learn to sing phonetically because she didn’t speak Yiddish. It still became the first ever million-seller record.

Flaunting the conservatism of the Victorian era, Ms. Tucker made her reputation largely with comedy songs that brashly celebrated her own larger body (“I Don’t Wanna Get Thin”), her frankness about sex (“You Gotta See Mama Every Night or You Can’t See Mama at All”), and her championing of a woman’s right to be independent and happy with or without a husband (“I’m Living Alone and I Like It”). Many of her comedy songs, which also included “Last of the Red Hot Mamas,” “Hula Lu”, “He’s a Good Man to Have Around”, “If Your Kisses Can’t Hold the Man You Love,” and “Myron,” all performed during this show, were specialty numbers written by Jack Yellen and various collaborators.  Yellen was even better known for his big, popular hits, “Ain’t She Sweet” and “Happy Days are Here Again.”

As Ms. Tucker, Ms. McNight also performed favorites by some of the other top writers of the day, including “Most Gentlemen “Don’t Like Love” by Cole Porter, ‘The Man I Love” by the George and Ira Gershwin, “It All Depends on You” by DeSylva, Brown and Henderson, and  “After You’ve Gone” by Creamer, Layton and Sherman.

Ms. Tucker also had a big hit with a sentimental favorite that unapologetically put the woman in charge, “Some of These Days” by Shelton Brooks, one of the first successful African American pop composers. It was generally the men, not the women, who would be expected to carry the torch in Ms. Tucker’s scorchers.

Ms. McNight also performed Shelton’s hit, “Darktown Strutter’s Ball”, which today carries racist overtones in its title when performed by a white singer, despite being written by an African American, and being considered appropriate in 1917.  It’s interesting that Ms. Tucker often performed such songs long after giving up being a vaudeville “coon shouter”, a once popular category of white performers who sang comedy songs about African Americans in the style of blackface minstrel shows.

Keeping with the recreationist theme for the evening, Ms. McNight introduced her pianist and musical director, Ian Herman, as “Ted Shapiro”, who was Ms. Tucker’s long time accompanist from 1922 until to her death in 1966. He played the old music well enough.  But when called upon to engage with her in scripted repartee, he seemed not only unprepared, losing his place in both the music and dialogue from time to time, but also was utterly lacking in performance skills outside of his fingers. His comedic delivery was flatter than my Passover matzoh. It was like pulling teeth watching Ms. McNight trying to engage him in what I presumed were rehearsed segments of the show.

But that does not take away from Ms. McNight’s powerhouse performance. She brought to life for us a star from yesterday who should not be forgotten. As long as Ms. McNight channels her so lovingly and convincingly, she won’t be.

My View: New York Old Friend Made New Friends Last Night at Dizzy’s Club
Jackie Evancho Grows Up and Sings Broadway and More at Feinsteins/ 54 Below