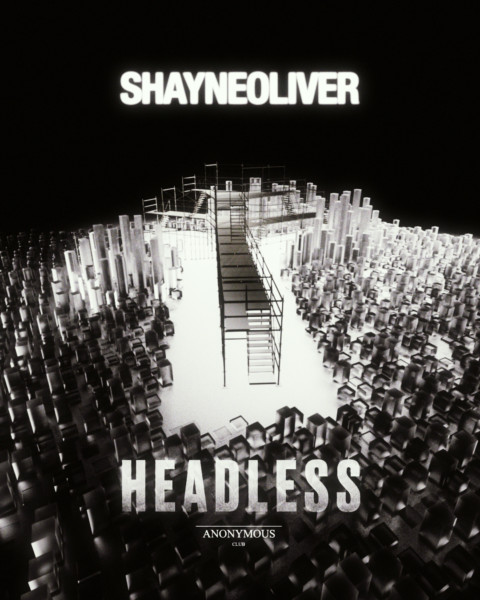 Commissioned by The Shed, Anonymous Club, led by designer and creative director Shayne Oliver, presents Headless: The Demonstration, a three-night live exhibition spanning music, fashion, and performance in The Shed’s Griffin Theater on February 10, 11, and 12 during New York Fashion Week.

Originally conceived as a series of parties in New York City in 2017, Anonymous Club has grown into a working community of artists invited by Oliver to develop new personas and refine their creative practices. Headless: The Demonstration celebrates the vibrant culture the studio has defined and redefined over the years with their family of artistic collaborators.

Each of the three nights centers core aspects of their unique working dynamic, highlighting the ways mentorship and collective experimentation nurture radical art-making.

Night One: Museum February 10, 2022
Museum night will spotlight influential figures in Anonymous Club’s community as well as pay homage to central people and works from Oliver’s past, featuring musical performances throughout the night.

Night Two: Collective, February 11, 2022
Collective night showcases collaborative work through fashion and music, including an introduction to SHAYNEOLIVER, Oliver’s new namesake brand. Oliver and Arca’s joint music project, WENCH, will soundtrack the night with the debut of a new project.

Night Three: Club, February 12, 2022
From thriving in energetic nightlife spaces, Oliver has always intertwined music with other aspects of his practice such as his production-based music project and alias, Leech. Club night centers around the space Anonymous Club holds in New York nightlife and electronic/club music scenes. During the evening, Leech will debut a new project and feature performances with special guests. Leech reflects Anonymous Club’s ethos of surrendering individuality to the chaos of varied selves.

Headless will feature costuming and wardrobe designed by Shayne Oliver for Anonymous Club, and will present an array of artists and original collaborative work including music from LEECH, WENCH, Ian Isiah, Eartheater, TOTALFREEDOM, Izzy Spears, Deli Girls, Shannon Funchess (LIGHT ASYLUM), and a DJ set by OMAR S (FXHE DETROIT) with additional artists to be announced.

“Shayne Oliver is a genuine artistic innovator across and between creative practices.” said Alex Poots, Artistic Director and CEO of The Shed. “There is a shared commitment to experimentation that brought Anonymous Club and The Shed together, and it’s an honor for us to co-produce and host an event series of this quality and intention.”

Tickets are on sale now at theshed.org. All events at The Shed follow the latest health and safety guidelines available at theshed.org/visit.

Shayne Oliver was born in Minnesota and spent his early childhood in Trinidad and Tobago before moving to Brooklyn during his formative years and founding Hood By Air in 2006. Over the past decade, Oliver has become known for his distinctive take on culture, playing with the ideas of power, race, and gender.

Anonymous Club is a multidisciplinary studio led by Shayne Oliver (founder of Hood By Air), working in the idioms of art, performance, and music. Anonymous Club creates radical art and artifacts designed to upend tradition, infiltrate the mainstream, and remake pop culture in its image.