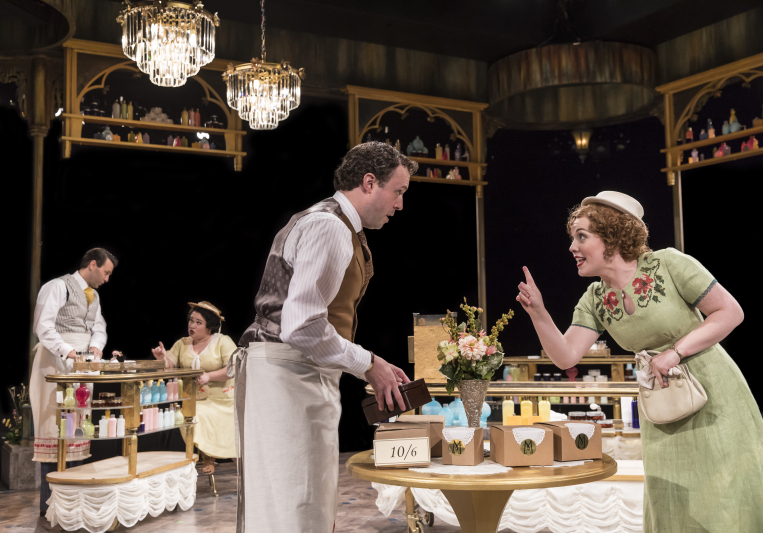 She Loves Me – Cupcake Cute

She Loves Me – Cupcake Cute 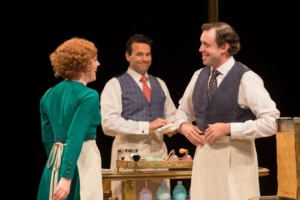 It is next to impossible to walk around downtown Chicago without passing a half-dozen bakeries, or food trucks, selling the individual treat known simply as the cupcake. Currently proving trendy to serve to guests at weddings, baby showers and birthday parties, this singular sweet sensation is a self-contained, mini-treat, enough for a snack but ultimately proving not entirely filling. I draw the comparison of that dainty dessert to the latest restaging at the Marriott Theatre, She Loves Me, the musical. Originally debuting with less than stellar results, closing after only 10 months of performances on Broadway in 1963, She Loves Me had a resurgence a few years back, thanks in large part to New York City’s Roundabout Theatre Company reviving this forgotten “little show that could” and casting Chuck’s Zachary Levi, and Tony Award-winning actresses Laura Benanti and Jane Krakowski in the leading roles. This production eventually received eight Tony nominations and was awarded one, Best Scenic Design of a Musical for David Rockwell. Continuing the cupcake comparison, She Loves Mehad the distinction of opening on Broadway the same year as Hamilton, the mongo-huge, multiple tiered wedding cake of show. Obviously this remount must have caught someone’s attention at the Marriott Theatre and they aptly thought this romantic tale of mistaken-identity and star crossed lovers would play perfectly to their faithful subscriber base. Director and choreographer Aaron Thielen’s tale is quickly paced and painted in wide storytelling strokes, just in time for spring. You could almost hear bird’s chirp as the main couple eventually fell in love. The book by Joe Masteroff, music by Jerry Bock and lyrics by Sheldon Harnick may play a little saccharine sweet for today’s contemporary audiences, but like a cupcake, the occasional sweet fix is good for the soul, if not the waistline. 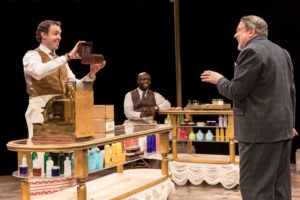 Set in Maraczek’s Parfumerie, this in-the-round performance space was transformed into an endearing boutique store. The rom-com, Meg Ryan and Tom Hanks-esque type characters here are Marriott’s perineal favorites, Alex Goodrich as Georg Nowack and Elizabeth Telford as Amalia Balash, who each began the show as competing retail sales clerks. Their verbal ping-pong conversational stylings reminiscent of the classic Bogie and Bacall films. Their highly stylized bickering, think Cybill Shephard & Bruce Willis from ABC’s Moonlighting, hides a shared secret. Bubbling under their constant quarrelling exteriors, they each have fallen in love with their romantic pen pals, not realizing they are actually writing to each another. This may sound far-fetched on paper, but consider all the “reunited high school sweetheart” stories, reconnecting after years apart on Facebook, or another similar social media platform, that populate most women’s magazines and Hallmark Television movies. Compared to those, the plot twists of She Loves Me fall into the category of legitimately plausible. Their “dear friend” letters fill the holes in their lives when they are not at work. Of course the object of their shared affection would turn out to be their work nemesis. 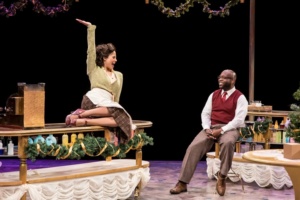 Supporting this lively duo’s story, an array of colorful and quirky co-workers, including lusty Ilona Ritter (Jessica Naimy) attentive Ladislav Sipos (James Earl Jones ll) and the showroom Lothario, Steven Kodaly (David Schlumpf). Each in fine voice and affable comic timing.  As the oppressive boss, Mr. Maraczek, Terry Hamilton made the most of a curmudgeon supporting character with a secret or two of his own up his sleeve. The shop owner done in by his own unfounded suspicions, or is he?  You have to buy a ticket to find out for yourself. Good thing the delivery boy, Arpad Laszlo (Grant Kilian and Johnny Rabe alternating the role) was so attentive to Mr. Maraczek, particularly in early act two. The undisputed comedic standout of the troupe, Steven Strafford’s Café Imperiale Headwaiter, who put all the slap into slapstick. His tightly woven maître d rapidly unravelling all but stole the show’s lively first act. 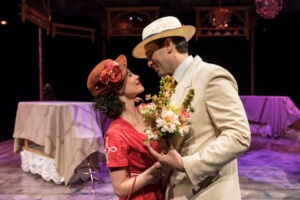 Like a bakery display case filled with the most decadent of desserts, Jeffrey D. Kmiec’s retail shop counter set pieces were pure artistry. The bold pinks, purples, blues and yellows impressed far more than was required. It was refreshing to see the Marriott’s eye for important detailing won out over budget trimming, a philosophy that must remain firmly intact. Jesse Klug’s lighting design also played an important part, highlighting both the store’s display cases as well as the principles in action. Sally Dolembo’s costume design followed suit, in an array of sherbet hued shades, covering the seven principal actors with period appropriate attire, as well as the dozen members of the supporting cast, all portraying various shoppers and restaurant patrons. Music Director Matt Deitchman and his orchestra filling the performance space with wonderful music, much like a bakery fills their space with the scent of nearby cooking delicacies. 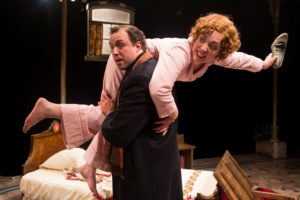 A romance set in a retail shop, She Loves Me is a cute and jovial musical. Originally based on Miklos Laszlo’z play, Parfumerie, but enhanced with silly and song, this breezy and good-humored show will satisfy the sweet-tooth of any musical theater fan. Preferring style over substance, this sugary spring show is a romp of a rom-com, whipped light like a patisserie’s fluffy meringue and just as filling. 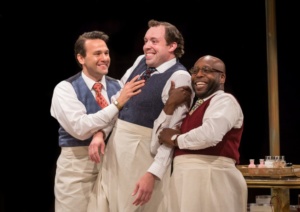 The Marriott Theatre’s She Loves Me is now playing through June 18, 2017