She Says: A Clockwork Orange: Orgasmic Violence Drenched in Beauty

She Says: A Clockwork Orange: Orgasmic Violence Drenched in Beauty 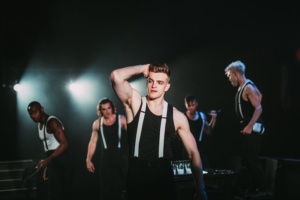 I’ve read Anthony Burgess’s novel and watched Stanley Kubrick’s 1971 film, so I was prepared for this show, or so I thought. But what is happening at New World Stages in A Clockwork Orange has me scratching my head, yet again. The men of the cast are chiseled, buff, and beautiful on the outside. But on the inside, they are warped, sadistic, and their vicious foreplay borders on homoerotic. This all-male version of A Clockwork Orange seeks to entice, and at times, director and I would assume choreographer, Alexandra Spencer-Jones’s production is dazzling. These bodies beautifully leap, twirl, and balletically shove a glass bottle into a male victim’s backside and then proceed to take it the furthest they can. All this is done to classical music as our lead sadomasochist, fifteen-year-old Alex (Jonno Davies), has a thing for Beethoven. 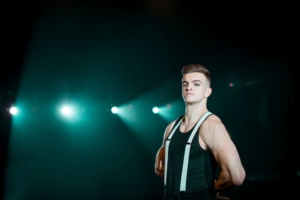 Set in the future of Britain, violent crimes take on a new level. Alex, our “humble narrator”, tells the tale of how he and his gang the droog’s speak “Nadstad” – a cross between Russian and English – commit random acts of “ultra-violence”, and drink milk laced with whatever drug is available. 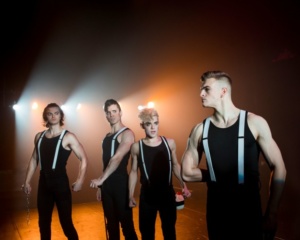 His gang consists of Dim (Sean Patrick Higgins), Georgie (Matt Doyle), and Pete (Misha Osherovich), who goes along for the ride. Alex is the ultimate sociopath; intelligent with no conscious or care for anyone else. 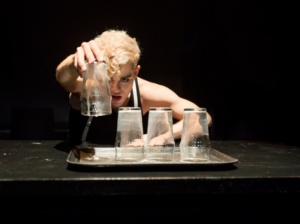 When they terrorize a couple, raping and killing the husband, a downward spiral begins. In the original and film, it was a husband and wife, but here it is husband and husband. One of the partners, a writer, has written “A Clockwork Orange”. 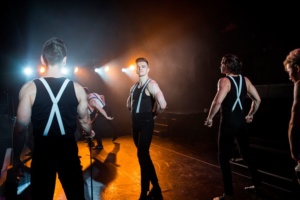 When Alex strikes Dim, he betrays him, which gets Alex sent to reform school. Minister of the Interior (or “Inferior”) (Ashley Robinson) has a new idea on how to reform, but the liberal society feels Alex should be who he is and in the end, they win, but to whose benefit?

Jonno Davies as Alex is hauntingly brilliant and you feel completely insane for admiring the way he has such control of his body. His leaps are spectacular. Sean Patrick Higgins as Dim also impresses.

This A Clockwork Orange glorifies criminal behavior, making it sexy. Suddenly the world feels not so safe and this show seems way too long.