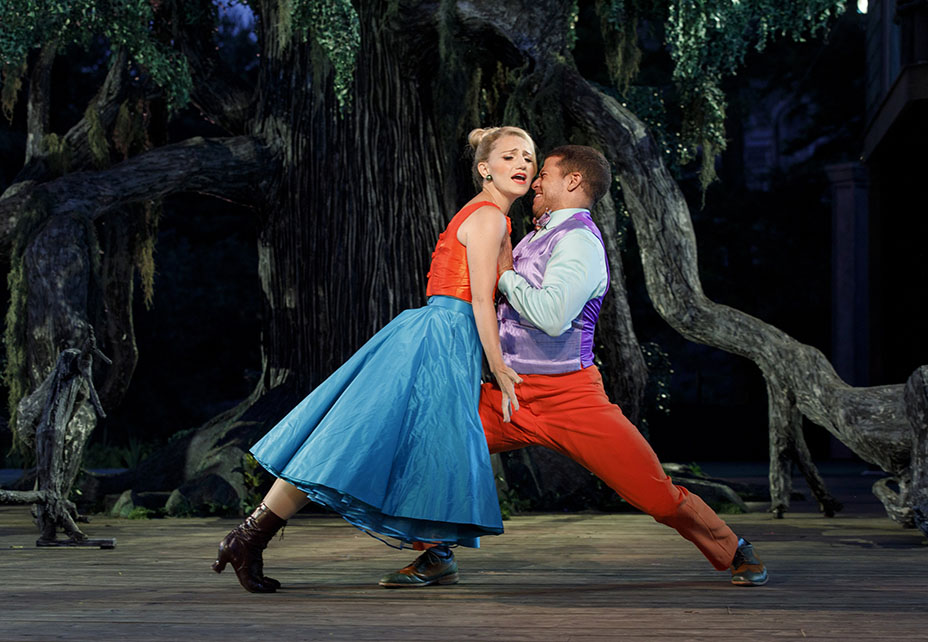 She Says: Ashford and Burstein Delightful in Park’s A Midsummer Night’s Dream

She Says: Ashford and Burstein Delightful in Park’s A Midsummer Night’s Dream 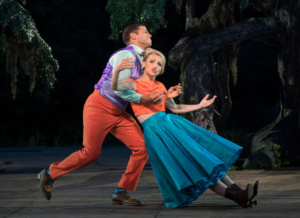 Look for the delightfully adorable Annaleigh Ashford and Danny Burstein to steal every scene and your hearts in The Public Theatre’s, Shakespeare in the Park: A Midsummer Night’s Dream at The Delacorte. For me, this production seemed a little unmagical and disjointed as led by director Lear deBessonet. 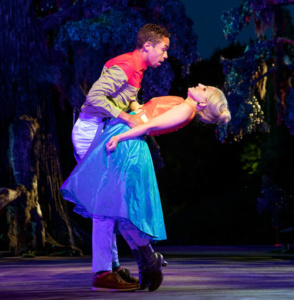 The costumes by Clint Ramos look like they were badly sewn, with no color sense or time reference, until the end when suddenly we are in the 1920’s, well at least some of the characters are. David Rockwell’s set design of a series of tree houses lit by fireflies had musicians performing in a covered shelter nestled into the branches. A slide juts out from the tree on the other side; in between, the characters lull in the foliage. 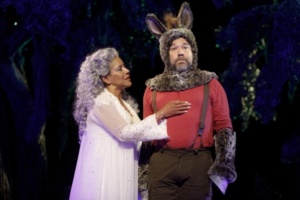 Phylicia Rashad, Danny Burstein Photo by Joan MarcusOne of the most beloved works from the Shakespeare’s cannon, this play entails mistaken identities, young lovers who don’t always fall for the right one, and a clashing of wills. Set during the events surrounding the marriage of Theseus, the Duke of Athens (Bhavesh Patel), to Hippolyta (De’Adre Aziza), the former queen of the Amazons, it follows four young lovers which include Hermia (Shalita Grant), who hopes to marry Lysander (Kyle Beltran) against her father, Egeus’s (David Manis) wishes and Helena (Ms. Ashford), who chases Demetrius (Alex Hernandez) around like an unloved puppy, because he thinks he is in love with Hermia. A group of six amateur actors – the mechanicals – led by Peter Quince (Robert Joy, of “CSI: NY”) and the lovers are controlled and manipulated by the fairies, but mostly a sprite named Puck (Kristine Nielsen). To make matters even more complicated; the fairy queen Titania (Phylicia Rashad) is reluctant to surrender a changeling boy to her king (Richard Poe), so he takes revenge, turning one of the mechanicals, Nick Bottom (Danny Burstein), into an ass. Upon seeing him, Titania falls head over heals. The final scene has the mechanicals performing to the Duke’s delight, as all’s well that ends well. 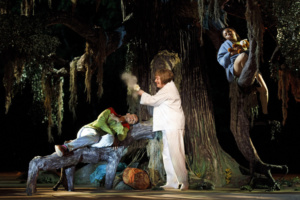 The Fairies are played by senior citizens, which wouldn’t be bad, if they had come out of the film “Cocoon”, but they haven’t and just aren’t that spry. I adore Kristine Nielsen, but she is way to stylized and doesn’t find the mischievous spite in Puck. Also, they dressed her in pajamas and as a pageboy. What were they thinking? 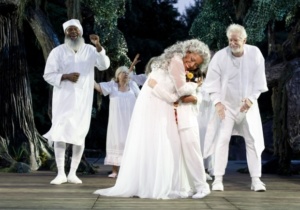 Annaleigh Ashford steals every moment with comic perfection. Lucille Ball comes to mind. Danny Burstein makes Bottom his own, and when he is turned into an ass, you expect him to break out into “If I Were King of the Forest”. 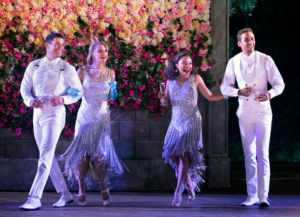 Just to watch Ashford and Burstein strut their stuff, it’s worth seeing this production.

A Midsummer Night’s Dream, at the Delacorte Theater in Central Park. Through Aug. 13th.