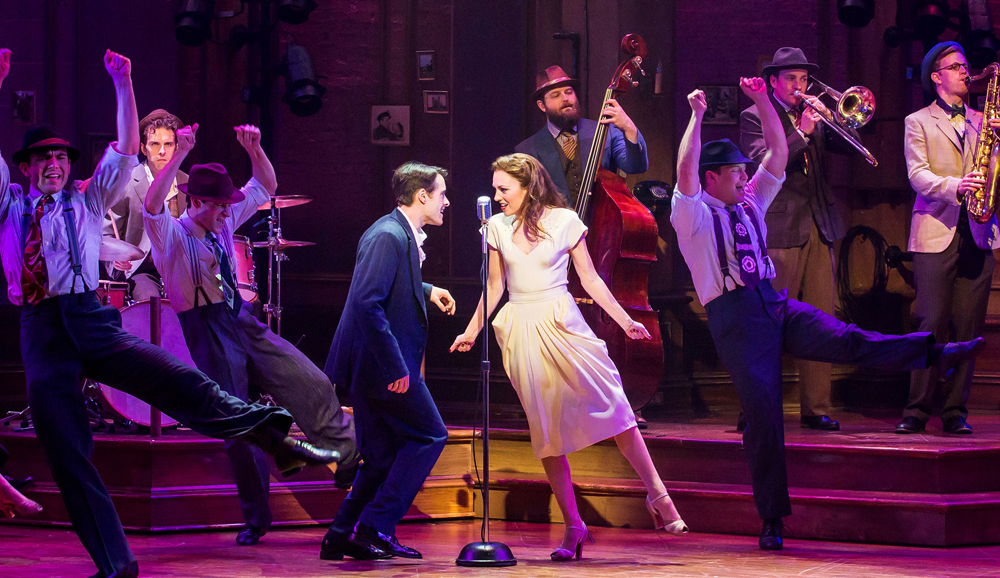 She Says: Bandstand Lost in Translation

She Says: Bandstand Lost in Translation 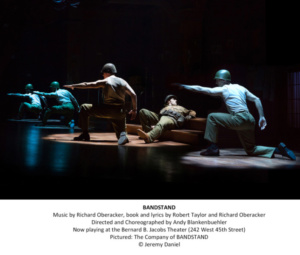 When I saw Bandstand at Paper Mill Playhouse, Andy Blankenbuehler’s choreography was jumping and jiving. The show of course needed some polishing, but it was exciting and wonderful. I’m not sure what happened, but Andy Blankenbuehler the director cut a lot of his numbers (he is also the choreographer) to allowed Broadway newcomers Richard Oberacker and Rob Taylor, the book and lyric writers to re-write. The result is a show that never allows us to digest the horrors of what Vets go through. Instead from the moment the show starts, with “Just Like It Was Before,” we are thrown into a sarcastic jab at what soldiers who see the ravages of war and whose time away from home are faced with. Not only do they have to live with PTSD, but there lives are not here waiting for them. In a sense time has passed them by. 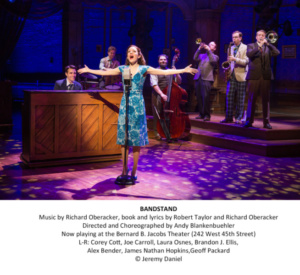 Also different from the Paper Mill Playhouse version is Danny Novitski, (Corey Cott, Newsies, Gigi), who now takes center stage. Danny isn’t a lovable person from the get go. He is arrogant and now terribly messed up. We learn about his life in “Danny Novitski.“ According to the song, Danny was geared to be a star in Cleveland, but now no longer a young prodigy, younger artists have taken his place. It is 1945 and when Danny hears a national song contest on the radio called Tribute to the Troops!, he assembled a band of other vets to catch his break with “I Know a Guy,” one of the best songs in the show. Enter Nick Radel (Alex Bender ) on trumpet, Wayne Wright (Geoff Packard Matilda) on trombone, on bass Davy Zlatic (Brandon J. Ellis, Once), on Sax Jimmy Campbell (James Nathan Hopkins) and drummer Johnny Simpson (Joe Carroll, Cinderella). Each battling their own demons. Bands from all 48 state will compete to write and perform the next great swing song “in honor of our boys in uniform.” Donny’s band has chops, but it isn’t until Danny keeps his promise to his army buddy and looks in on his widow Julia Trojan (Laura Osnes), that the band takes off. Julia is a singer, a poet and hot tomato. When she sings the bluesy winning “Love Will Come and Find Me Again,” about a woman getting to date again after her love has not come home and is listed among the dead, the band places in the finals.

The contest is rigged in every aspect and the band jumps over every trench to make it onto the TV show, only to find out that by singing their song live, they get nothing in return. Making their final stand they sing the heart wrenching, defiant and painful “Welcome Home.” In the end there is a happy ending, but it seems a little MGM and fake considering the rest of the show. 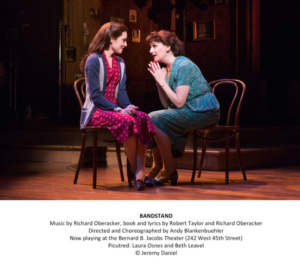 The cast is winning. Laura Osnes (Rogers + Hammerstein’s Cinderella) is at her prime. Vocally she knocks it out of the park and emotionally we care for her. She gives us layers of a person who has to move on, yet has been traumatized by her loss. As her mother thank-God for Beth Leavel (The Drowsy Chaperone) who breaks up the heaviness of this show. With so little to do, she makes the most out of every line and musical phrasing. Sadly the one song she is given “Everything Happens” is not a song worthy of Ms. Leavel or this show. Mr. Bender, Mr. Packard, Mr. Hopkins and Mr. Carroll are all terrific musicians and actors. Part of the problem with Bandstand is that their stories are not flushed out and we really do want to know them. Mr. Cott is handsome, sings and acts well, but we do not like him, therefore the show falls flat. The writers have created a character who we are not empathic with.
Andy Blankenbuehler’s direction is too dark and he chopped his choreography to shreds. In “Breathe” we see the ghosts of the men lost hanging on the shoulders and body of the musicians who survived. It is chilling. Rob Taylor and Richard Oberacker  book and lyrics fall flat and the music by Mr. Oberacker comes off as loud and for the most part noise, thanks to the sound design by Nevin Steinberg. A lot of the tunes are reminiscent of other songs from that era. What is outstanding is the orchestrations by Bill Elliot and Greg Anthony Rassen, which makes this music swing. The set design by David Korins, lighting by Jeff Croiter set the mood and are well done.
Who is Bandstand’s audience? I haven’t a clue. Will vets want to see this? I doubt it as the show is too loud, with no quiet moments to catch your breath. It starts out with a one two punch instead of easing us into this topic. I left the theatre wondering how a show that I was rooting for go so wrong. It pains me not to like this show, as I think vets have been given a raw deal and need to be acknowledged, this show however misses the mark.
Bandstand: Bernard Jacobs Theatre, 242 West 45th St.
Related ItemsAndy BlankenbuehlerBandstandBroadwayBroadway musicalCorey CoatLaura OsnesNew
Broadway