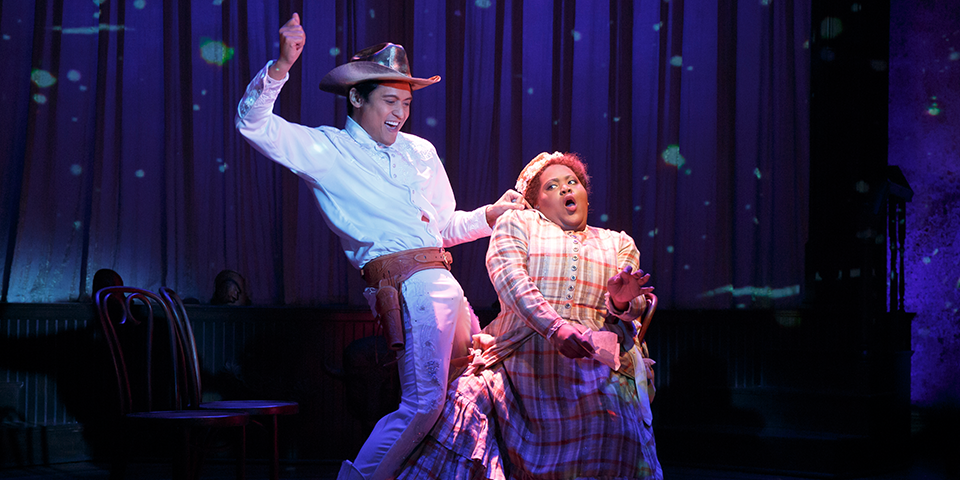 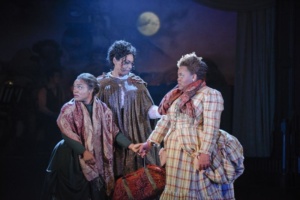 There is a lot to admire about Kirsten Childs’s Bella: An American Tall Tale, which opened tonight at Playwrights Horizons. First, is its leading actress, Ashley D. Kelley, who is joyous to watch. With a powerhouse voice, acting chops, and a winning smile, I am sure we will be seeing Ms. Kelley again. For that point, the entire cast is vocally strong and a great deal of fun. Second, the score is interesting. It is tuneful and goes places you do not expect. Third, the choreography by Camille A. Brown is a high kicking, rootin’-tootin’ good time. 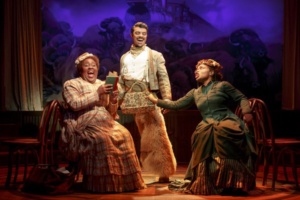 The script, however, is a mixed bag, with the title character taking on the characterization of the Hottentot Venus, as a teenager. Bella (Ashley D. Kelley) has been nicknamed a “Big Booty Tupelo Gal.” She is infectiously confident and enthusiastic with an imagination that has gone overboard. We meet Bella aboard a train bound for her Buffalo Soldier sweetheart (Britton Smith)who’s out West. To amuse herself along the way, we meet the tall tales she invents. From a shy spinster (Marinda Anderson) who is wooed by the sexy, hot, guitar-strumming gaucho with all the moves (the terrific Yurel Echezarreta). A train-robbing outlaw named Snaggletooth Hoskins (Kevin Massey) who bears a striking resemblance to the man she is running away from. And a stripping, Chinese cowboy named Tommie Haw (Paolo Montalban) who channels Elvis in a gold lamé Speedo. 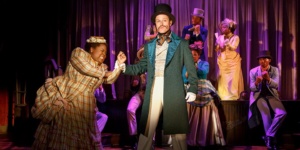 Bella is so wrapped up in her fantasies she doesn’t see that the attentive porter (Brandon Gill) is her knight in shining armor. 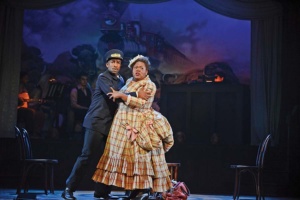 The problem is, Bella is three shows – which is one too many. There is the story about the wealthy landowner (Kevin Massey) who did or didn’t have his way with her. There is the story of her posterior (portrayed by NaTasha Yvette Williams) and the Spirit of the Booty. Then there is also all the Tall Tales, which instead of being one coherent thought, just seem like a mesh of ideas.

Robert O’Hara’s direction also seems a little over-the-top and instead of grounding Ms. Child’s work he has set it to flight.

The costumes by Dede M. Ayite, are fanciful, the set by Clint Ramos doesn’t capture the shows topsy-turvey antic and I am not sure why there were multiple sets.

Bella’sability to not allow diversity to stop her from living and being in her happy place is admirable. I would like to see this piece re-worked and brought back. There is a gem inside all of this disorder.