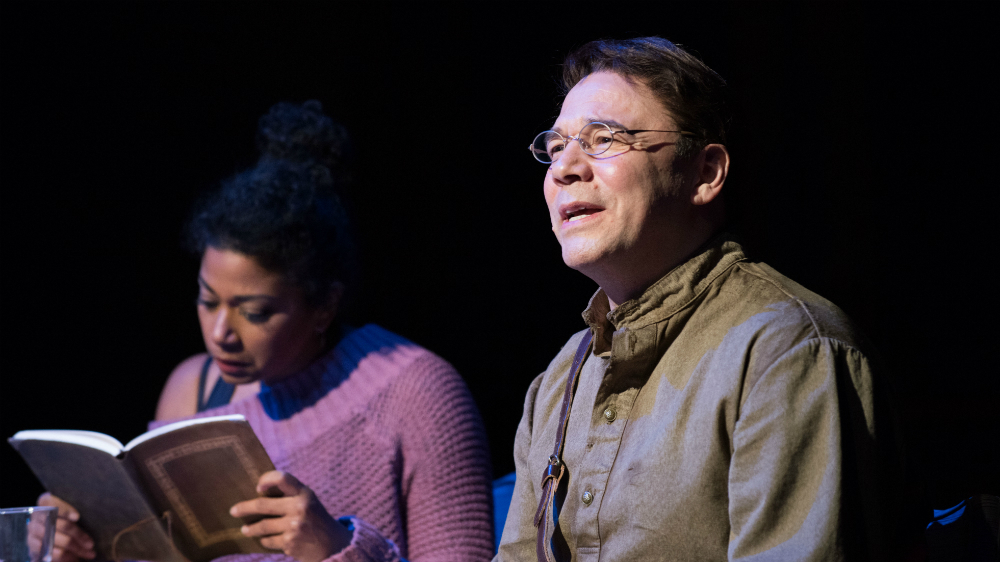 She Says: Describe The Night Fails To Illicit Any Kind of Emotion

She Says: Describe The Night Fails To Illicit Any Kind of Emotion

For a show that is almost three hours long, you would think you would care about at least one character. Not so in Rajiv Joseph’s new drama Describe the Night spannng 90 years of Russian history. 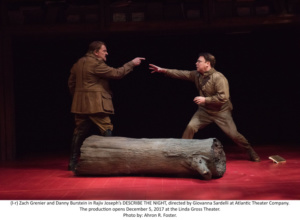 We start with real people such as Russian writer Isaac Babel (Danny Burstein, Six-time Tony Award nominee), who was executed by Soviet forces in 1940. He meets on the battlefield Nikolai Yezhov (Zach Grenier), who rose through the ranks to become the chief of the Soviet Secret Police and “Stalin’s right-hand man.” The playwright plays with the truths of history, Yezhov was executed the same year as Babel, however in the play he lives a long and lonely life. Much of the plot takes place around Yezhov’s wife Yevgenia (Tina Benko), whom Babel’s affair caused his death. They also have Yevgenia living to old age, however the real Yevgenia died of an overdose in 1938. Vova (Max Gordon Moore), is a KGB agent turned politician who turns out to be a Russian president is also misrepresented.. 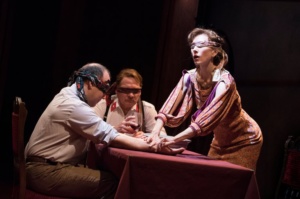 Describe the Night plays with the audiences imagination and in the end because of the skipping of time, I left confused and not exactly understanding what I was suppose to take away from this experience. 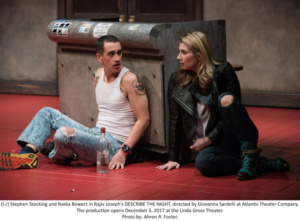 We start in 1920, as Isaac and Nikolai first meet in the Russian Red Calvary. We are then thrown forward to 2010, as a female reporter (Nadia Bowers) desperately tries to rent a car from a frightened agent (Stephen Stocking) after witnessing the Smolensk plane crash, in which most of the members of the Polish government, including the president and his wife, were killed. This is actually the best scene in the whole play, yet we learn nothing else about this and are left dangling. We keep moving forward in the friendship between Isaac and Nikolai. In 1937 Isaac seduces Yevgenia, with little regard for his friendship. We also meet a young Polish singer (Rebecca Naomi Jones), in 1989 living in East Germany, who seeks to defect to the West, but does not want to leave her grandmother Yevgenia. When Vova tries to stop her he is fed leech soup, a disgusting moment to watch.

Mr. Burstein is subtle here and only in his death scene do we feel a pang as he begs Nikolai not to burn his life work. Mr. Grenier, just shouts and is incredibly hard to understand. I missed half the dialogue, due to his slurring of words. I am a huge fan of Ms. Benko, who goes from a women who’s sexuality steams from every pore to a spry old lady with some bite. Ms. Jones sings well and manages to have a moment. Mr. Moore is wonderful in what he does, but his character has no sympathy. Mr. Stocking and Ms. Bowers have the most real moment of the whole play and their scene is the only one in which you want to know more of what happened.

Giovanni Sardelli direction is just as confusing as the play and three hours seems even longer. His scenes are dream like or should I say nightmarish, but what is real and what is truth blurs to the point of non caring.

I am a huge fan of Joseph’s plays The Bengal Tiger at the Baghdad Zoo (a Pulitzer Prize finalist) and Guards at the Taj, which I found poetic and interesting. His points about oppression and societies downfalls spoke volumes in those pieces, here they just get lost in translation.