She Says: Desperate Measures Is Just For You

She Says: Desperate Measures Is Just For You 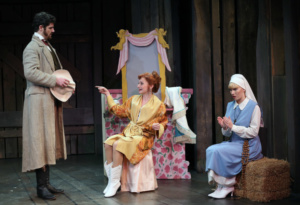 Recently there has been a run of plays that leave your heart sick and wondering at the state of theater. Thankfully there is the York Theater Company’s Desperate Measures to offset the grim state of both our world and our current options for entertainment. This adorable, witty, tuneful version of Shakespeare’s Measure for Measure is what I was expecting at CSC when I attended As You Like It.

This westernized version is reminiscent of Mel Brooks’ Blazing Saddles and Das Barbecü. The book and lyrics by Peter Kellogg (Anna Karenina), done in Iambic pentameter, are clever, hilarious, and unexpected. The music by David Friedman (Listen to My Heart) is melodic and gets under your skin. I heard several people commenting on wanting the CD and I have to agree, this is one to own as soon as it is released. 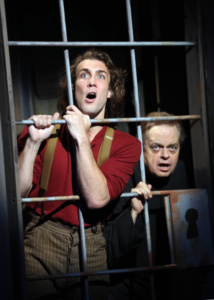 The show is based on the saving of Johnny Blood (Conor Ryan), who shot a man for hitting on his salon-gal-singer girlfriend, Bella Rose (Lauren Molina). Johnny is due to hang in two days. The sheriff (Peter Saide), wanting to help Johnny, tracks down his sister, Susanna (Emma Degerstedt), who’s due to take her vows as a Catholic nun. It seems the German ex-officer Governor Richterhenkenpflichtgetruber (Nick Wyman from Broadway’s Catch Me If You Can) doesn’t believe in clemency for anyone. When the Governor sees Susanna, he offers Johnny’s life for her virginity. The Sheriff and Susanna come up with the idea to switch Susanna for Bella, but when they do the Governor only becomes more enamored. Now the Governor will only comply if Susanna marries him. As the drunken Irish priest (Gary Marachek) who no longer believes in God is about to perform the ceremony, identities are revealed and the unlikely lovers all unite. 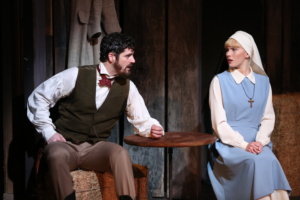 Peter Saide is ruggedly handsome with a beautiful voice that will have you swooning on ‘That’s Just How It Is” and “Stop There”. Conor Ryan brings to mind a young Gene Wilder, sweet and slightly dim-witted with vocals that purr. When he kicks his heels up in “Good to be Alive” we feel his joy. His duet with the rubber-faced Lauren Molina, “Just for You”, is infectious as these two show how perfectly matched comedians can bring delight. Molina also shines in “It’s Getting Hot in Here”. She’s like a western Norma Cassidy from Victor/Victoria. As the sweet-as-pie, prickly-as-a-tumbleweed heroine, Emma Degerstedt brings a warmth and a sincerity to this hysterical evening of fun. Her song “What is this Feeling?” about wanting that sexy Sheriff’s kiss lets us know a nunnery was never for her.  Gary Marachek gives the priest moments to call his own, but it is Nick Wyman’s fabulously layered performance as the scheming Governor that is worth the price of admission. He steals the show with “Some Day They Will Thank Me” and “What a Night”. 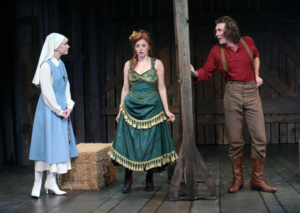 This is a must-see show for anyone who loves musicals, wants to laugh and likes well-crafted theatre.

Desperate Measures: York Theater Company, 619 Lexington Avenue (entrance on 54th Street) until Oct. 15th, but look for this to extend.

Suzanna BowlingJanuary 15, 2022
Read More
Scroll for more
Tap
He Says: Desperate Measures: Brooks & the Bard Would Be Proud
The Gospel According to Thomas Jefferson, Charles Dickens and Count Leo Tolstoy: Discord or The Guilt of The Masses