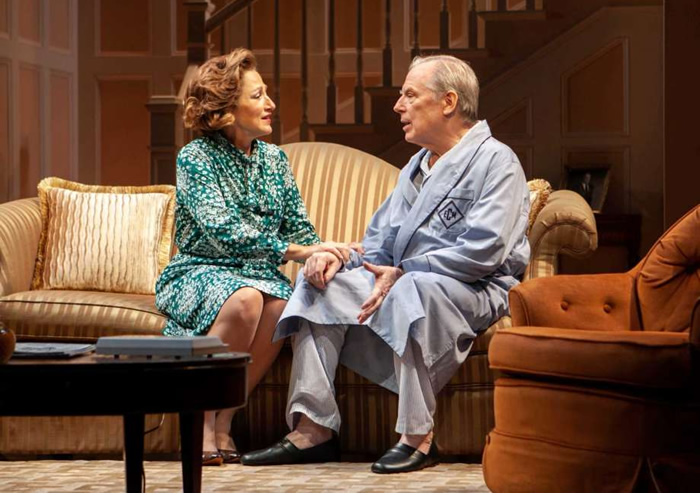 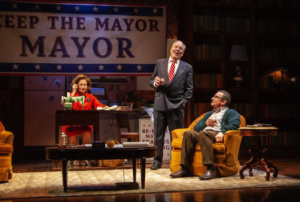 Sharr White’s new political play, The True, takes on politics without shoving it down your throat or trying to tell you how to think. It is smart, witty, and well done. 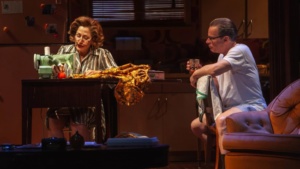 The play brings back to the stage the formidable Edie Falco, (Nurse Jackie and Sopranos) as Dorothea “Polly” Noonan – a foul mouth Betsy Ross who believes in the Democratic Party – and Erastus Corning II (Michael McKean) the long-standing mayor of Albany. The time is 1977 and women should be seen but not heard. Though married to Peter (Peter Scolari), Polly has been working unofficially for the mayor for decades. Because of their closeness, there has always been an untrue rumor that Erastus and Polly have been lovers. However, the trio have been friends forever. When Daniel O’Connell – Albany’s Democratic political boss and an old associate of Corning’s – dies, the Mayor tells Polly “With deep regret, I’m going to have to end my association with you” which devastates her.

Erastus is about to be dethroned as mayor and Polly is not about to let that happen. She is determined to get him re-elected, despite the fact for the first time in 35 years he is losing the primary challenge to State Senator Howard C. Nolan (Glenn Fitzgerald), who wanted Polly to work for him. Instead, Polly meets with Charlie Ryan (John Pankow) to strike a deal.

Erastus and Polly have a love that could combust. They share a mutual love of politics and the party, but there is Peter and both care about him.

One of the most powerful moments of the play is when Polly goes to bat for a young politician (Austin Cauldwell) whom she is grooming, only to find out he does not have commitment to the party or to politics. To Polly, this is the end of honor.

Falco is fearless, down-to-earth, and so savvy and passionate about politics she makes you want to cheer. Scolari is her perfect foe, as he fleshes out his character with warmth. Some of the best scenes are between these two as they light up the stage with understanding. When Peter tells Polly he’s heard all the gossip but knows she loves him, we see the humanity in this play. To prove there are no small roles, Tracy Shayne as Betty nearly stops the show with a drunken walk up and down stairs. She doesn’t need words, Ms. Shayne does it in a look.

Scott Elliott directs this show like a well-oiled chess board. Derek McLane’s set manages to transform into several homes of the era and that hideous orange is everywhere. Clint Ramos’s costumes are deliciously what women in business wore and make me so happy these are no longer an option.

All of the characters in The True are based on real people. Turns out Polly is the great-grandmother of U.S. Senator from New York, Kirsten E. Gillibrand. Ironically, Mr. White did not interview any of the real-life people, which is maybe why I liked it so much.

Politics in 1977 is like a dying dinosaur with deal-making, loyalty, and moral quandaries turned over for high scale blackmail, selling out our country to the highest bidder, and false faces acting true.

The True: The New Group at the Signature Center,480 West 42nd St. Until October 28th.