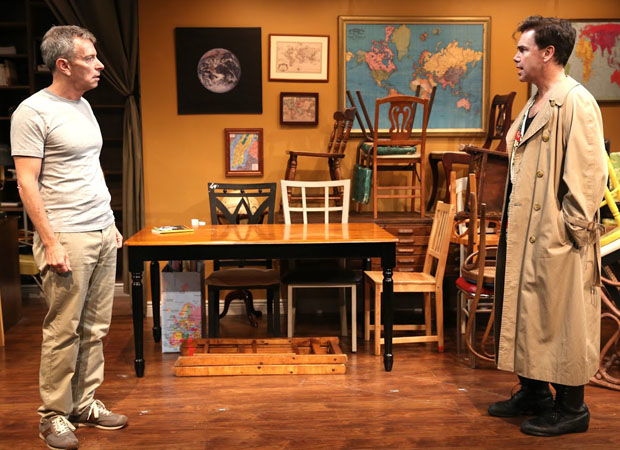 She Says: Empty Chairs Will Have A New Meaning After Lonely Planet

She Says: Empty Chairs Will Have A New Meaning After Lonely Planet 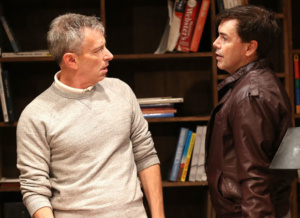 Steven Dietz’s Lonely Planet had its New York premiere in 1994. Now in the capable hands of the Keen Company, the revival reminds us of how deep the loss still is from those who have died.

Jody (Arnie Burton) and Carl (Matt McGrath) are the odd couple, and at times you wonder how these unlikely friends stay so bonded. Jody runs a store that sells maps and he’s is anal and likes things just so. Not an easy task, since Carl cannot tell the truth about what he does, or anything for that matter. Things get serious when Carl starts bringing an assortment of chairs to Jody’s shop. The chairs progressively take over the space without rhyme or reason, until one day Carl explains that every chair was owned by someone they knew in their community who has died from the epidemic and that he can’t stand seeing them empty.

It starts to become apparent that Jody hasn’t left his store for months, rarely going outside. Carl has placed the chairs in hopes that Jody will realize something bad is happening and Jody must bear witness and help the problem. We find out that Jody has not been tested and is scared. Carl finally gets Jody to get tested for the first time and thankfully he is negative. However, a few months later, Carl’s chair appears in the shop and soon it will be empty. Carl shows up to the shop to gather comfort and make sure that Jody will carry on the task of remembering.

Arnie Burton and Matt McGrath will have you falling in love with these men who barely know each other, yet cling to each other as those around them are disappearing much like the customers that once frequented Jody’s store. Burton and McGrath are filled with humor, pathos, and varied emotions that stay just a little bit hidden beneath their performances. They are touching and heartwarming, leaving an audience full of sniffling humans who still remember how many were lost.

But Mr. Dietz takes on the fear of living, the disappearance of countless men and women from AIDS, and the paralyzing fact that we might be next. He serves this up on a silver platter with an array of so many types and styles of chairs. The play is so simple, yet so profound. Like Ionesco’s The Chairs, which is alluded to in Lonely Planet, suicide is not what will leave an absence. The chairs, in a sense, become the souls who forever live on in our hearts and in our daily movements.

Jonathan Silverstein’s staging is simple with room for laughs. Anshuman Bhatia’s set brings forth an array of lives lost by the assortment of chairs, but it is Paul Hudson’s lighting that is a chilling reminder of time passing.

This powerful play with these marvelous actors has a one-two-punch, reminding us that this is a Lonely Planet and it is only by connection that we live on.