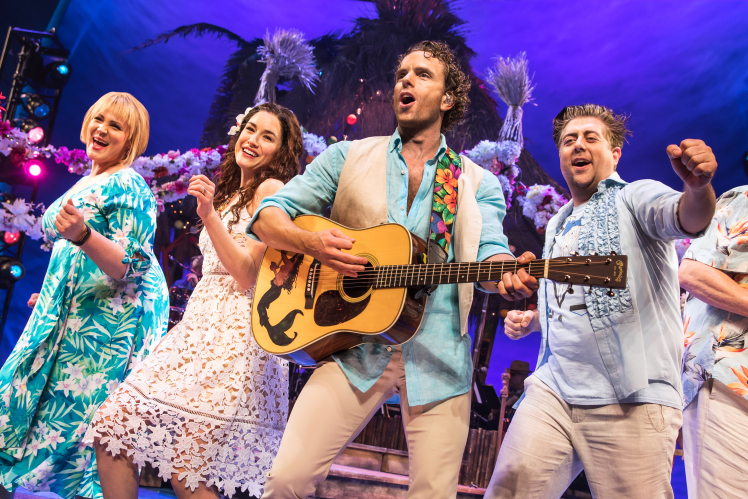 She Says: Escape or Run to Margaritaville

She Says: Escape or Run to Margaritaville 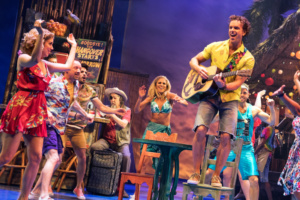 Paul Alexander Nolan and the original Broadway cast of Escape to Margaritaville. Photo by Matthew Murphy

I am a firm believer that there should be shows on Broadway for everybody. If you love jukebox musicals, don’t really care about a script, and love Jimmy Buffett music, you are going to love Escape to Margaritaville. I watched as a sea of bobbing heads with drinks in hand swayed and sang to the music of this island crooner. They were overjoyed, but unfortunately, this show did not appeal to me for several reasons. The script by Greg Garcia and Mike O’Malley is so banal that it makes Sponge Bob Square Pants look college level. They even ripped off the exploding volcano sequence. As Tully puts it, “the deeper you go, the less interesting it gets” and how right he is. Brick suffers flashbacks concerning life insurance agents who appear in fatigues to fill up space and add a tap dancing number. But I am getting ahead of myself. 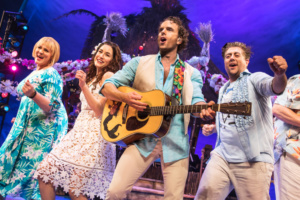 As the show starts, we meet Tully (Paul Alexander Nolan of Bright Star), a good-looking singer who hits on all the tourists, and his bartending best friend Brick (Eric Petersen), who believes that getting stoned and wasted is conquering life. When environmental scientist Rachel (Alison Luff) arrives at the Margaritaville Hotel with her best friend, bride-to-be Tammy (Lisa Howard), the four hookup. Once the vacation ends, Rachel and Tammy are back in Ohio continuing life, as Tammy is getting married to her low-life boyfriend, Chadd (Ian Michael Stuart). A volcano erupts on the idyllic island, so the alcoholic beach-bum J. D. (Don Sparks) flies the hotel owner, Marley (Rema Webb), and the boys to Ohio to win back the girls they love. Brick and Tammy connect, but it takes Tully and Rachel a few more songs before they can have a happily-ever-after ending. 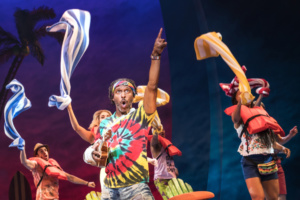 Just for fun, we are given a dancing cloud Rockette number, an aerial cheeseburger fantasy by a bride whose been put on diet by her less than perfect boyfriend, and a scuba diving scene in the middle of a song (this was actually good) that swims across the stage, as dancers do a “Beach Blanket Bingo” number. Everything is done with a wink and a nod. 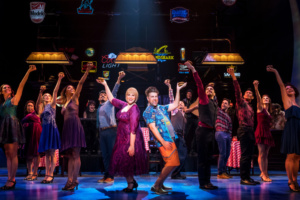 The actors are talented and sing exceedingly well. Paul Alexander Nolan and Alison Luff exude chemistry and though the plotline doesn’t make sense, they do. Lisa Howard shows off her fabulous chops and comic timing, but it is Eric Petersen who embodies the shows joie de vivre. Sparks, Webb and Andre Wark, all have moments where they shine. 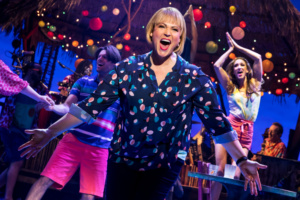 Christopher Ashley, keeps the action flowing, which isn’t exactly easy considering the whole show is literally built around Buffet’s lyrics. Kelly Devine’s choreography is perky, but not inventive and it all seems a little like last year’s Trip of Love. Walt Spangler’s set and Paul Tazewell’s costumes seem ala Club Med. Howell Binkley’s lighting is bright. As for the music, it is well-done thanks to Christopher Jahnke. 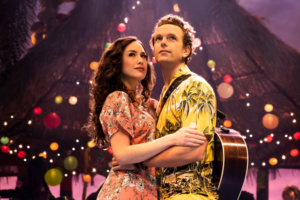 This two-hour spectacular will win a lot of hearts, but at the end of the show, as hundreds of beach balls descended into the audience and I was hit rather hard in the head, I thought this is so indicative of the show, or maybe I just needed to be drinking a salt rim margarita in the sun.