The new musical Amélie, is based on the French film of the same name by director Jean-Pierre Jeunet. Amélie has a few things going for it. First up; is it’s star Hamilton and Natasha, Pierre, & the Great Comet of 1812’s Phillipa Soo. Vocally she is perfect, trying innocently to bring us on this insiped journey. The problem is her journey is so banal, that we don’t really care. As her love interest Nino, Adam Chanler-Berat (Peter and the Starcatcher, Next to Normal ) has wonderful chemistry with Soo, so though the story-line is limited the relationship is believable. Their quirky romance does have some magic, especially towards the end with the charming “Stay.” 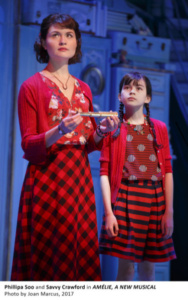 In a strange way this show is a little like Big Fish with a less interesting book by Craig Lucas, an a less musical score by Daniel Messe and Nathan Tysen. Tysen peaked with The Burnt Part Boys. 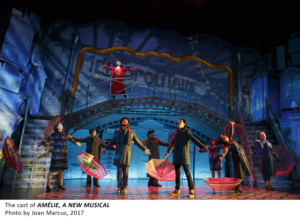 We are introduced to Amélie and her world with “Times Are Hard For Dreamers.“ Young Amélie (Savvy Crawford), has been saddled with neurotic, psychologically challenged parents (Manoel Felciano and Alison Cimmet) who homeschool her and don’t show their love. Amélie  starts to live in her own imagination. When her mother is killed by a falling suicidal tourist, she is left isolated with her distant father who shows more love for a gnome. As she transitions to an adult (Soo), her younger self sees her off to Paris. She gets an apartment and a job as a waitress, but can not connect. Suzanne, the café’s owner and a former circus performer (Harriett D. Foy), Georgette, a hypochondriac waitress (Alyse Alan Louis) and Gina,  Amélie’s other co-worker (Maria-Christina Oliveras), try to engage her, but she does not know how to socialize. Amélie‘s regular customers Gina’s obsessive jealous ex-boyfriend, Joseph (Paul Whitty), Hipolito, a poet (Randy Blair) and Philomene, an airline hostess (Cimmet) fill out the cafe. They are all misfits  in need of some help. 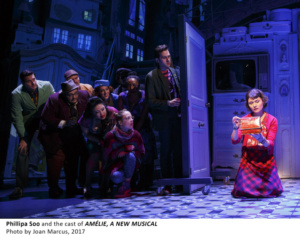 When Amélie finds a child’s treasure box after learning of Princess Diana’s death she seeks to return it and meets Nino, at the train station. Her heart immediately skips a beat but she has not a clue at how to respond. Her shut in next door neighbor artist (Tony Sheldon, Priscilla Queen of the Desert), tries to help her connect, especially when Nino loses his book of photo booth images. As Amélie seeks to do good deeds she becomes more and more distant. In the end love and romance happen and its a happily ever after ending. 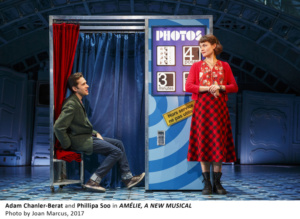 The cast is all talented, especially Soo and Chanler-Berat. The direction by Pam MacKinnon is well done for what the material allows. The set and costumes designs by David Zinn are more like a tilted Alice in Wonderland, though I did love the curtain and the hopping bunnies in the beginning. 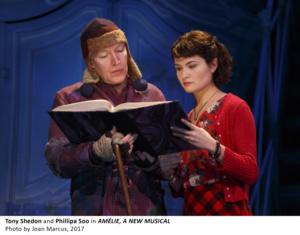 The biggest problem here is nothing really happens and what does is like a Hallmark card without the substance. We have adorable moments with Fluffy the goldfish (Whitty), but then again we a “Three Figs“ number that makes no sense and a bizarre Elton John number where (Blair) neither looks or sounds like the icon. The music is monotonous and the lyrics contain lines like “Love is like another diagnosis, like bacterial vaginosis.” Seriously, disgusting and gross and definitely written by a man.
Amélie misses the complexity of a girl who has several layers to her. It gives us the frosting without the cake and skips the meal.
Amélie: Walter Kerr Theatre, 219 West 48th St.
Related ItemsAdam Chanler-BeratAmelieBroadwayCraig LucasDaniel MesseJean-Pierre JeunetNathan TysenNewPhillipa SooSavvy Crawford
Broadway

Suzanna BowlingMay 12, 2022
Read More
Scroll for more
Tap
He Says: Amélie: What’s She So Afraid Of?
Make Your Broadway Debut with a Walk-On Role in Chicago and Experience “All That Jazz”