She Says: Fire In Dreamland Left Me Out In the Cold

She Says: Fire In Dreamland Left Me Out In the Cold

In 1911, one of the beloved amusement parks of Coney Island, Dreamland, was burned to the ground. While no one died in this tragedy, many animals were sadly lost, except for a group of Shetland ponies that were miraculously saved. 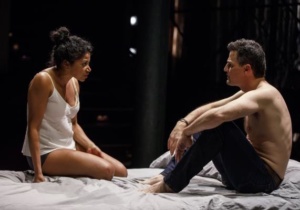 Rinne Groff’s play, Fire in Dreamland, focus’s on that exact incident. In the first scene, the play opens to Kate (Rebecca Naomi Jones) crying on a boardwalk. Snap. Upstage, someone, who we eventually find out is Lance (Kyle Beltran) closes a film slate, and the once crying Kate is now poignantly explaining a movie she saw once. Another snap, and you’re back to reality, where Jaap Hooft (Enver Gjokaj) is standing, one shoe off, distressed about dropping his cellphone into the ocean. The two start talking, and next thing you know, they’re living together in Coney Island. 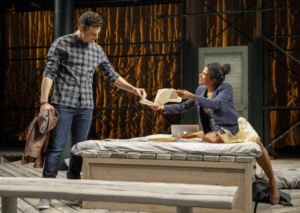 The snaps between the different realities made this show incredibly hard to follow. While the book was funny and well-written, I feel like some sort of cue, maybe lighting or sound would help us distinguish the different worlds and made the play much more coherent.

Jaap is infatuated with the idea of creating a film about the fire at Dreamland, focusing largely on the black lion. When the lovey-dovey couple is lying in bed and talking about the potential for this film Jaap wants to create, Kate brings up a couple of the downsides, and Jaap gets flustered and storms out, going to buy licorice. Like with most shows, the fight ends and things go back to normal. Jaap has now shot some footage and is buying bitcoin to send to India to have CGI added into it, creating a perfect five-minute teaser for his new film, which he seems to see as his first-born child. 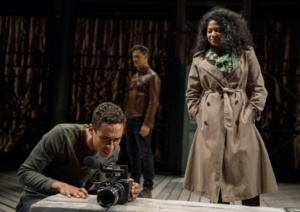 Gjokaj made Jaap more than just easy on the eyes, he was a lovable dreamer that you wanted to root for until you see the darker side about his film later in the show. You felt empathy for him because he was truly the naïve dreamer—much akin to the young college graduates moving to New York City and thinking that they will be able to take on the world in their first week.

Meet Lance, the guy who snaps all the realities back and forth. You learn that he runs the gear room at the film school and has been signing out equipment to Jaap even though he dropped out. He comes to the apartment in order to retrieve a camera, and Kate makes small talk while they look. She eventually mentions that she and Jaap are to be married, and Lance is shocked, thinking that Jaap is gay. There seems to be a subplot of a relationship between Jaap and Lance, which is thrown away—never mentioned or even alluded to again.

I felt like the little subplots made the show even more confusing and it made Lance’s character much less relatable, which then made him almost unlikable. Lance seemed very one-sided, but it worked for the character. While stiff, Beltran played Lance with a geeky flair. Beltran didn’t seem to make him feel hurt around Jaap or really seem to feel much of anything. I wish the book would have given him more to work on as a character and that director Marissa Wolf could have cleared away some of the confusion. Scenic and costume designer Susan Hilferty, along with lighting by Amith Chandrashaker and  sound design by Brendan Aanes, though set the tone for this play.

At the end of the show, I was excited about the caliber of performance that I just witnessed, but the plot just doesn’t stick. Two women behind me lean over to each other and ask one another if they knew what had just happened. I laughed and told them I was in the same boat, and they went on to tell me that they were lost for a lot of the show and it was hard to tell what’s in her head, what’s in the movie, and what’s in real life.

This show was an absolute whirlwind from beginning to end—some parts were moving and deeply captivating (i.e. all of Jones’s monologues) while some were just confusing. The calming ending was a nice touch, but this was too much to be packed into ninety minutes. Life is confusing, yes, but our stories shouldn’t be quite as confusing as life itself.

Fire in Dreamland: The Public Theater