She Says: Frozen Has Icy Magic

She Says: Frozen Has Icy Magic

Disney’s Frozen at the St. James Theatre does its job. There is the wow factor, it stays true for the most part to the story, it is tuneful, and it manages to break through to the heart with its message of unconditional love. Does it melt the hardest of hearts, no… because it is trying too hard. A prime example is the second act opening number “Hygge” (pronounced “Hoo-ga”), which just seems out of place and put there because they needed a comedic second act number. Also, some of the additional lyrics by Kristen Anderson-Lopez and Robert Lopez and book by Jennifer Lee are a little on the crass and adult side. 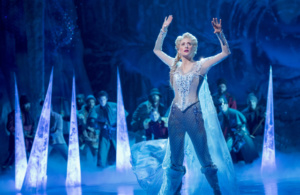 Director Michael Grandage and costume designer Christopher Oram put Anna and Elsa into pants, to keep up with the women empowerment themes, but couldn’t this have been done in a dress? 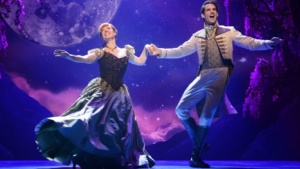 The plot is the same: Royal sisters, Elsa (Caissie Levy) and Anna (Patti Murin), are separated because Elsa can freeze people with her hands. Their parents search for a cure, but die, leaving Elsa to rule. Trying to block her magic, which is turned on by her anger and passion, she wears gloves. When her gloves get accidentally removed, her power is revealed, and she runs from her kingdom. Anna goes in search of her. Along the way, Olaf the snowman (the comedic Greg Hildreth), Sven (the fabulous and unseen, Andrew Pirozzi) and Kristoff (a rather good, Jelani Alladin) offer their assistance. The rock people now resemble Avatar. Hans (a well-cast Jeff Riddle) and Weselton (the always powerful Robert Creighton) are there to block their way, but in the end, love prevails. 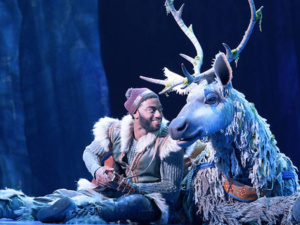 Olaf is an homage to Julie Taymor’s creations and Sven is an adorable puppet created by Michael Curry, reminiscent of War Horse.

What stands out is the set design by Oram, lighting design by Natasha Katz and special-effects by the master wizard Jeremy Chernick. Elsa’s palace is just what you expect, gleaming with ice crystals as Levy delivers the prerequisite “Let It Go”. I found her song “Monster” a perfect new pop song and expect it to hit the charts. “Do You Want to Build a Snowman?”, “For the First Time in Forever”, and “Love is an Open Door” are brought back to life as Patti Murin channels the perfect Anna, but it was Mattea Conforti as the young Anna who stole the show. Give this girl a Theatre World Award, now.

Frozen does thaw you out, but does it make you feel like summer, no… more like spring.

Suzanna BowlingAugust 4, 2022
Read More
Scroll for more
Tap
The Low Road May be One of This Year’s Best Plays
He Says: Rocktopia Rock and Rolling My Eyes And Cringing