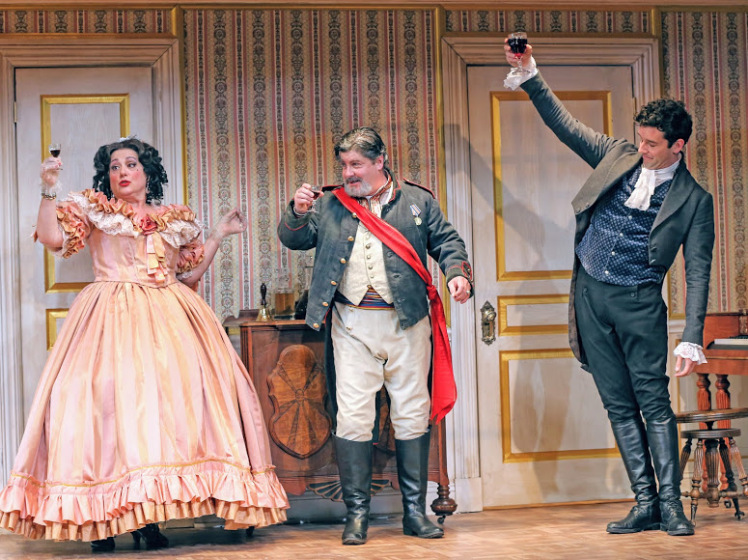 She Says: Get Ready To Laugh Heartily At The Government Inspector

She Says: Get Ready To Laugh Heartily At The Government Inspector 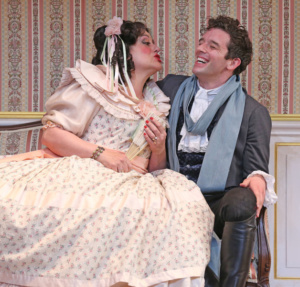 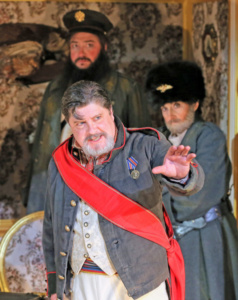 Corrupt politicians, bribes and pay offs are at the helm of Nikolai Gogol’s 1836 comedy The Government Inspector. Under the hilarious direction by Jesse Berger founding Artistic Director of Red Bull Theater Company, the insanely funny production at The Duke on 42nd Street is night well spent at the theatre. Berger has collected a company of A-list actors at the top of their game. Michael McGrath (Tony winner for Nice Work If You Can Get It), Michael Urie (Buyer and Cellar), Mary Test (Queen of The Mist) and Arnie Burton (off broadway’s 39 Steps) all up their game of scene stealing with a wink and a nod in this comedy of errors. 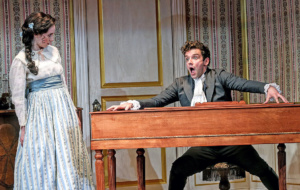 We heave been dropped into a Russian town in the middle of nowhere, where the Mayor, Anton Antonovich, (Michael McGrath) is as corrupt as they come. He has learned that the Government Inspector has come to judge him and his even more corrupt town, so he seeks him out. He comes upon the foppish civil servant, Ivan Alexandreyevich Hlestakov (Michael Urie) and mistakenly takes him for the Inspector. Antonovich and the Judge (Tom Alan Robbins), the School Principal (David Manis), the Hospital Director (Stephen Derosa), the Doctor (James Rana) and two landowner twins, Bobehinsky and Dobchinsky (Ryan Garbayo and Ben Miehl) start to bribe him. Ivan is such a narcissist that he does not even realize that he has been mistaken for someone else. He becomes a guest in the Mayor’s house as the Mayor’s wife (Mary Testa) and daughter ( Talene Monahon) come onto and make plans to run off with him. The towns people Grusha (Mary Lou Rosato), the Police chief (Luis Moreno), the Innkeeper’s Wife (Kelly Hutchinson) merchants and peasants come to Ivan and beg for his mercy and he accepts their bribes to banish Antonovich to Siberia. The mayor gives Ivan his horses and carriage, expecting Ivan to marry his daughter and promote him to a better post until the Postmaster (Arnie Burton) suddenly arrives carrying an intercepted letter which reveals Hlestakov’s true identity, a man who has been there all along. 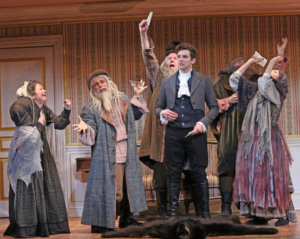 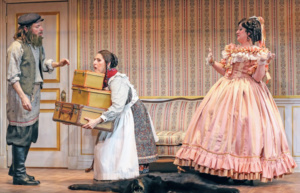 Jeffrey Hatcher, has created an adaption that brings to mind our present political dilemma. The double decker set by Alexis Distler, the costumes by Tilly Grimes and the lighting by Megan Land and Peter West, all create this ridiculous commentary on our inability to see what is in front of our face. “The Emperors  New Clothes,” is a repeating metaphor. 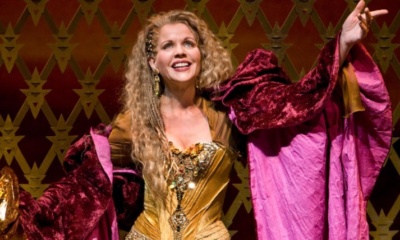