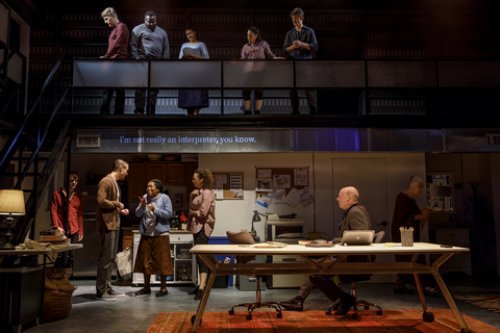 She Says: I Was Most Alive With You, But the Question is, Who?

She Says: I Was Most Alive With You, But the Question is, Who? 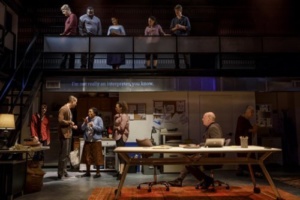 Craig Lucas’ I was Most Alive with You at Playwrights Horizons is an ambitious undertaking that doesn’t make all of its points. The show is done by two casts, one of which features seven versions of the cast above who translate for the most part what the actors on the main stage are saying into ASL. The problem here is the shadow versions of Ash (Seth Gore), Astrid (Beth Applebaum), Pleasant (Amelia Hensley), Carla (Christina Marie), Farhad (Anthony Natale), and Mariama (Alexandria Wailes) don’t always sign but watch the action from there vantage point. 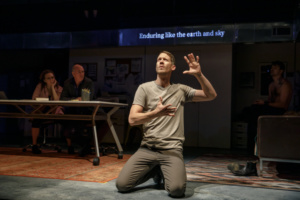 From the moment the play begins, we know something bad has happened. We meet Astrid (Marianna Bassham) and her TV-writing-partner, Ash (Michael Gaston) whose deaf son, Knox (Russell Harvard), is being left alone for the first time. Something happened during a Thanksgiving dinner and its effects have taken their toll. Needing to come up with a good TV show so they do not lose their insurance, they turn this incident into a script using the Book of Job as reference. It seems their old TV show has not been doing well. 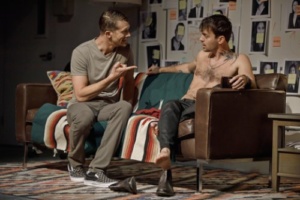 It’s Thanksgiving, as we flashback to meet Knox, praying for his drug and alcohol addicted Muslim, hearing-challenged boyfriend, Farhad (Tad Cooley). Knox will not have sex with Farhad until he gets clean. He is also annoyed that he will not sign. It seems his mother, Pleasant (Lisa Emery), will also not use sign language and this is a contention between them. Knox makes Farhad agree to be good at his Grandmother’s (Lois Smith), which is where they are heading for the holiday. 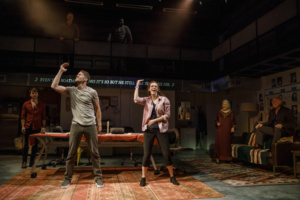 During the course of dinner, we learn that Knox considers his homosexuality, deafness and his own past addiction as blessings. It is here that the book of Job trials begin. Lucas tells Knox the details of his adoption, he learns Farhad’s HIV status and that he has stolen pain medication from his beloved Grandmother, who has terminal Cancer. Also, she has lost all the money supporting the family through a Ponzi scheme. In a car wreck, Knox loses his hand, his faith, and his mother who decides it’s time to pack it up and move. And if that weren’t enough, it turns out his mother was an atheist and the grandmother’s healthcare worker (Gameela Wright) is a Jehovah’s Witness whose son is incarcerated on Death Row for murdering a bunch of people. 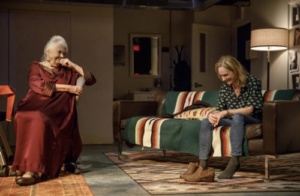 By Act Two, the once praying Knox is trying to end it all in multiple of ways. The issue concerning sign language reverses, but the discussion stops. Who was faithful and like Job is never fully expressed, just the disasters that fall. We never learn about the long-running TV series Ash and Astrid have been working on for years, or why Pleasant, who claims her whole life was her son, leaves him without a good-bye when he most needs her. This show asks a multitude of questions and never answers them because not one character has been fully fleshed out.

The actors do the best with what has been given them but seem schizophrenic from scene to scene. I blame this on the direction and script. The fabulous Lois Smith gets the most out of her role and we know who this woman is. She is the anchor of this production.

Director Tyne Rafaeli does her best keeping both casts coherent but doesn’t manage to keep the characters on an even keel.

Lucas is a talented playwright but has missed the mark here. Too many ideas make it seem as if he is working out his own faith and we are the therapists sent to help unravel this conundrum.

The set by Arnulfo Maldonado also seems cold and distant just like this play.

I Was Most Alive with You: Playwrights Horizons, 416 West 42nd St. through October 14th