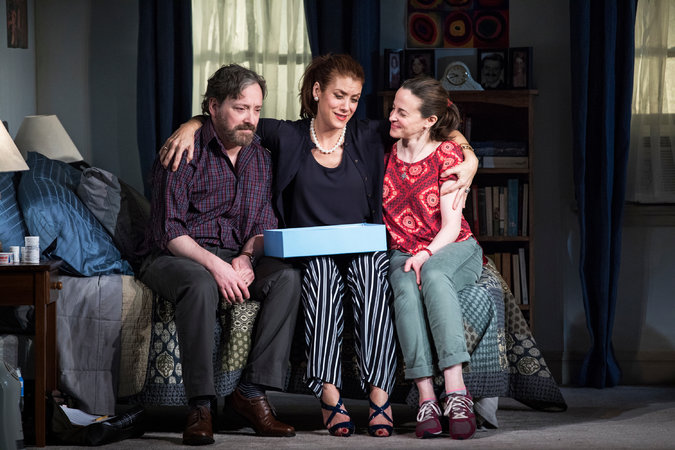 She Says: If I Forget Is Like Dust In The Wind

She Says: If I Forget Is Like Dust In The Wind 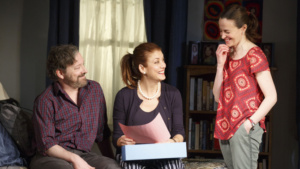 Steven Levenson’s If I Forget, a Roundabout Theatre production, sets us in 2000 just when the collapse of the Israel-Palestine peace process dissolves. The Fischer family is divided politically, religiously and morally. They are Jews who are not really Jewish. Their mother has just died and in the second act their father Lou (Larry Bryggman) has had a stroke. Like the play The Human’s, these are not really likable people nor are their circumstances believable. They are neurotic, bitchy and cruel. The siblings consist of Holly (Kate Walsh,“Private Practice”), the eldest who has married well to a  lawyer named Howard (Gary Wilmes). Their son (Seth Steinberg), is over his parents and yet cares deeply. Michael (Jeremy Shamos), the middle child and only son, teaches Jewish Studies even though he is an atheist. He is about to published a book, called “Forgetting the Holocaust,” claiming the Holocaust should be forgotten. Michael and his non Jewish wife Ellen (Tasha Lawrence), are dealing with their daughter, Abby, who has mental “issues” and is in Israel. Sharon (Maria Dizzia), the youngest, has taken on the role of caretaker, though she would prefer her siblings help out more. Michael wants his father’s opinion of his book, but his words have hurt the World War II vet who helped liberate Dachau. Lou’s description of what he saw and can’t forget, is searing as is Michael’s reasoning. Like the political climate now, both sides have valid points. 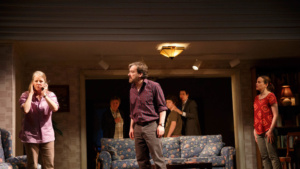 Levenson’s who wrote the book to Dear Evan Hanson, relies on a whole lot of talking (2 1/2 hours worth) and whole lot of opinions. The play in a nut shell is how the faamily should divide their collective heritage, a dollar store on prime real estate. Holly wants it as a business, Michael wants to sell it and Sharon wants it to stay with the Guatemalans who rent it for peanuts, due to personal interests. This play is like the Jewish version of The Cherry Orchard. In the end family does matter here, but its so difunctional.

The show is wonderfully cast, with Mr Shamos taking the helm. The direction by Daniel Sullivan’s keeps the material moving and has a sensitive touch.

Mr. Levenson’s does have a way with dialogue, which is like a roller coaster. The problem with If I Forget, is it crashes and burns to a strange halt. Also some of the plot lines are highly implausible. Michael publishing his book when he’s up for tenure, not knowing how it would effect his dad. Michael and Ellen sending they’re highly disturbed child to Israel alone. Howard’s credit card fraud and the reasoning behind it, just when the family needs the funds….convenient.  Sharon’s predicament with her ex and the tenants of the store, seem more made up for political correctness.

There is a line in the play, which talks about everything turning into sand. All I could think of was “does that mean this play will turn into sand and blow away into dust, because that is how it felt watching it. Lots to say with nothing accomplished.

If I Forget: Laura Pels Theatre at the Harold and Miriam Steinberg Center for Theatre: 111 W. 46th St. until April 30th.