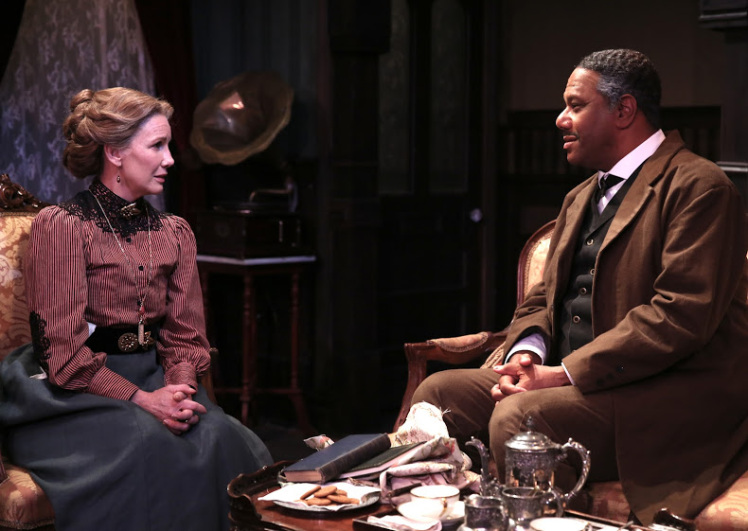 She Say’s: If Only Had Some More Umph

She Say’s: If Only Had Some More Umph

“Why did you invite me here tonight?” asks Samuel Johnson (Mark Kenneth Smaltz) in Thomas Klingenstein’s If Only starring Melissa Gilbert. By the end of the play we are asking the same thing, as nothing here has changed.

Reminiscing about her days as a nurse during the Civil War, wealthy and married Ann Astorcott (Gilbert) once bravely asked President Lincoln for milk for the wounded. Having known the President as a youth, he granted her request, but in return he asked her to look after a wounded soldier and runaway slave. Lincoln has befriended the young man and seeks knowledge. When Ann does visit, a repressed unrequited, unspoken romance begins between the unlikely pair. The two never stood a chance and still don’t. When Ann runs into Samuel, she invites him to her home. Her husband (Richmond Hoxie) has to go away on business and the two are left alone, except for the young orphan (Korinne Tetlow) Ann has also brought home. Lonely and discontent the two play a cat and mouse game that becomes insipid as nothing will and does come from it.

Gilbert is very much like a grown up Laura Ingalls Wilder with her childlike voice and presence. We believe the simplicity of her, but this character has nowhere to go because she never really breaks the mold. Smaltz’s has a presence, but is confused as to why he is there, as are we? We know as he does this is but a folly, for this is going nowhere. There isn’t any drama if the characters avoid their feelings.

The small space at the Cherry Lane Theatre has been nicely designed by William Boles, with costumes by Kimberly Manning, lighting by Becca Jeffords, and sound design by Andy Evan Cohen.