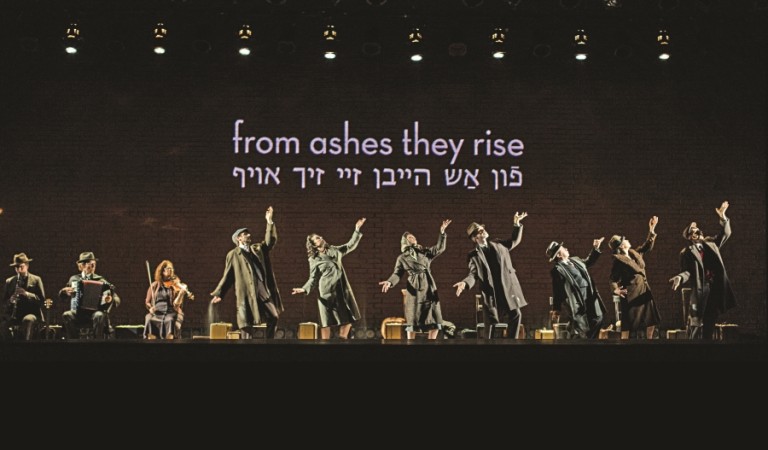 She Says: Indecent One of The Best Plays Of The Year

She Says: Indecent One of The Best Plays Of The Year 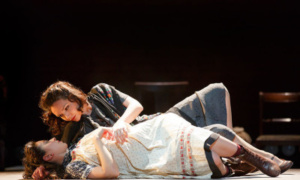 God of Vengeance a serial play by Sholem Asch was originally performed on the LES, in Yiddish, but when transfered to Broadway in 1923, the cast was jailed and labeled as “indecent” for presenting Lesbianism on stage for the first time. Indecent is the new work by playwright Paula Vogel, transferring from the Vineyard Theatre to Broadway. It takes on God of Vengeance and the consequences that production, created. Ms. Vogel and the wonderful director Rebecca Taichman, have created a powerful piece that almost seems like a dance. 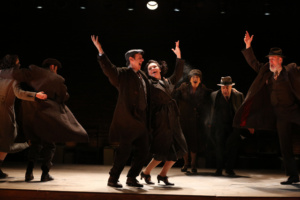 The symbolism of ash flowing from the selves of the performers is utilized by David Doorman’s stylized movements. This cast is seamless as they tell the tale of Jewish culture, theatrical history and homosexuality, which ends in a devastating way, yet seen in another light, one of hope. 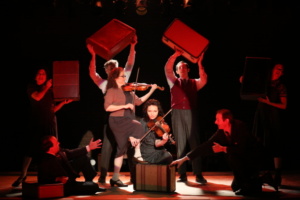 It is 1906 and we first meet Sholem (Max Gordon Moore) in a Warsaw apartment and the reading of the play God of Vengeance. For those who do not know this play, it is about a brothel owner and his daughter. His wife (Mimi Leiber) is an ex-prostitute and along with his seventeen-year-old daughter, live above the brothel downstairs. The brothel has made the man prosperous, but he aspires to something more—respectability, and towards that end, he hopes to marry his precious daughter to a Talmudic scholar. His daughter strikes up a friendship with the most-desired prostitute and the two begin a love affair that develops and finalizes in completion in a rainstorm.

In Indecent Sholem’s wife and actress Madje (Adina Verson) plays the young daughter. Originally the play is ostracized by the Jewish community, but is beloved throughout Europe. During the play all the actress who play the daughter fall for the actress playing the prostitute (Katrina Lenk). When Lemml (Richard Topol), the tailor hears the play, he is deeply moved and becomes committed to the production and the stage manager for life. Famed actor Rudolph Schildkraut (Tom Nelis) stars, giving the show a name when attached to it. God of Vengeance comes to New York, and is highly successful in Yiddish and then moves uptown thanks to producer Harry Weinberger (Steven Rattazzi) first to The Provincetown Theatre, then to Broadway. The show is re-written in English to become more commercial and eliminates the lesbian love scene, which is the heart of the show. Sholem agrees to this not having command of the english language. His wife is replaced and the other cast members, along with the stage manager are furious at the changes. The cast and producer are charged with obscenity and the show closes in one day.

Ms. Taichman uses projections to indicate if the language is English, German or Yiddish. She also uses it to tell the passing of time, which is quite clever and keeps us in the clear about what is going on. Klezmer songs and music by Lisa Gutkin and Aaron Halva, along with dances keep the story light and flowing. It is almost the same technique used in Cabaret to establish the jovial mood covering the horrors to come. Asch, becomes beyond depressed when he travels to  Europe and sees what anti-Semitism has wroth. He comes back never to return to Europe. His performers and stage manager do not escape fate and end up returning back home presenting the play until their death.

Indecent’s cast, director’s and play are first rate. It is hard to single anyone out, because this is a true collaborative effort. My only draw back to this play is it seems to have three ending and that takes away from the power of the piece. The transfer from The Vineyard also includes a lot of changes making this once subtle piece a little too blatant. I actually preferred it more at The Vineyard.

No matter the changes, this is a show not to miss. It is powerfully acted and beautifully staged.

Suzanna BowlingJanuary 26, 2023
Read More
Scroll for more
Tap
Giggle, Giggle, Quack – Creative Writing Down on the Farm
On the Red Carpet With Indecent