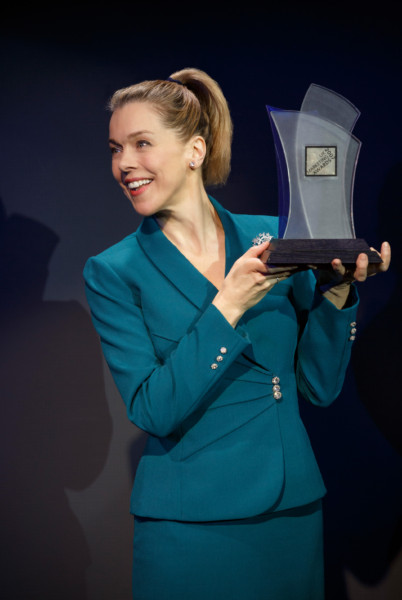 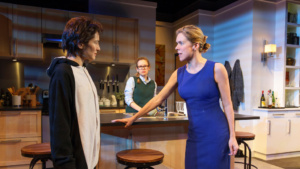 In Penelope Skinner’s new play Linda (Janie Dee), we meet our heroine who is 55 and at the top of her game. She is beautiful, successful, self made, with a loving husband, two children, a fabulous home, a office with a view and she thinks she is making a difference. She has headed up an award winning marketing campaign for an anti aging cream helping older women feel confident. But not everything is as it seems and it is soon about to unravel. 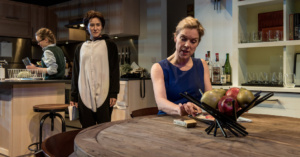 Linda gives a rousing speech on how woman of a “certain age” are desirable and are to be celebrated. She has knock this campaign out of the ball park. At home her loyal steady husband Neil (Donald Sage Mackay) is preoccupied with his midlife crisis. He has joined a band, to which Linda is uninvited. Her 25 year-old daughter Alice (Jennifer Ikeda), who once was so promising has been traumatized and lives in skunk pajama’s and barely gets out of bed. Linda is making her go to the office with her the next day, hoping to restart her daughters life. Her youngest daughter Bridget’s (Molly Ranson) is auditioning for acting school and wants to do a male monologue because men have all the best parts and the most lines. 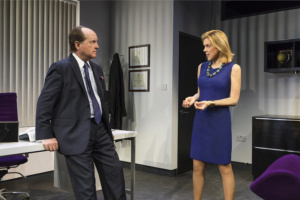 Linda’s downfall starts the next day when her boss Dave (John C. Vennema) gives her campaign to the new kid on the block, the beautiful, young and conniving Amy (Molly Griggs) who like Eve Harrington, wants everything that Linda has. Amy’s campaign is that this product needs to go to the younger market and Dave agrees. Linda fights a battle she has no way of winning, she is being fazed out due to her age. Leaving the office early her loyal steady husband Neil (Donald Sage Mackay) has been having an affair with a much younger women Stevie (normally Meghan Fahy. I saw the understudy Kathleen Littlefield) who she finds in her kitchen in only her husbands shirt.

Meanwhile we learn more about Alice who ten years ago, was humiliated when her boyfriend posted sexual pictures of her on the internet. She was tormented especially, by one girl, who turns out to be Amy. Alice in trying to escape the hell she went though has hid her beauty. She has chopped off her hair and the skunk suit hides what she does to escape the pain. Even at the office Alice has found a way to keep the skunk suit on, just hidden. Alice confronts Amy who does not recognize her. Alice connects with the temp Luke (Maurice Jones) who offers her a religious escape. 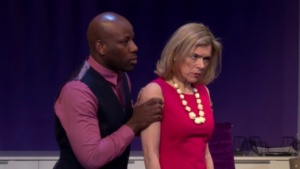 Back at the office Linda has a melt down in the conference room while presenting Amy’s campaign. Luke helps her through this crises of home and career and the two end up sexually, to which Luke captures on his cell phone. He’s into selfies. Amy sees the incrimination evidence and what was done to Alice comes to haunt Linda thanks to the manipulating Amy.

In the end Alice takes off the suit and we see the extent of her scars, but she embraces the chance at a new life and leaves. Bridget forgets her lines and has failed the audition. Neil is allowed to come back home, but their relationship will never be the same.  As for Linda she is has lost. She is over 50 and must make way for the younger blood who will continue in her tracks. She peaked when she won her award back when she was 30 and as much as she has tried to allow women to feel comfortable and successful as they age, the fact is nothing has changed this disgusting truth.

Janie Dee is a whirlwind of talent and she adds just the right amount of narcism and warmth that we truly care about this women despite her flaws. The rest of the cast is also terrific, especially Ms.Ikeda, whose heartbreaking story tugs on your heart and soul. There is another play here about Alice.

Director Lynne Meadow’s handles this material with a sensitive hand. She deploys the carousel of life with a fabulous set by Walt Spangler. From posh offices, to a kitchen, bedroom and a bathroom where truths are revealed we feel the fast paced tempo and anxiety of Linda’s world.

Penelope Skinner’s play is hard to take but she is right. Women who want a career, sacrifice a family that isn’t messed up. They become hardened and as they get older a little more desperate as their bosses and husbands want younger and younger women. I will never forget when I was 40 I applied and won a job. I always looked way younger than my age. When I came back to fill out all the paper work, they were thrilled I was hired, then they asked to photographing my drivers license, a comment was made about my birthdate, which I thought nothing of. By the time I got home, suddenly I was no longer hired. No reason given. By the time I was 50 I could not get hired. It is not only a man’s world, but a world where women are considered no longer viable the older they get. It may not be “PC” to state this but this is the glaring truth and Linda does not back down, but shines a light glaringly at the facts.