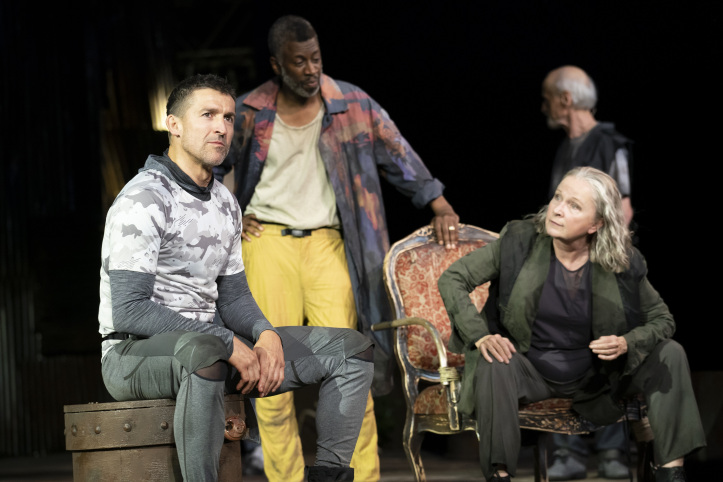 Shakespeare in the Park production of William Shakespeare’s Coriolanus just seemed to scream. It poured down rain from 7:45 to 8:45 so maybe my review got as soggy as I did. The rarely performed tragedy didn’t start until 9:15 and before the intermission about 50 people left. By the end of intermission over half the audience left. Many it was a bad night.

The last time this play was done in the park was 40 years ago, with Morgan Freeman and a young Denzel Washington in the ensemble.

Coriolanus (British actor Jonathan Cake) is the title character, who we are told is an arrogant Roman general. Though we see Coriolanus’ superiority, and contempt for those he sees as weak and foolish, the problem in this production is we see his point. Cake is superior Shakespeare actor and except for Kate Burton, who plays his fiercely conniving mother Volumnia, everyone else seems in a different play.

Cake and Burton’s commend of the language and verse is like music to your ears. Cake is also beautiful to look at, with his imposing height and well-sculpted masculinity, oozing out of every pour. Despite that it is Ms. Burton who you will remember. Burton is like Lady Macbeth, cat like in the way she manipulates. We see her love for her son, especially when she desperately attempts to dissuade him from destroying Rome.

As the Roman tribunes scheming Coriolanus’ downfall Enid Graham and Jonathan Hadary, seem unlikely candidates to influence a crowd and yet because of the text they do.

Who adds to the production is Teagle F. Bougere as Coriolanus’ friend Menenius and Louis Cancelmi as Aufidius, the Volscian general with whom Coriolanus forms a temporary alliance.

Most of the play however, drags and seems more like 5 hours than 3. Director Daniel Sullivan has not managed to capture our interest. Keeping this version in what seems like the apocalypse. If you are changing the time frame the text lends itself to the French Revolution, which would make this dreary play seem much more palatable. Instead we get garbage cans, a burnt-out car and litter thanks to Beowulf Boritt’s dominating metal playground, which seemed more like Cats. Add to that Jessica Paz’s sound design and Dan Moses Schreier’s percussive musical score, that is played at ear shattering decimals. Kaye Voyce’s costumes, are thrift store left overs and oddly enough there is no class distinction.

I am seriously looking forward to Hercules August 31-September 8.

Suzanna BowlingJuly 28, 2022
Read More
Scroll for more
Tap
Catch These Shows Before They Close in August
He Says: Free Bloody Bloody Coriolanus in the Park – Shakespeare to be Proud Of